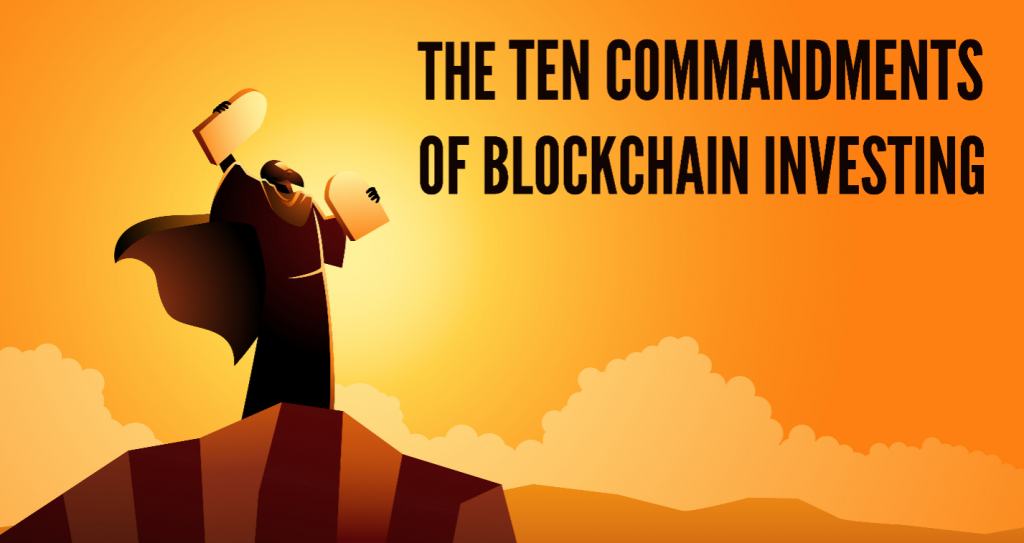 When I wrote my blockchain investing book in September 2018, I laid out a Blockchain Believers Portfolio, which was smart and simple:

That’s it. Set it and forget it.

The goal was to make it super-easy for everyday investors to build long-term wealth: blockchain for everyone.

I couldn’t get any financial advisers interested in the Blockchain Believers Portfolio.

I couldn’t get any bankers interested in the Blockchain Believers Portfolio.

I couldn’t get the financial media interested in the Blockchain Believers Portfolio.

Zero interest. Not even a, “Huh.” I felt like the wild-eyed, grey-haired prophet shouting in the city square, while people just went about their business:

Slowly but steadily, this strategy has made money—much more money—for investors who have believed in it. Believers have outperformed the Non-Believers, even while the old-school financial advisers stood by and watched in disbelief.

Today the new “financial advisers” are content creators on Reddit and YouTube, pumping up meme stocks and overhyped NFTs. Those guys at r/WallStreetBets sound like they know what they’re talking about, until you realize they’re encouraging you to buy Gamestop stock at $200 a share.

It’s madness on both sides: either crazy conservative, or crazy risky.

Those of you who have faithfully followed the Blockchain Believers Portfolio have pursued the “Middle Way.” You’ve been rewarded with slow and steady growth, enjoying the benefits of bitcoin while saving yourselves a lot of money, heartache, and stress.

Let’s check in on how this simple strategy has worked for the “blockchain believers” after the first quarter of 2021 – compared with the “non believers” who invested in stocks and bonds only.

The numbers speak for themselves. So why aren’t more bankers on board the bitcoin bandwagon?

Your Banker Secretly Believes in Bitcoin

My wife and I were at our old-school bank just last week – LAST WEEK! – and the young banker was trying to pitch us on their Wealth Management services … again.

“Yeah, we don’t do that yet,” said the young banker. He lowered his voice. “Some of us do believe that crypto is the future, but it just takes time at a bank like ours.”

“Please don’t say ‘regulatory uncertainty,’” I interrupted. “It makes me break out in hives.”

“So you own some bitcoin, huh?” he asked.

“This is the same bank where we sent a wire transfer to Belarus to buy our bitcoin back in 2013,” I said.

“Please don’t get him started,” my wife pled.

“I brought over a copy for the bank when the book was published,” I replied.

“The story is in the opening chapter.”

“I believe I bookmarked it.”

“The bookmark had a code to open a Coinbase account and redeem $25 in free cryptocurrency.”

“So you might say I was paying the bank to read the book.”

“Did anyone read the book?” he asked, fidgeting uncomfortably.

“I think you’re answering that question.”

I understand that it’s difficult to accept bitcoin at a large commercial bank. But, come on guys. You should at least have a gameplan by now. “Wait and see” is not a gameplan. You don’t see Tom Brady, 4th quarter, down by 6, at the 20-yard line, saying, “Hey, let’s just wait and see how it all plays out.”

The Blockchain Believers Portfolio is a gameplan. The banks can still help their customers with the stocks/bonds piece, then send customers to Coinbase to invest in bitcoin. (If they’re really smart, the banks will invest in Coinbase stock on the side.)

Remember: we don’t make any money on the Blockchain Believers Portfolio. It’s not a “product.” It’s just a simple, common-sense strategy that anyone can use—even banks.

On the other side of the spectrum we have the idiots of Reddit, who continue to pump Gamestop stock, Dogecoin, and NFTs, among many other dubious investments. (I love Reddit, just not for just not for financial advice.)

As opposed to the highly-regulated, professionally-licensed world of wealth managers, anyone with a keyboard and opposable thumbs can post to sites like Reddit, YouTube, or SeekingAlpha. Importantly, you don’t even know who they are. They don’t have to reveal their real names!

This means if you blow all your money on their ridiculous fan theories, there’s no one to blame except yourself. It also means you never really know if they’re working for you, or secretly working for some hedge fund or crypto startup. It’s sketchy McSketchville.

I do this stuff professionally, and even I understand only a handful of the stocks and blocks out there. Some of these new DeFi projects sure look like easy money, until they’re followed by an “incident report” that explains why everything went wrong.

… has created a “perfect storm” for investors to lose a lot of money.

And it’s not just noobs: I spent half the week excitedly researching a new early-stage DeFi project, only to learn about a “smart contract bug” revealed by its “pseudonymous founders.” (Translation: you could lose all your money, and have no idea who’s behind the project.)

This stuff is tricky, which is why the Blockchain Believers Portfolio still remains the gold standard. It’s how you combine the worlds of traditional and digital investing – the “stock market” and the “block market” – with one simple strategy that has worked.

The Health and Wealth Portfolio: One Year Update

Occasionally, we talk about specific investing ideas, for those who have a little more time or interest. One year ago, for example, we unveiled our Health and Wealth Portfolio, at the beginning of the Covid-19 lockdowns.

Again, it was a simple and straightforward strategy: invest in four well-run companies that were likely to do well during the pandemic: Amazon, Netflix, Zoom, and The Clorox Company.

One year later, here’s how those four stocks have performed:

It seems like common sense now, but hindsight always does. At the time, the markets were melting down, people were stockpiling toilet paper, and Zoom was the sound a car made. Nobody was thinking about investing.

But to beat the market, you’ve got to bet against the market: to zig when everyone else is zagging.

Those of you who invested in these stocks put your money to work in companies that work.

To summarize our performance so far:

Investors who have followed the Blockchain Believers Portfolio have enjoyed handsome returns of up to 78% since 2018, versus those who stuck with stocks and bonds, which increased by only a third that much (27%).

Investors who jumped on the Health and Wealth Portfolio one year ago have enjoyed even handsomer returns of 89%, nearly doubling their money in just one year. They’ve put their money to work in the companies that work.

The 10 Commandments of Blockchain Investing

I’m not a financial adviser, so I can’t tell you what to do. I can only tell you what I do, in the form of these ten guidelines for blockchain investing:

This is the Middle Way: not too conservative and not too crazy. It’s a path that we can all follow.

John Hargrave is the author of Blockchain for Everyone: How I Learned the Secrets of the New Millionaire Class, which tells the origin story mentioned above.