If you’re new to investing in the world of bitcoin, this page is your quick-start guide. We’ll explain what you need to know, using colorful analogies and plain-English descriptions, so you confidently explain bitcoin to your friends and colleagues.

In this Bitcoin Investing 101, you will learn:

Our goal is to make bitcoin accessible to all investors, so you can make great investment decisions and become healthy, wealthy, and wise.

So, let’s jump right in!

Bitcoin is a borderless, decentralized digital currency that runs on a decentralized peer-to-peer network. Anyone across the globe with an internet connection can use bitcoin to store, send and receive money in digital form.

In other words, Bitcoin is money for the internet.

This is why we call this asset class “digital assets.” To help you understand these new assets, we’ll describe them in terms of traditional assets. None of these analogies are perfect, but they will be useful in explaining this new world of investing.

Bitcoin is like gold. Gold is a store of value: investors buy it in the hopes that it will retain its value, even in times of economic uncertainty. Unlike gold, however, bitcoin is digital. Let’s say you’re a Syrian refugee: you could store your savings in bitcoin, then “cash out” when you land safely in another country. If you put your savings into gold, it would be difficult to smuggle gold bars in your pants.

Bitcoin is far more volatile than gold, however. It is a roller coaster ride, where the valuation can literally be cut in half – or doubled – in a month’s time. This is due to the wild speculation on the future of bitcoin, and digital assets in general. In time, these assets will stabilize.

Bitcoin is like a stock. Investors buy bitcoin in the hopes that it will increase in value, like a traditional security. Unlike your country’s stock market, however, it’s a global phenomenon: bitcoin never sleeps.

Let’s be clear: Bitcoin does not entitle you to ownership in a company. You do not receive dividends. “So what do I really own?” you might ask. Well, you own bitcoin. And because investors around the world believe that bitcoin has value, it does. This means you can buy and sell it at any time, like a stock – hopefully at a profit.

Bitcoin is like email. Years ago, if you can believe this, we used to mail paper. It was expensive and required three days to deliver. The first time people used email, they were suspicious at how easy it was: you just type in an address, hit “Send,” and it gets delivered? Instantly? How do you know for sure?

To send or receive bitcoin, you just mail it to an address like this: What gets complicated is people trying to explain all the technology going on “under the hood.” It’s really not that important, any more than it’s important for you to understand the layers of internet protocol that make email possible. You don’t need to understand internal combustion to drive a car.

Why is Bitcoin Worth Anything?

Bitcoin can be used to pay for things; for example, you can use it to buy goods on Overstock. But most people don’t use it this way, because of the extreme price swings.

To explain why, take a look at the $100 million pizzas. One early bitcoin developer, Laszlo Hanyecz, came up with a clever idea: he would send someone 10,000 bitcoin to have a pizza delivered. Another bitcoin user took him up on the offer. Back then, bitcoin was worth practically nothing, only interesting to hobbyists and geeks, so it probably seemed like a fun stunt. Laszlo sent him the 10,000 bitcoin, and a short while later, he got the piping hot pizzas pictured above.

There are two ways to look at this story: the first is that Laszlo overpaid for the pizzas. (At least he got toppings.) The second is that he proved that bitcoin had value. By buying a physical good with bitcoin, he kickstarted the entire crypto economy. In a sense, he created value out of “thin air.”

This concept is important because many digital assets today are creating value out of “thin air.” It’s not really that simple, of course. There’s a lot of innovation, coding, and brainpower going on to make that bitcoin/pizza transaction possible. But there comes a moment when someone says, “You know what? This is actually worth something, and here’s what I’m willing to give you for it.”

Bitcoin has value because we agree it has value. An economist will give you a two-hour lecture on what gives a currency value, but it really boils down to agreement. (Tell this to your economist friends. It will drive them nuts.)

The problem is that we don’t know how much value these new digital assets should have, which is why prices are all over the map. They’re totally new. Who wants to spend 10,000 bitcoin to buy a pizza, when in a few years that same bitcoin might buy Paraguay? For this reason, bitcoin can be used as a digital currency in theory, but it is not used very much in practice. People tend to either buy and hold, or buy and trade – like a stock.

May 22 is Bitcoin Pizza Day, by the way. Mark your calendar.

What is the Blockchain? 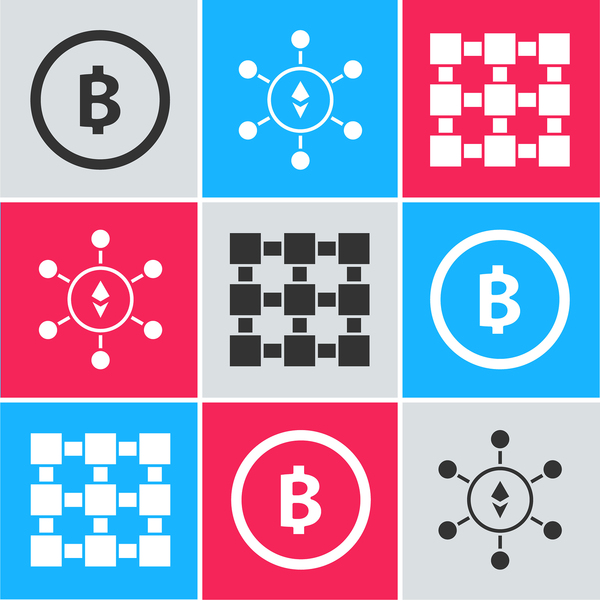 The innovation at the heart of bitcoin is called the blockchain. Again, let’s use some analogies.

Blockchain is like a checkbook. Imagine a global checkbook, a global accounting ledger, where everyone can see all the debits and credits. It’s a completely open book, so everyone can confirm that the checkbook is balanced at all times. The blockchain is similar, with computers worldwide constantly recording who’s bought and sold bitcoin (and other blockchain assets).

This “distributed ledger” means that no one person, company, or government controls the blockchain. Like the internet, this financial accounting is distributed. This is profound, as it means no one can “cook the books,” and everyone has transparency into the complete history of each bitcoin.

Blockchain is like the Internet. Like the internet, blockchain is distributed worldwide, across millions of computers. This means that no government can completely shut it down. Like China, they can regulate it, but the genie is out of the bottle. No one can completely put it back.

It is unlikely that governments will make bitcoin illegal, because the innovation and financial opportunity would simply move elsewhere. If the U.S. government were to outlaw the Internet, the next Facebook would simply get created in Russia. But it is likely that it will become more regulated. Today it’s like the Wild West.

Blockchain is like Android. Like the operating system on your smartphone, blockchain is a technology upon which you can build other apps. People are excited about blockchain because it can be used for so many applications that currently require middlemen: banks, loans, mortgages, real estate, identification, insurance, and on and on.

Again, these are imperfect analogies, but they give you the gist. But here is blockchain’s biggest contribution to the human race: blockchain has the power to create scarce digital assets.

Most digital assets can be freely copied, at zero cost, with no loss in quality. Let’s say you’re a Bob Dylan fan. You’ve got everything Dylan has ever recorded, every cover, every bootleg, nicely organized in MP3 files on your hard drive. You meet another Dylan fan, and ask, “Do you have the Springsteen Kennedy Center cover?” He says no, so you email him the file. And while you’re at it, you zip up your entire Dylan collection, transfer it to your cloud drive, and share it with your new friend.

You’ve just ripped off Bob Dylan by stealing everything he ever recorded. Look at him up there. Look how sad he is. But that is how digital assets work.

Blockchain is different. Because the “shared checkbook” — or global ledger — has to keep track of everything, we can’t just make free copies and give them away. It’s as if Dylan recorded a copy-proof album, then only made 100 copies. Anyone who wanted to listen to those copies would have to buy it from someone who already owned it. You can see how the price would increase astronomically.

In this respect, bitcoin is an improvement on traditional currency. Governments can freely print money whenever they feel like it, thus devaluing the current supply. (If Dylan suddenly released another 500 of his “limited edition” albums, the value of each album would deflate.) There will only be 21 million bitcoin, ever.

Scarce digital assets are a real innovation. They make possible all kinds of things: new types of money, deeds, wills, corporations, and legal structures. The times, they are a-changin’. The other reason people are so excited about bitcoin is because it has an epic origin story. It’s better than Spider-Man, Iron Man, and Batman combined, because it is completely true.

Bitcoin was created by the mysterious ­­­­Satoshi Nakamoto. Nobody knows if that was the person’s actual name (unlikely), or a pseudonym (more likely), or if it was a group of people (even more likely).

In 2008, Satoshi published a technical document outlining the basics of bitcoin, and by 2009 had launched a working prototype. He attracted a small core team of developers, who worked with him on developing the bitcoin software. He frequently communicated with them, gradually handing over control of the software and website. In 2010, Satoshi signed off for good, and has not been heard from since.

Satoshi has about one million bitcoin, which he hasn’t touched. (Remember, we can see everything that happens on the blockchain.) This makes him currently worth over $8 billion USD, one of the richest people on earth — if he ever comes back to claim it.

Journalists from leading news organizations have been trying to uncover Satoshi’s real identity ever since. You can read an entertaining list of conspiracy theories on Satoshi’s Wikipedia page. Was it a single coder? Or a government agency? Or an advanced alien technology? It’s fun to think about. How digital assets can create a value cycle.

This origin story is part of the allure of bitcoin, which drives interest, which drives discussion, which drives perceived value, which drives actual value. As digital asset investors, we’re looking for these virtuous circles. These “value cycles” take many forms, including crazy origin stories. Who would create this world-changing technology, become one of the richest people on Earth, then disappear without a trace?

It’s one of the greatest mysteries of our time. Welcome to bitcoin.

How Do I Invest in Bitcoin?

If you’re curious to learn more, we’ve got a whole site for you. Bitcoin Market Journal is committed to helping you make great investment decisions in the world of digital assets. We are independent (note the lack of ads), which means you can trust what you read.

The best way to learn about bitcoin is to buy some bitcoin. You’ll have skin in the game, and you’ll soon find yourself talking about it to everyone you know. You’ll get bitten by the bitcoin bug.

For next steps, please read:

To stay up-to-date with the latest trends and developments in the digital asset market, subscribe to the daily Bitcoin Market Journal newsletter.