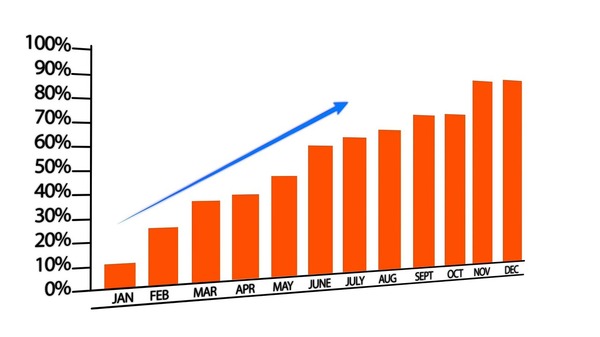 Proof-of-stake (PoS) coins have become increasingly popular among investors for providing the ability to earn “interest” in the form of new coins, additional to any potential capital gains.

In this article, we look at the top five PoS coins (measured by ROI) that you could potentially add to your portfolio in 2020.

What to Look for in PoS Coins

When considering an investment in PoS coins, you need to choose your investment carefully. Pay attention to at least the following five factors:

Based on the above factors, the Bitcoin Market Journal team has compiled a list of five of the most attractive PoS assets.

Dash may not be a purebred PoS coin, but it allows for staking by operating a masternode. Dash is also a high market cap asset with respectable trading volumes. As such, it is one of the most established coins on this list.

Looking at a three-year time horizon, DASH’s ROI has been impressive. DASH rode the 2017 bull market and weathered the ensuing bear market in 2018 relatively well. From a price of $11 in September 2016, it is currently trading at $89. That translates to a three-year ROI of 709 percent.

The YTD picture, on the other hand, looks more promising. From $79 at the beginning of the year, Dash has added some $10 to its value, which translates into an ROI of 12.6 percent year-to-date.

The advantages of Dash staking:

Another high market cap/trading volume coin that can be staked for additional income is NEO (NEO).

Chinese born and bred, NEO does not shine in the staking yield department. To reap healthy rewards with this asset, you will need to stake quite a bit of it.

NEO staking is based on the GAS reward token. Stakers can store GAS in their NEO wallets. It bears pointing out that the NEO staking reward has nosedived over the past year. The yearly yield is now at the 1.52 percent mark.

The 1-year ROI picture is much direr. Last September, NEO was trading around $18, hitting $19 at one point. It has since shed around $10 of its value. That one-year -49.1 percent ROI does not taint the long term performance picture of the digital asset though.

The YTD outlook is slightly more bullish. From $7 at the beginning of January, the coin is now worth more than $9, having generated a year-to-date ROI of 30.7 percent.

Ontology is an open-source, two-token smart contracts and dApps platform. In addition to the ONT token, the platform also uses ONG (Ontology Gas). Staking rewards are delivered in ONG.

The minimum required amount for staking is just 1 ONT. Investors will need 500 ONT as collateral for staking authorization. To run a node, a minimum of 200,000 ONT is required.

Year-to-date, however, the asset has registered a slight rebound, from $0.59. This might be a sign of a turn-around. The YTD 28.8 percent gain is in line with better performing altcoins this year.

The advantages of ONT staking:

PIVX (PIVX) is a privacy-focused cryptocurrency that comes with an attractive staking yield. Unlike some of the detailed staking options, however, PIVX is not a large market cap/trading volume coin.

The minimum staking amount is 100 PIVX. Those looking to run a masternode will have to provide a 10,000 PIVX collateral. At current prices, that is still affordable as well.

The one-year ROI paints a different picture. Last September, the price of PIVX was $0.91 and it later climbed to above $1, only to eventually drop to where it currently is. This one-year ROI of -68.1 does not look out-of-place, however, considering the presence of the bear market over the period.

The YTD picture is equally dire. The price dropped from $0.85, feeling the full chill of the crypto winter, for a YTD ROI of -65.8 percent.

KuCoin Shares is the token of a centralized digital asset exchange. Through it, investors can potentially profit from the success of the exchange itself. They can buy and hold KuCoin Shares looking for its price to go up. They can also stake their coins and pick up dividends. The dividends originate from the trading fees.

The minimum required staking amount is 6 KCS. Staking KuCoin Shares is extremely easy. All you need to do is to buy them on the exchange and leave them there. You can use bitcoin (BTC) to buy KCS.

KCS is one of a handful of coins where the 1-year ROI is positive. Its price last September was $1.11. That translates to a one-year ROI of 56.7 percent.

The same goes for the YTD picture. In January, one KCS was worth $0.62. The YTD ROI of 180.6 percent looks impressive.

Join the Bitcoin Market Journal newsletter to follow the latest trends and developments in the digital asset markets.