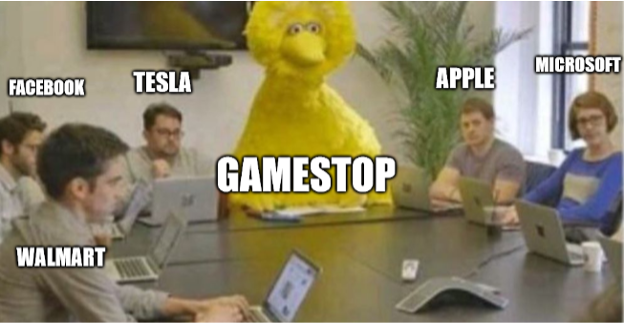 If you haven’t followed the drama around GameStop (GME) stock this week, I’ll explain briefly what happened, how it happened, and who’s going to emerge the winner from this (hint: it’s not GameStop). I’ll also explain why smart investors are staying out.

The GameStop Drama Started as a Comedy

Investing 101: smart investors understand what they are buying. When you buy stock in a company, think of it like buying the company itself. Is it a good company that makes a good product? Is it run by good people? Does the company have good financials and a bright future?

In the case of GameStop, investors thought it would be funny to do the opposite: to buy an aging brick-and-mortar videogame retailer based largely in shopping malls, during a pandemic. If you remember the final days of video rental stores, just think of buying stock in Blockbuster Video during its last year.

It started as a joke. Remember that.

For most of the past year, Gamespot’s stock price has been stuck around $4, because investors understood the company was not in a good position:

I visited a GameStop a couple of months ago, and it wasn’t a great experience. I had to wait in line (only a few people allowed in at a time), the layout of the store was confusing, and I couldn’t find any videogames that I wanted.

A week or two later, I signed up for Xbox Game Pass, the streaming service that allows you instant access to a huge videogame library (think Netflix for videogames). It has been a terrific service for just $10/month. Based on this experience, I’d sure think about investing in Microsoft (MSFT), the makers of Xbox. Gamespot (GME), not so much.

This is how smart investors think: “Xbox Game Pass is terrific, I wonder who makes it. Hmm, Microsoft looks like a solid company, and they continue to innovate. They have a good management team. A lot of people think they’re boring, which is even better.”

So why did investors drive up the price of the aging GameStop (the Blockbuster of videogames) from $4 to over $200 as I write this?

Enter the gamblers at r/WallStreetBets.

I’m a fan of Reddit, the world’s largest message board. I browse it every day over breakfast, just after I read the news headlines, because it gives me quick insight into “what the internet is thinking,” a glimpse into the human hive-mind.

On Reddit, people have created millions of discussion forums on every conceivable topic, from photos of cute animals to funny videos to interesting crowdsourced questions. Then are communities around badly designed objects, ill-advised craft projects, and of course bitcoin.

The r/WallStreetBets forum is a place where guys (mostly guys) make ridiculous bets on the stock market. Generally these are testosterone-fueled, YOLO-style bets backed up with screenshots of their stock trades and their crazy winnings (not so many brag about their losses).

The community has its own culture, complete with insider lingo, attitude, and memes. Lots and lots of memes. The community describes itself “like 4chan with a Bloomberg terminal,” and that’s pretty accurate. They’re Internet trolls, but they’re also very smart about how markets work.

They noticed that a number of hedge funds (read: large investors) had placed short positions on GameStop. The simple way to think of a “short” is that you are betting that the price of a stock will go down—it’s perfectly legal, though you are essentially profiting off someone else’s failure.

In the case of GameStop, the hedge funds had aggressively shorted the stock, meaning they had bought more short positions than there were shares available. In simple terms, they felt so sure about GameStop’s impending demise that they overloaded on the bet.

The r/WallStreetBets community saw an opportunity. If they could drive up the price of GameStop stock, they could essentially force the hedge funds to buy back their short positions (meaning hedge funds would lose a lot of money, and paradoxically drive the price of GME up even further).

And that’s exactly what happened.

It may help to watch the end of the classic 1983 comedy Trading Places, which has a similar plot:

The gamblers at r/WallStreetBets did something else: they convinced Redditors that buying GME stock was a way to “stick it to the man.” They framed it as a populist movement to punish the hedge funds for stealing from the little guy all these years. Eat the rich!

They tapped into one of the most primal human emotions: revenge.

By inciting the mob into a kind of gleeful vengeance, it became easier for everyday investors to buy GME, not as an investment but as a kind of political statement. And as the price began to skyrocket, it became an easy way to get rich AND stick it to the man: the thrill of gambling, the fun of a prank, the satisfaction of revenge.

This mob revolt was enabled by easy stock-trading apps like Robinhood, which saw such heavy demand that they were forced to halt trading. (Note: if you don’t want investors to steal from the rich, YOU MAY NOT WANT TO NAME YOUR APP ROBINHOOD.) This further fueled the FOMO fire, as Redditors cried foul about not being able to buy even MORE inflated Robinhood stock. All the while, the r/WallStreetBets community urged the gamblers to HOLD, HOLD, HOLD!

Lots of drama, and I’ll admit that it is incredibly tempting to buy into it. (“With all this media attention, the price of GME will definitely keep going up, right?”) But this is not investing, it’s gambling – and like all gambling, it’s a fool’s game.

True, a couple of hedge funds did indeed get screwed (someone may have to sell a yacht). But who will get screwed the most? Not the big hedge funds, but ordinary investors. Again.

I feel like we need a moment of head-clearing sanity, so let’s take a deep breath and review the basics. 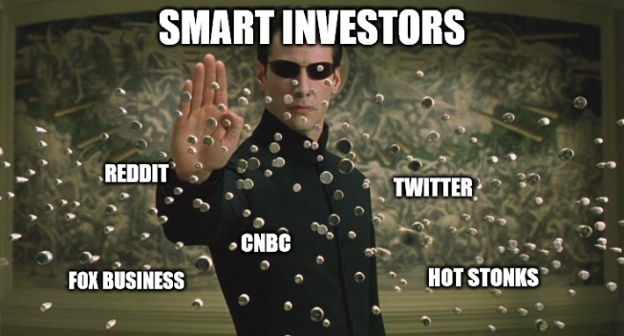 As an investor, you need to create a mental force field around yourself, avoiding the mob mentality of crazes and bubbles like this one. You are Neo from The Matrix and your force field can stop all mental bullets. Now power up your force field with these thoughts:

At that point, you’ll be left holding your $300 GameStop shares, which are once again now trading for $4 or $5. Meanwhile, who made off big? Could it have been the gamblers on r/WallStreetBets who whipped you into this frenzy?

The r/WallStreetBets community has really perfected this new type of “information warfare.” They are grinding out clever memes that use pop culture images and video clips to have real-world impact – in the same way that r/The_Donald created memes that helped Donald Trump rise to power.

The hedge funds should be afraid not of r/WallStreetBets, but this rising form of mass communication that latches onto human brains, like a virus. The physical mirrors the mental: just as we have a novel form of Coronavirus, these political and financial upheavals are caused by a novel form of mental virus (memes).

So what can be done? As smart investors, we simply stick with the basics.

Best of all, these principles hold not just for the stock market, but also for the block market, the new world of bitcoin and digital investments.

There’s one more reason for investing this way: it feels good.

It can feel briefly satisfying to buy your overinflated GME stock, imagining that you’re beating the rich at their own game. But it feels much better to know that you’re investing in companies that you care about, that you genuinely believe are changing the world for good.

It’s the joy of building, vs. the temporary pleasure of tearing down.

To be sure, Wall Street engages in a lot of bad behavior, and some institutions do need to be torn down. But in this little GameStop morality tale, we have to ask: who’s really being played? A few early GME investors at WallStreetBets will make out big: essentially stealing from a lot of everyday investors who will end up losing a lot of money.

For smart investors, building feels better. For everyone else, it will be a good lesson in the difference between gambling and investing.