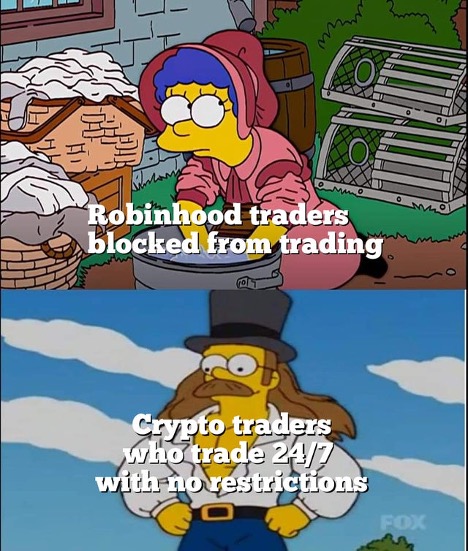 In my Part 1 of my series on meme stocks, I explained how Elon Musk is using the new communication form of Internet memes to drive up the price of both Dogecoin and Bitcoin. The TL;DR version is:

If we could learn to create great memes to support great investments – to use the power of memes for good – we could help create a new generation of memevestors.

Instead of the “slope of ignorance” trapping unwitting investors who want to get rich quick, we can have a “slope of enlightenment” educating them on real value: getting rich slowly.

A “slope of ignorance” or “slope of enlightenment” may look the same from the outside, but they’re completely different. One rewards junk; the other rewards value. One promotes the bad; the other promotes the good. One is driven by cynicism; the other idealism.

How do we flip this model? In short, by creating a better memeconomy.

How to Create a Better Memeconomy

In  Part 1 of this series, I described how memes are anything that copy themselves from brain to brain: not just funny photos, but viral videos, catchy songs, catchy ideas, catchphrases. You will recall Finkelstein’s formula of meme effectiveness (which I’ve simplified slightly):

The quality of a meme is its ability to propagate,
and how long those copies persist,
to influence behavior.

But how do we create memes that both propagate and persist, AND influence behavior? Fortunately, my day job is in marketing, and marketers have been doing this for decades. (What is marketing but meme-making?)

1) First, memes need a way to get in. For example:

2) Next, memes need a way to copy themselves with fidelity. For example:

3) Next, memes need a way to spread themselves to other minds. Here are a few common tricks:

Let’s bring these to life with a real-world example meme.

How a Meme Spreads and Evolves

In the end, Steven Crowder created an extremely successful meme with his table stunt – though perhaps not in the way he expected. (Remember: good meme creators lose control of their creations.) Does it really matter that it mutated from conservative politics to Minecraft? The idea got copied, all the same.

To me, that idea was not male privilege, but the look of satisfied smugness on Crowder’s face: an expression that might be translated I know it all, and you have to prove to me why I’m wrong.

So what might be the positive equivalent of this meme? It might be one that encourages the human virtue of Open-Mindedness, perhaps “Let’s Discuss” instead of “Change My Mind.”

Again, memes always have an underlying message, even if the creator is not consciously aware of it. This is why I encourage you to develop the habit of translating memes into plain English. Think about what they’re really saying.

Memes don’t care whether their message is positive or negative. They’re like viruses: they just want to spread.

But as humans creating and sharing these memes, we are like bio-hackers that can either use our powers for evil or for good. We’re injecting ideas into people’s brains: we can make them either viruses or vaccines.

How to Use our Meme-Making Powers for Good

You may have noticed that every issue of our daily newsletter starts with the catchphrase “Health, Wealth, and Happiness.” It’s a meme.

It’s easy to remember, because the first two words rhyme. It sounds kind of like the old saying, “Early to bed / early to rise / makes a man healthy, wealthy and wise,” which already has hooks into your brain. And it’s the first thing you see in our newsletter, getting your brain stuck in this positive thought loop.

This is how a meme can be used to positive ends, especially since we really believe these things. We really do wish health, wealth, and happiness for everyone – why not? And by putting it at the top of every newsletter, it also reminds us why we’re here. It’s a vaccine, not a virus.

In the marketing world, we have something called a “Campaign Brief.” This is a short document delivered to the creative department before they start work on a new TV or radio ad campaign (which, remember, are essentially meme campaigns). It explains the message they’re trying to communicate.

At our parent company Media Shower, we have a similar Campaign Brief, updated for the meme generation. We call it our “Meme Playbook,” and here’s what it contains.

Primary Message: A one-sentence message that is clear, actionable, and inspiring.

Message Points: 5-10 message points that can be used as “springboards” for blog posts and social media.

Hashtags: 3-5 popular hashtags that we can use to “piggyback” our message on Twitter.

Character Strength: The critical component for creating good memes, these are the 2-3 positive human values that we will call upon with this message. (List of character strengths here.)

Communication is more effective when it’s tied into the Great Human Values.

Pop Culture Tie-ins: Are there crossover franchises (The Matrix, It’s Always Sunny, Spongebob) that we can mash up?

Cognitive Dissonance: Is there any element that will make the brain “trip up” and take notice?

Authority: Is there any element of “authority” that will encourage people to copy and share with fidelity (tradition, “the Truth,” other memeplexes)?

Repetition Frequency: How often will we post this meme?

Viral spread: How will we encourage it to be copied and shared, without explicitly asking for it?

The Meme Playbook in Action

A real-life example will help. Let’s say we want to spread the idea that “bitcoin is digital gold.” Our Meme Playbook might look like this:

Primary Message: Bitcoin is like a digital version of gold: it’s valuable, scarce, and will hold its store of value over the long term.

Viral spread: We will write a series of articles about this meme campaign, and ask subscribers to create their own.

Putting it All Together

We believe in transparency. Rather than creating these memes in a shadowy underground lair, we’re operating in bright sunshine. Now you understand exactly what we’re doing, and why we’re doing it.

And now that I’ve written a series of articles about this meme campaign, I ask you to create your own. Feel free to like and share the memes below.