He’s not only trying to move the planet to electric cars, he’s trying to get humanity to Mars. This “cars and Mars” strategy, of course, requires a lot of money. Fortunately, Musk has perfected the art of meme marketing, first driving up the price of Tesla stock, then recently dogecoin and bitcoin.

Today I’ll take you on a weird trip that explains how meme marketing works, how Elon Musk uses it so effectively, and what this all means for bitcoin investors (short answer: it’s good news).

What is Meme Marketing?

First: memes are not what you think.

The original meaning of “meme” was any idea that copied itself from brain to brain. That includes methods to make fire, styles of architecture, languages, songs, catchphrases, recipes, and even baby names. Like genes, some memes are short-lived (think fads or fashions), while some endure for centuries (think the Pledge of Allegiance or the Lord’s Prayer).

The current meaning of “meme” is much narrower: it’s any funny photo or video that goes viral. Take these common examples (courtesy Memes.com):

The “meme generation” (let’s say anyone younger than Millennials) collect these memes on their phones and share them on social media sites like Reddit. Memes age quickly, so these examples would be considered ancient: like slang, you’ve really got to keep up.

Memes are how the Internet generation communicates. To communicate well, marketers have to learn how to use meme style in a way that’s funny, not forced. That’s another one of Elon Musk’s superpowers: unlike most marketers, he actually knows how to create great memes.

What Makes a Great Meme

No joke: the U.S. military is studying memes. It understands the power of memes to change minds and influence behavior, especially among young people. It calls this new area of research “memetic warfare,” which sounds something dreamed up by Monty Python:

In 2011, military researcher Dr. Robert Finkelstein conducted an exhaustive study on memes on behalf of the U.S. government. In his excellent 150-page slide deck, he defines four criteria that make good memes:

The quality of a meme is its ability to propagate,
and how long those copies persist,
to influence behavior.

Marketers, of course, have been doing this for decades. What is marketing but meme-making? Every TV commercial, every magazine ad, every product slogan is meant to be a meme. By design, advertising is information that propagates, persists, and has impact: it gets us to buy the product.

In fact, “branding” – that elusive goal that everyone wants but no one can quite define – is nothing more than a huge collection of memes. Think of a brand like Coca-Cola: all the images, slogans, packages, commercials, and vending machines you’ve seen over the years have implanted Coca-Cola like a massive virus in your brain. That’s a brand.

In her terrific book The Meme Machine, author Susan Blackmore calls these huge clusters of memes a “memeplex.” Elon Musk himself is kind of a memeplex. But how did he get there?

Memes are a “Virus of the Mind”

Richard Brodie’s book about memes is literally called Virus of the Mind. Despite the book’s title, he argues that we can engineer good memes to move our lives in a positive direction (think affirmations and positive thought loops). Whether they’re helpful or harmful, good memes are contagious.

Here’s a weird idea: your thoughts are not always your own! You “catch” thoughts; you are “infected” with them. You even talk about a “catchy” song or “catchphrase,” just as you talk about “catching” a cold.

The way a virus works is by hijacking the “machinery” of your cells to make its own copies. It literally moves into your body’s cells and takes over the factory, then starts churning out infected copies of itself. Memes – whether they’re harmful or helpful — do the same thing: they move into your brain, and from there they spread through your words, Facebook shares, and tweets.

You don’t immediately know whether the programming you get from a meme is harmful or helpful. You don’t know whether it’s a protective virus, or Covid-19. The meme could inspire you to end racism, or to overthrow the government.

That’s why meme creation is literally like a superpower: we’re either engineering superviruses that will take over the world, or vaccines that will make humanity super-resistant. If you’re going to mess around with marketing memes, make the decision to use your superpowers for good.

Like the dinosaurs in Jurassic Park, well-engineered memes take on a life independent of their creator. A good meme will obey the laws of evolution, seeking to create new and better copies of itself, evolving over time. You quickly lose control of them.

While most meme researchers believe that memes (like viruses) are not living creatures, there’s another school of thought that says memes may actually be living structures, or even metaphysical entities (in which case they “want” us to create them well)!

Whether they’re living entities that infect our brains, or simply mental viruses, how does Elon Musk engineer these wildly contagious memes? Read on.

Like genes, memes pack a lot of information into a simple shorthand. I urge you to develop the skill of deconstructing memes: to explain in plain English what the meme is communicating. I do this with my kids all the time, and it drives them crazy. (“DAD, you’re ruining it!”)

Take for example this popular meme (at the time of this writing):

For investors, it is important to stay current on memes, because we are now seeing memes move markets: I need only point you to the GameStop frenzy, which was driven in large part by memes.

To stay current on memes, I urge you to bookmark Reddit’s r/memes, though r/popular is also popular. That said, meme culture moves quickly: few memes endure. So how does Musk make memes that propagate and persist?

First, they need a way to get in. This isn’t easy in a sea of trillions of tweets. Some of the factors that hijack the human brain are:

Any time you tell people what Elon Musk is doing, you are sharing his memes – not to mention the meme of Elon Musk himself. It doesn’t matter whether you approve or disapprove of what he’s doing:  you are infecting other brains. And if the meme is successful, those brains will infect other brains.

It’s just like a virus. But is the overall virus helpful or harmful?

Just a few years ago, Mars missions weren’t even on the table.

No one seriously considered it, except starry-eyed dreamers. The U.S. space program was in a state of decay: it seemed like there were too many problems here on Earth to consider something so audacious and ambitious. Then Musk came along.

Another one of Elon Musk’s superpowers is the ability to shape reality. Typically he makes an out-of-this-world proclamation, people ridicule him for a while, then (as the meme spreads and infects our brains), it becomes part of the global conversation.

Mars went from being an impossibility to being a possibility: that happened in less than a decade.

Electric cars went from an improbability to wild profitability: that happened in less than a decade.

If you know your Musk mythology, you know the story: he made his early fortune by merging X.com with PayPal, which was then acquired by eBay for $1.5 billion. He plowed all his winnings into SpaceX, almost lost it all, then got a lifesaving contract to fly supplies to the ISS, which saved the company. Also, in his infinite free time, he took over Tesla and turned it into the world’s most valuable carmaker.

Getting humans to Mars requires a lot of money: even the budget option is $6 billion. You might see each of Musk’s business successes as “stepping stones” to raising the capital needed to ultimately achieve his Mars ambitions: first PayPal, then Tesla, then SpaceX.

Along the way, the business magnate has found that he can use his Twitter platform to actually move markets. There was the infamous tweet where he said Tesla might go private at $420 per share: no one was sure if it was real, or just a joke about marijuana (see “cognitive dissonance” above):

The SEC gave him a slap on the wrist, but TSLA stock really did soar to $420, to which he responded with this meme:

Through memes, Musk is able to shape reality. While the SEC saw this as manipulation of the stock market, I think Musk set his sights on an even bigger opportunity: to manipulate the block market.

How Musk Drove Up Dogecoin

If he was hampered from tweeting about Tesla’s stock price, the rules wouldn’t hold in the new unregulated world of blockchain investing. Perhaps his initial support of Dogecoin, which was literally created to be a meme coin, was a test: would Dogecoin spike after Musk tweeted about it? 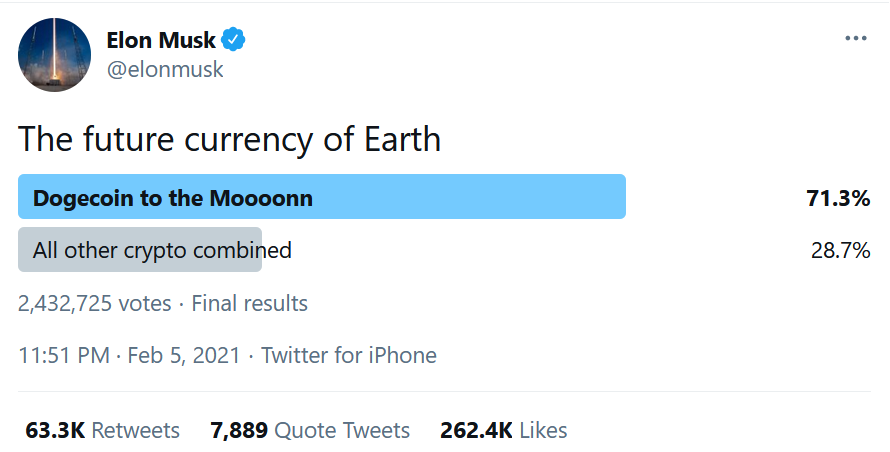 Tesla moved $1.5 billion of its corporate treasury (think cash on hand) into bitcoin, then Musk began to tweet about it, even announcing that you could soon buy a Tesla with bitcoin. Bitcoin price was already on a tear, and this was like minting money: Tesla’s bitcoin investment has jumped at least 22% in less than a week.

What does all this have to do with getting to Mars?

As smart investors in the stock market, we look for great companies that make great products, hopefully when their stock price is on sale. I drove a Tesla the other day, and I thought to myself, This is the perfect car. For me, Tesla is a great company that makes great products: it’s reducing our dependence on fossil fuels, and giving the auto industry a much-needed kick in the pants to move to electric.

As much as I may be in awe of Tesla as a company, I have to admit that the stock price is not cheap. But bitcoin? We still don’t know the ceiling on bitcoin’s price, and if Musk is going to start pitching bitcoin, then I have to believe it has room to grow.

As smart investors in the block market, we look for great blockchain projects that are adding value to the world. This is why I’m not buying Dogecoin, which is clearly a joke (even though its founder wrote a terrific post that sums up our value investing philosophy). But bitcoin, in my mind, has real value – and the possibility of more Musk memes will likely drive up its price even higher.

In summary, smart investors don’t buy “meme stocks” because they are memes, but because they believe in the value of the underlying company. This goes for the stock market, as well as the block market.

As an investor, always ask yourself: what am I really buying? Memes are like viruses that lodge in your brain, so try to think clearly. Would I buy this if r/WallStreetBets or Elon Musk weren’t tweeting about it? If the answer is “yes,” then memes might just drive up the price further, like TSLA stock.

Still: beware of bandwagons! The best case for investors is that you already hold the stock, and then people start memeing it. In the coming years, we can expect to see Wall Street firms deploying entire teams of meme specialists, corporate marketing teams to have meme managers, maybe even the first CMO.

In the battle for the human mind, meme marketing has just begun.