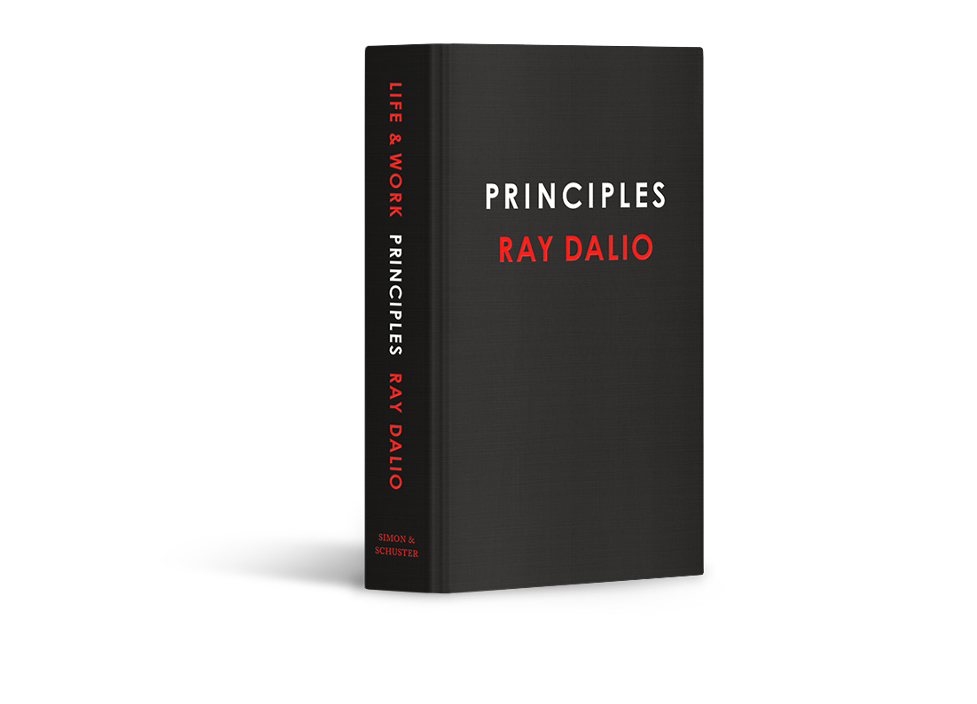 I’m an admirer of investor Ray Dalio, who founded Bridgewater Associates, the world’s largest hedge fund. It’s a fascinating origin story: as a young investor, Dalio was cocky and headstrong, making a number of lucky bets and quickly building Bridgewater into a successful investment firm.

“This game is easy,” he thought.

Then he made a bad market prediction – even going on national television to tell everyone about his prediction – only to find out that he was wrong. Bridgewater had made a bad bet, and he lost everything. (I can relate to this story, since it’s so similar to the story of my company Media Shower.)

Dalio had to lay off the entire company, except for one person: himself. Working alone from his kitchen, Dalio began to rebuild the company in a different way: by gathering different points of view, and trying through dialogue and debate to “find the truth together.”

At first, he collected these ideas in a Word doc and distributed them to employees as a PDF. Using these principles, Bridgewater became very successful indeed—causing some to wonder if Dalio was forming some kind of cult. The media began to wonder about the “secret document” that Dalio was using to indoctrinate his employees, so he made it freely available on their website.

Later this PDF was turned into a New York Times-bestselling book called Principles: Life and Work. I highly recommend the book (it’s on our Read and Grow Rich book list), or you can watch the 30-minute animated video, which is worth the time investment:

Dalio recently made headlines in the blockchain community by inviting the Twitter community to open his mind on bitcoin. (Watch Dalio’s thoughts on bitcoin and blockchain investing in this 2-minute video.) Our columnist Mati Greenspan wrote one of the most-retweeted responses to Dalio’s invitation.

My own view on Dalio’s question is simply that bitcoin is the “on-ramp” to the new world of digital assets (tokens, cryptocurrencies, and the like). We’ve compared this to the traditional stock market by calling it the “block market.”

Because bitcoin was the first blockchain project, and the most successful blockchain project (as measured by users and total market cap), it is typically the way that people are first introduced to the “block market”: they buy a little bitcoin. It’s like exchanging your dollars for Euros at the airport: suddenly, you’re part of a new economy.

I agree with Dalio that bitcoin is not a storehold of wealth. It has failed its original vision as a digital money, because the price is so unpredictable. I also agree that it is primarily held by those who are hoping the price continues to go up, but I hesitate to call them “speculators.” Here’s why.

…then I see it as a sensible long-term investment, not a short-term speculation.

Put another way, the mistake is in thinking of bitcoin in its original purpose (a universal digital money). Let’s think of bitcoin instead as an on-ramp to get people into digital money. From bitcoin, it’s easy for anyone to get into cryptocurrencies, tokenized assets, DeFi applications, and so on: a parallel universe of money.

In this model, the biggest threat to bitcoin is that someone else comes up with a better blockchain on-ramp. In my view, this is likely. But where are these solutions today? Facebook Libra is tangled up in the nets of regulators. Central Bank Digital Currencies are coming, but they’ll be national (bitcoin is global). Stablecoins are making it easier to stablize the price of digital assets, but bitcoin has the biggest brand.

Technology moves quickly, but I can’t see any bitcoin killers on the horizon. That’s why I invest.

In the spirit of Dalio’s principles, I’ll recap some of the blockchain investing principles that I write about frequently (explained in more detail in my investing book). Like Dalio, I’ll also reveal some of our early mistakes, and what we learned from them.

When we started this newsletter during the great Blockchain Boom of 2017, we spent a lot of time trying to analyze Initial Coin Offerings. The problem is that it’s really hard to invest in a project without any users: you’re going on the team and an idea. In the stock market, this is “angel investing.” In the block market, it’s pretty much gambling.

It’s a better strategy to find established blockchain projects that are large and growing. Here the block market offers a huge competitive advantage to the stock market: it’s transparent. So you can see for yourself whether a blockchain “company” (read: project) is strong, healthy, and growing.

Principle 2: Understand the underlying “business.” Like investing in a traditional business, be able to explain what the blockchain project actually does. What unique problem does it solve? If it’s attracting lots of users, why? Can you try out the product or service yourself?

Here again, the early days of blockchain were rife with speculators, and “trading tokens” became a pastime, without any thought of the underlying value. This behavior caused a lot of people to write off the whole industry as a “scam,” but there is value: a tremendous amount. You have to do homework.

Way back in 2018, we created a “homework framework” with our Blockchain Investor Scorecard, which helps you analyze the strength of the underlying “business.” This framework has been academically published and peer-reviewed, and used by thousands of investors. We hope you find it useful.

Principle 3: Look for tokens trading at a discount. If Principle 1 is quantitative (analyze metrics that show you blockchains that are large and growing), and Principle 2 is qualitative (evaluate the strength of the underlying “business”), then Principle 3 focuses on price. 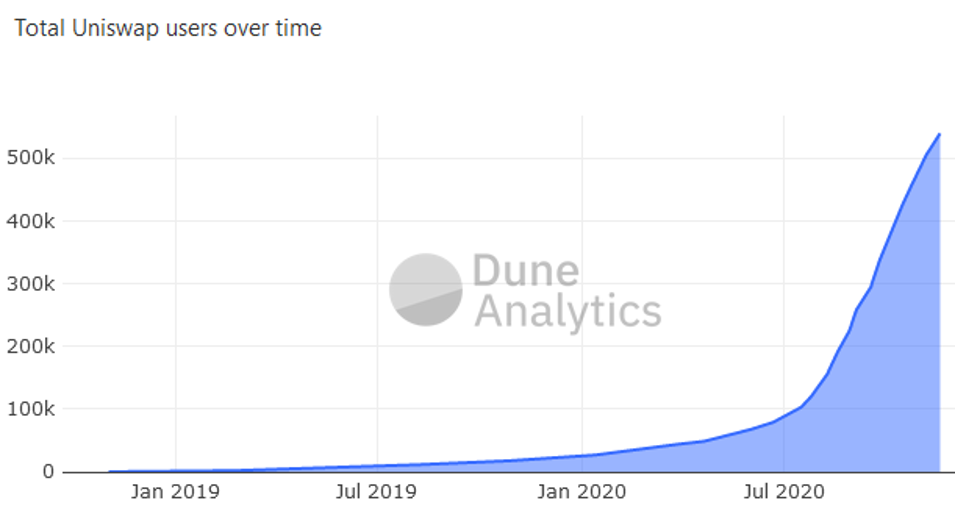 For a recent example, I recently bought a large position in Uniswap. I saw the user growth in the chart above (Principle 1). I used the product myself and thought it was not only easy to use, but incredibly useful (Principle 2). When they launched a new governance token, I got in early – at $5.50 per UNI.

A few days later, UNI was trading about $2.00. In just a few days, I lost more than half my investment.

In retrospect, this was like buying a traditional IPO on the day it launches. It may have been better to wait to see where the price landed before investing. It has not dampened my enthusiasm for Uniswap (and the price is already above $4.00 as I write this), but it shows the importance of price.

Price is relative. Just as we might value home prices by comparing similar homes in the same neighborhood, we can value similar blockchain projects to get baseline metrics, like price per user. For blockchain platforms and protocols, we can add in metrics like app growth, or price per power user.

But as the legendary investor Ben Graham taught Warren Buffett: “Price is what you pay; value is what you get.” So sometimes we have to look across categories of blockchain investment and compare apples to oranges.

Imagine you’re at the grocery store. Per pound, the apples are cheaper than the oranges, but what’s the value of the apples relative to the oranges? Will the apples keep longer? Do you enjoy oranges more? Are you hankering for an apple pie, or do you have scurvy?

When we compare the market cap of bitcoin ($339 billion) with Ethereum ($57 billion), does that mean bitcoin is overvalued, Ethereum is undervalued, neither, or both? What is the value – especially the future value – relative to the price?

In my view, Dalio is right: nobody really buys anything with bitcoin. The price is too volatile. Banks are afraid of it. But it does serve as a powerful on-ramp to the block market. Bitcoin is the gateway drug, and that has incredible value.

Ethereum has become the de facto platform for blockchain development, and history teaches us that technology platforms usually consolidate into one or two big winners: Apple and Windows, iPhone and Android, Google and Bing. Currently Ethereum is #1, with lots of platforms trying to be #2. That makes a long-term investment in ETH a pretty good bet. 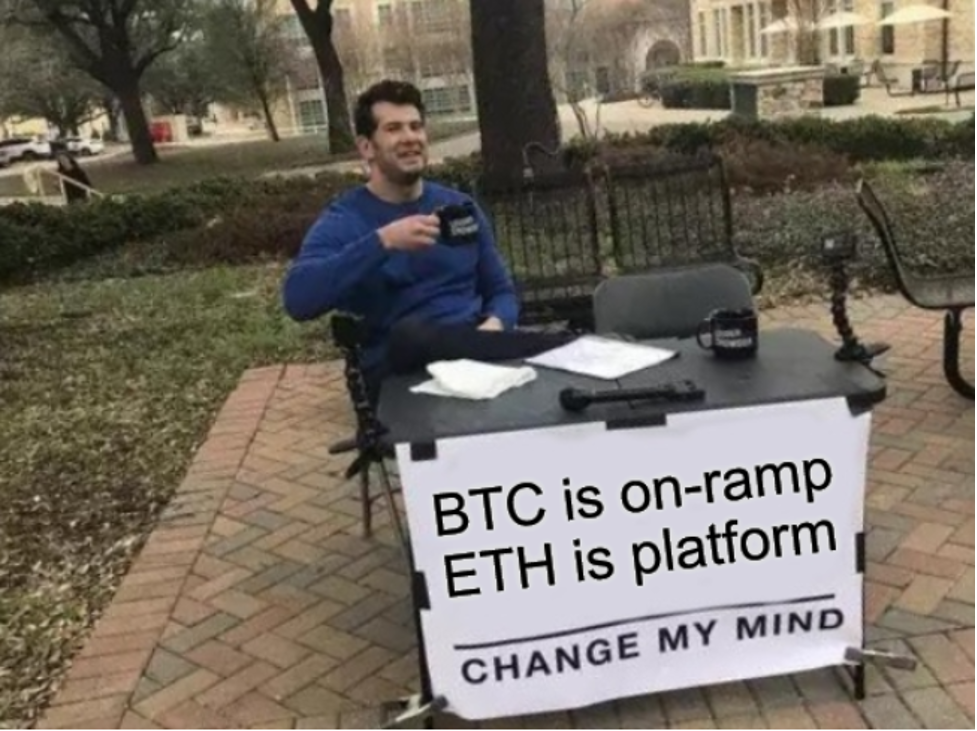 Now, let’s put these principles into practice with BTC and ETH.

In broad strokes, those are our principles in action. But we’re always looking to get better. This space moves quickly, so we try to keep a beginner’s mindset and remain lifelong learners. In the spirit of “finding the truth together,” I invite your feedback.

Like Dalio, I invite you to change my mind.