As I’m sure you’ve already surmised, the crypto community has been elated by your recent tweets and wonderful questions.

You should know that these exact questions have been asked by many of us at some point.

This journey to understanding blockchain and the exciting new world of programmable money is commonly referred to in the industry as “the rabbit hole,” and we’d like to welcome you warmly to it. We’ve been expecting you for quite some time.

On a personal note, your explanations of the economy have been very helpful to me in my career, and I’m honored for the opportunity to return the favor. Enough with the niceties, now for the questions…

In this case, I’d like to exercise the stated right to correct you. Nobody cares about the volatility. Especially in the short term, it’s inconsequential.

When AT&T announced that they would allow clients to pay their bills in bitcoin, they used a service that immediately exchanges the bitcoin for USD so that the corporation would not hold any exposure.

If anything, the transaction time may be a deterrent, especially in physical transactions where you just want to pay and go.

Even though the first confirmation is quite quick, the final confirmation of a bitcoin transaction can take up to an hour, sometimes longer when the network is congested. So, it’s not ideal for buying coffee.

Nonetheless, it is preferred by a growing number of people around the world, particularly on the internet across borders and in situations when there’s any lack of trust between the two parties, as all transaction are irreversible.

Many of the people I work with, including the majority of my partners, prefer to work directly with bitcoin over any other payment channel. But they won’t get mine.

See, the main reason it’s not a great medium of exchange is that nobody wants to part with it, especially in a bull market like we’re in now.

Yeah, it’s cute that a company allows you to pay with bitcoin, but who would waste something so precious on something as mundane as a phone bill?

The power of purchase

Your second question seems to be missing a question mark, and I think I understand why. It’s not really a question.

It’s actually a matter of perspective. In many ways, you have it good with the USD. It is designed to go down in value over time, but it’s not falling quite as fast as the currencies of Turkey, Argentina, Venezuela, South Africa, Sudan, or Lebanon. The outlook on bitcoin and rates of adoption in those countries of course is a lot more bullish than in the developed world.

Of course, we’re talking about the most severe cases in order to prove a point. At the end of the day, it’s a tool. How you view it or use it is up to you.

As an investor, the main attraction is the same aspect you mentioned, that it bears little correlation, and as such can be used an extremely effective hedging tool, as Fidelity Digital Assets has found in this report.

For your third question, about governments banning it, we won’t post the tweet because it can be summed up in two words, “regulatory risk.” At least, that’s how investors see it.

As a nascent technology, bitcoin has a much higher dose of it. Unfortunately, this is not something that can be explained on one foot, but there are several good books on the subject. The short answer is, they can’t.

The Blockchain was invented specifically to be impervious to all kinds of attacks, particularly from governments and large corporations, and bitcoin’s blockchain is highly regarded in the technical world as the most secure computerized network on the planet by a wide margin. Mati Greenspan Click to tweet

Even a consortium of the world’s largest countries would find it very difficult to break the blockchain, and even then, any potential effects would be temporary.

This is where the rabbit hole gets quite deep, so we’ll leave that for your further exploration.

However, I would like to add that even though Bitcoin is designed as an alternative to fiat currencies, it works better as a compliment than as a replacement.

Yes, this is a particular favorite of our team, and we frequently write articles and papers about the similarities and differences between physical gold and digital gold (bitcoin). But your question here is specifically deeper and more focused. … 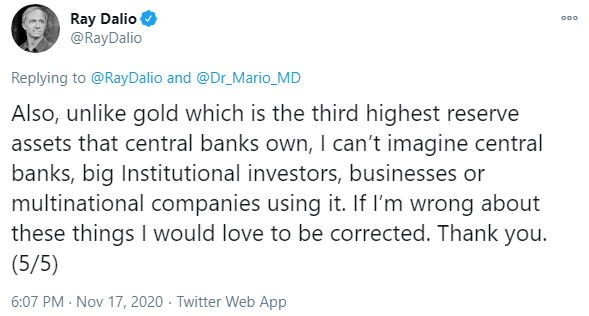 Again here, we’d like to humbly correct you. Bitcoin is only 10 years old, and the adoption by larger participants only just starting to happen now.

Facebook’s Libra was of course a catalyst for much of it, but the ripple effect is now being felt in the corporate world.

In the last two months alone, we’ve seen a lot of it. Visa, Mastercard, and PayPal have all recently announced that they’re working on their own bitcoin-related services.

Microstrategy and Square are the first corporate entities to start treating bitcoin as a reserve on their respective balance sheets.

As far as countries and central banks, we believe firmly that it’s only a matter of time…but I guess we’ll have to wait and see.