Everyone loves a large caucus. Especially when it’s in a state that swings. Tonight, it’s going down in Iowa and turnout is expected to be massive.

Yup, that’s right. It’s finally time to start paying attention to the US elections that will take place in November. Up to now, it’s kind of been on the side because a) Trump is most likely to win anyway, and b) refer back to a.

The markets love Trump because he gives them what they want. Huge tax cuts, lower interest rates, deregulation, etc… However, there is a chance that a Democrat will win and in order to accurately price in that risk, it’s helpful to know who that Dem will be.

Unfortunately, it seems like Andrew Yang isn’t going to make it this time. Yang is certainly a favorite of the crypto community as he’s the most vocally pro-active Presidential candidate in history. He was a long shot though and now it seems to be down to four.

We can probably expect early results around 9:00 PM, Eastern Standard Time. The favorite, as it seems to me, is Bernie Sanders, who was shot down in Iowa last year by the older crowd. Four years later, a lot of the younger crowd has grown up and are once again feeling the Burn. 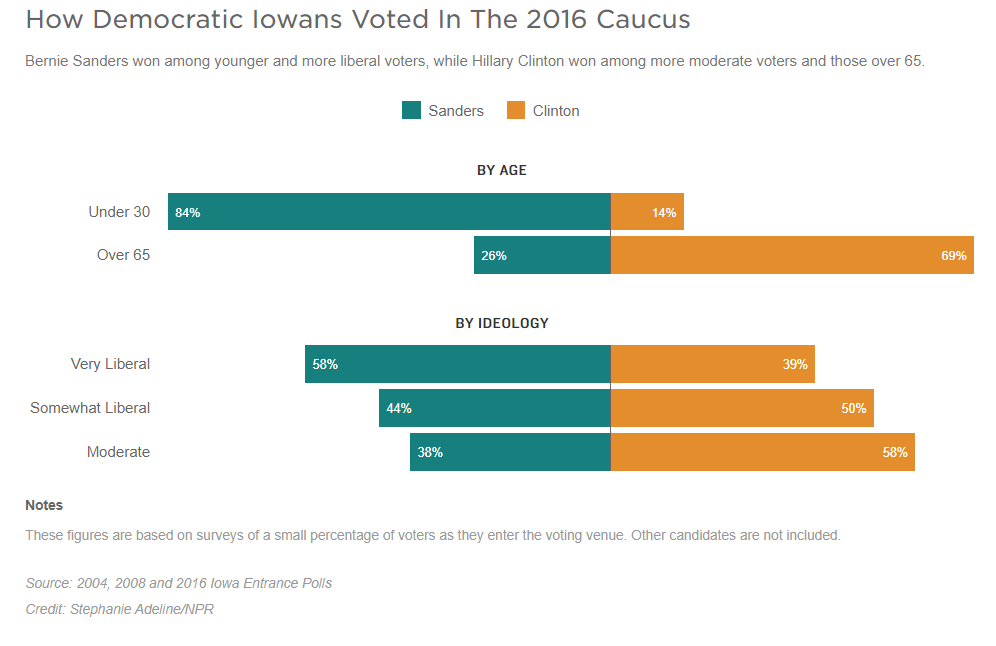 Of course, Sanders and Warren are the market’s least favorite so a victory for either could possibly have a negative impact on the market. Especially with all the Coronavirus fear, explored below.

Whoever wins tonight is not necessarily guaranteed the Democratic nomination but it will give them a big advantage. There are many other caucuses left on the trail and each candidate will be looking to take as many as they can.

January was a really great month for the markets. Or, at least it would have been, if it weren’t for that pesky disease.

The good news is that both the virus and the market reaction to it seems to be mostly contained within China. John Hopkins’ Coronavirus tracker is showing a total of 17,300 confirmed cases on the mainland and just 183 in other places.

Stocks on Wall Street sold off about 2% on Friday, but the opening of Chinese markets after the extended New Year’s break last night was downright ugly. About 90% of nearly 4000 stocks traded in Shanghai and Shenzhen dropped by about 10%. Not that they wouldn’t have gone down further, it’s just that the circuit breakers kick in at 10% as a fail safe to ensure that things don’t go down too much.

The People’s Bank of China has done their best to stymie the selloff and in total have injected about $174 billion into the market to prop up prices but it doesn’t seem to be having much affect at this point. It could be a few days until the current situation is fully priced in but a few weeks before we really understand how bad the virus might be.

Therefore, the full impact on the economy and on corporate profits cannot be known at this time. Speculators outside the mainland seem to be content erasing January’s gains. Closer to ground zero however, the fear is much stronger.

In the words of FDR, “we have nothing to fear but fear itself” and that really applies here. It’s well known that markets are overleveraged, yet over the last few months investors have been content to continue to put money in. Now that there is some rational fear, the question investors will no doubt ask themselves is if their neighbors will give in to that fear and if the answer is yes, perhaps it’s better to front-run them and sell mine first.

Once thing’s for sure though, once we do find a bottom, there should be some really good opportunities to buy in but where that bottom might be it’s probably way too soon to say.

This chart shows the opening gap (purple) in the Shanghai Composite Index. The orange line is the US stock market as a comparison. 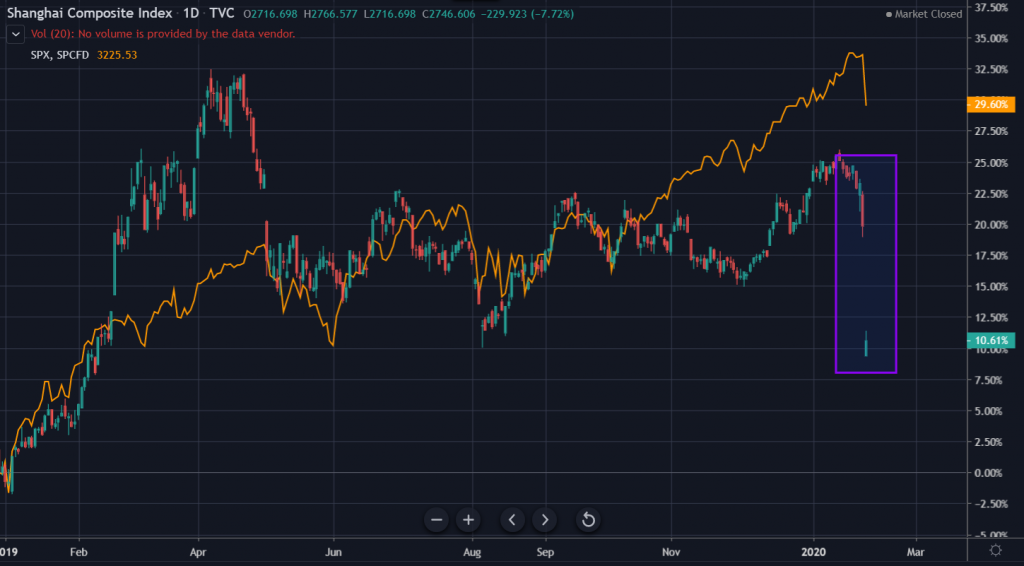 With that however, it’s interesting to note that both gold and the Japanese Yen, two common safe-haven assets, are trading lower today. The US Stock market also just opened higher. So there doesn’t seem to be any real panic at this time.

No Fear for Crypto

Whatever’s happening in the stocks doesn’t seem to be having any affect on the cryptomarket whatsoever. Crypto is neither acting like a safe haven in the face of the virus, nor is it selling off with the other risk assets. Rather, it remains completely uncorrelated. Go figure.

One of the main advantages of the crypto asset class, when it comes to a portfolio manager’s perspective, is the fact that it it is less exposed to whatever’s happening in the news and is largely unaffected by external factors. That’s what makes it a great hedging tool.

As far as crypto is concerned, what’s happening at the moment is consolidation. The market is giving a very healthy test of the new price levels to see if they are sustainable. The longer we stay at these levels, and trade above the 200DMA and above relevant support levels, the less people will fear that the recent gains might be erased by a Bart.