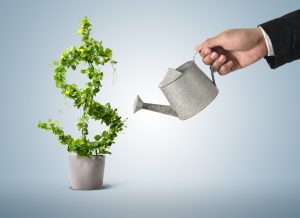 New finance is the category covering digital currencies, token markets, and blockchain-enabled assets. The easiest way to think about “new finance” vs. “old finance” is like the difference between “new media” vs. “old media.”

In 1995, when the Web first began to take over the world, I was working for a technology publisher called Ziff-Davis. They were what we’d now call “old media,” publishing something called “magazines,” which were these stacks of colored paper with words printed on them.

I was lucky, because Ziff-Davis published computer magazines like PC Magazine and Computer Shopper, so when the Internet revolution hit, they were one of the first to make the leap from “old media” to “new media.” But the transition was painful.

I remember one pitch meeting, where a group of us young whippersnappers were pitching all these radical “new media” ideas on how the internet could be used, and the “old media” editors were staring at us as if we were insane. To them, the internet was still a novelty.

To its credit, Ziff-Davis quickly jumped on the bandwagon, creating ZDNet (which still exists today), and a number of other successful web properties. But the company was eclipsed by faster, nimbler competitors like Cnet, which eventually acquired all of Ziff Davis’s web properties.

One of the great benefits of living through the initial dot-com boom was the perspective that it provided, because now it’s happening again in the world of finance.

The internet didn’t just create a new distribution method for traditional print publishing businesses; it destroyed them entirely. Over a dozen Ziff-Davis publications were consumed by the Internet. Who buys printed computer magazines anymore – or for that matter, newspapers, phone directories, or pornography? The Internet ate print.

At the same time, new media created countless new opportunities: think of content empires like Huffington Post, Buzzfeed, and Business Insider. Some companies have been able to rebuild themselves around the “new rules,” like The New York Times, The Washington Post, and Fortune.

The typhoon of change that is roaring toward the traditional investment bankers and VC firms should terrify them. Instead of eating snow crab on their private jets, they should be studying cryptography and joining blockchain Meetup groups.

The havoc that bitcoin, tokens, and ICOs are wreaking upon the traditional flow of money are enormous, and they are only beginning. (If you have no idea what I am talking about, I highly recommend Patrick O’Shaughnessy’s three-part Hash Power documentary, which is well worth the investment of your time and attention.)

Idealists said the Web would completely democratize information, which it did – to a point. Anyone can publish anything they want, cheaply and easily. But the lion’s share of attention still consolidated into a few large media companies – the players changed, but the game stayed the same.

In the meantime, it will be relatively easy for new players to disrupt and transform existing financial models, especially where those models provide little value or are highly inefficient (credit card merchant fees, remittance payments, venture capital distribution, etc.)

“History does not repeat itself,” Mark Twain may have said, “but it often rhymes.” Some of the guards of Old Finance will reinvent themselves, a few will deny the coming flood, and many will simply be unable to adapt. Sometimes you can’t teach an Old Finance new tricks.

How to Make the Transition

The executives that successfully made the leap from Old Media to New Media did a few things right, and those same lessons apply here.

Get your hands dirty. The executives who actually used the internet – not reluctantly, or just for an hour or two, but willingly and passionately – were the ones who really “got it.” Those of us who actually created websites quickly became experts in the dark arts.

Today, the best way to get into bitcoin is to buy bitcoin. The simple experience of buying it teaches you more than hours of reading about it. Also, once you buy it, you have skin in the game. You’re rooting for it – and for the entire world of New Finance – to succeed.

Be curious. When making the transition to New Media, I saw the most successful executives dig deep into their personal areas of interest. One brilliant analyst found the internet was a goldmine of interesting and valuable data, and he became like a child swimming in a vat of molten chocolate.

It’s hard to force curiosity, but the world of New Finance is so enormous and interesting that once you start digging, there’s bound to be something that catches your interest. Pull on the thread and see where it leads you.

Stay humble. I worked with a VP who was leading early online chats where half a dozen people showed up. This was a guy who commanded large teams of real-world employees, and he’s hanging out with a few geeks in a chat room. That’s humbling.

It’s also humbling to mix it up with the wide assortment of freaks and geeks who make up the world of New Finance: neckbearded cryptographers, hyperactive day traders, unsophisticated investors, and a wide assortment of curious onlookers. You won’t see a lot of Armani at a bitcoin meetup.

Still, these are the men and women and man-children creating the world of New Finance. If you want to understand what the hell is going on, so you can surf the wave instead of being crushed by it, make yourself a student.

Everything old is new again. If you’re in the world of Old Finance, make the leap. We’ll hold your hand.