What are tokenomics? Tokenomics are the economics of tokens: specifically, how many there are, how many can be created, and how they’re created (or destroyed). Before investing in any digital asset – from bitcoin to cryptocurrencies – understand the tokenomics.

Dogecoin, the cryptocurrency based on a meme, has been on such a price run that everyone’s asking, Will DOGE actually hit $1.00? How about $10? $100?

To answer these questions, let’s look at tokenomics, defined as the economics of tokens: how many there are, how many can be created, and how they’re created (or destroyed).

A lot of new blockchain investors think like this: Dogecoin has already shot up to 62 cents, and the price of bitcoin is $57,000. Look how much room it has to grow!

The problem with this thinking is that Bitcoin and Dogecoin are two different things. Why? Because tokenomics.

Imagine that bitcoin is gold and Dogecoin is plastic. There’s a limited supply of gold, so people consider it pretty valuable. Plastic, on the other hand, is cheap and easy to produce. The economics are different.

Think of bitcoin like gold (so rare it doesn’t even show up), and Dogecoin like plastic (more than we could ever want or need).

This means if Dogecoin hits $1.00, it would have a market capitalization (or total value) of about $129 billion, making the third-largest cryptocurrency in the world. This is hard to believe, though to be fair it’s already hard to believe that a currency started as a joke is currently worth $80 billion.

So, what could Dogecoin (or any other crypto) be worth? A great tool for this is The Coin Perspective, which helps you, well, put coins in perspective. I’ll chart some of the numbers:

Do you really think Dogecoin can be more valuable than Ethereum? How about Bitcoin? How about the US economy? Global economy?

This is helpful for understanding the upper bounds of where tokens can go. If you are expecting Dogecoin to go to $100, that gives it a market cap of $13 trillion. To compare, the entire M2 money supply of the United States is about $20 trillion. So that’s probably not going to happen.

Before investing, understand the tokenomics by asking these three questions:

Let’s take these one at a time.

Tokenomics Question #1: How Many Tokens Are There?

With bitcoin, it’s pretty straightforward: only 21 million will ever be mined, and the last bitcoin won’t be mined until 2140, long after you and I are gone. Today, about 18.7 million have been mined, and it’s really hard to mine new ones. (Like gold.)

It’s this scarcity, which was built into the original code, that many argue makes bitcoin so valuable. It’s like my mother-in-law says about investing in real estate: “They’re not making any more of it.”

All cryptocurrencies work differently. With Doge, for example, about 10,000 are mined every minute. (Let that sink in.) 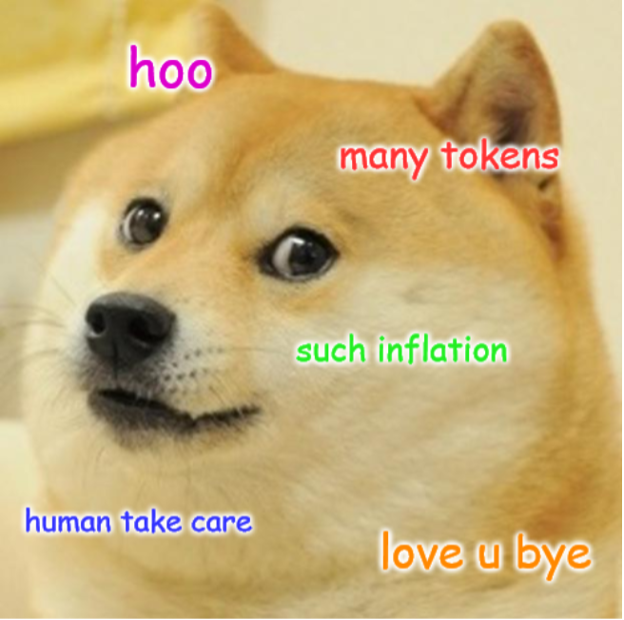 Because this space is so new, there’s no “industry standard” for token creation. There’s no right way to do it. This means every cryptocurrency has a different number of tokens, which is why “Market Cap” (total tokens * price per token) is so useful for comparing apples to apples.

This isn’t just a problem in the cryptocurrency world. A lot of beginning investors look for “penny stocks,” thinking, Sure, this is a crappy company, but if that penny doubles in value, I’ve doubled my money!

You can’t invest in anything on the price alone. Would you buy anything – a house, a car, a vacuum cleaner — just because it had a low price? That vacuum cleaner would suck, and not in the good way.

Takeaway: Look at the total market cap, and use The Coin Perspective to see how realistically high your token could go.

Tokenomics Question #2: How Many Tokens Can Be Created?

In other words, DOGE GO BRRRR.

If you think the government prints a lot of money, Dogecoin is literally deflating every minute. Here’s the way I explain it in my crypto investing book: imagine the total amount of Dogecoin is a pie, and you own 10% of that pie. 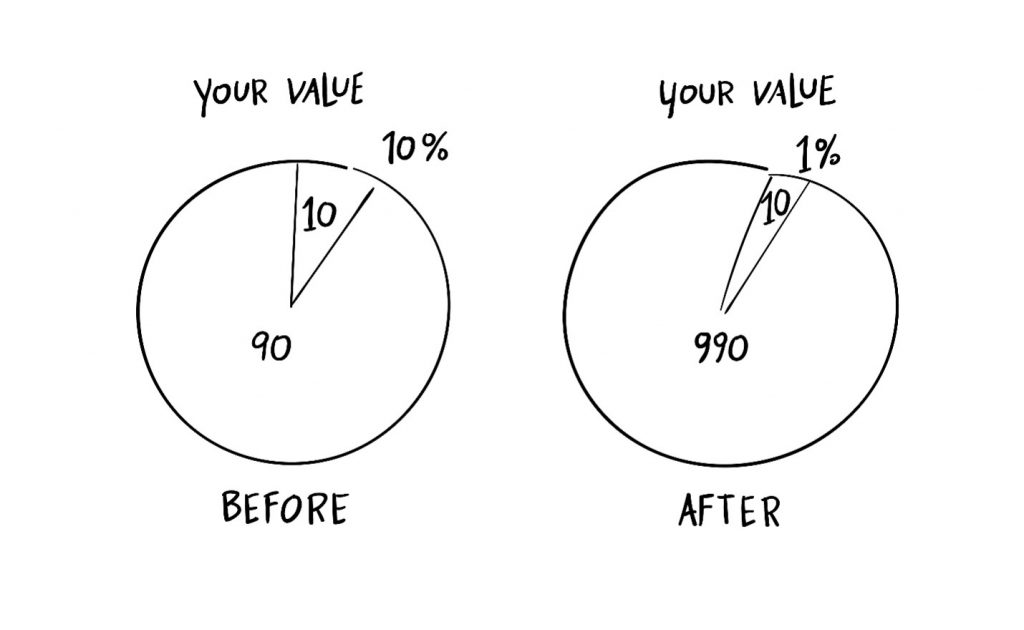 Now imagine that a few years later, the number of DOGE coins have increased 10x. The pie has gotten bigger, but your amount has stayed the same, meaning you have proportionally less wealth.

This is what happens in the actual economy right now (we call it “inflation”). You have a certain amount of wealth, and as the government creates new money, your wealth is worth less every year. This is why just keeping all your money in cash is a losing long-term strategy: the overall pie keeps getting bigger.

It’s also why the cost of an actual pie might have been $0.10 in your grandparents’ day, and it’s $10 today. The overall money pie is getting bigger, even if the size of the store-bought pie is staying the same.

Especially as governments have printed money to get us through the pandemic, everyday items are growing more expensive. Money isn’t free: you have to pay for it.

Bitcoin gives investors some degree of comfort, because its supply is limited by design. In this respect, it’s more like gold, which is increasingly hard to mine. But every cryptocurrency is different, so be sure to do your homework on how big the pie will grow, how fast.

Takeaway: Consider the total number of tokens that can be created, to see how much inflation will eat into your investment.

Tokenomics Question #3: How Are New Tokens Created (And Destroyed)?

To understand how new tokens are minted or burned, you really have to do your homework. There are as many different methods as there are cryptocurrencies, and you want some degree of comfort with the rules of the game.

Again, bitcoin is the gold standard (so to speak): it’s clear how new bitcoin are mined, and there’s a rigorous network of miners around the world making it happen. They can’t be destroyed. (Bitcoin can be taken out of circulation, but not destroyed.)

With other blockchains, the rules may be completely different.

None of these things are necessarily wrong. In fact, all these experiments in tokenomics are what makes this industry so interesting. It’s thousands of little currency ecosystems, all trying different experiments.

There is one type of tokenomics, however, you should avoid:

This will probably not be clear up front, since no founders want to admit they can devalue your investment whenever they feel like it. Again, this is what governments have been doing in full force: our stimulus checks are basically new tokens (in the form of US dollars) created out of thin air.

Takeway: As a long-term investor, you probably don’t want to be gambling your hard-earned money on unproven tokenomics. This is why it’s generally better to avoid new, unproven blockchains. Stick with what works. 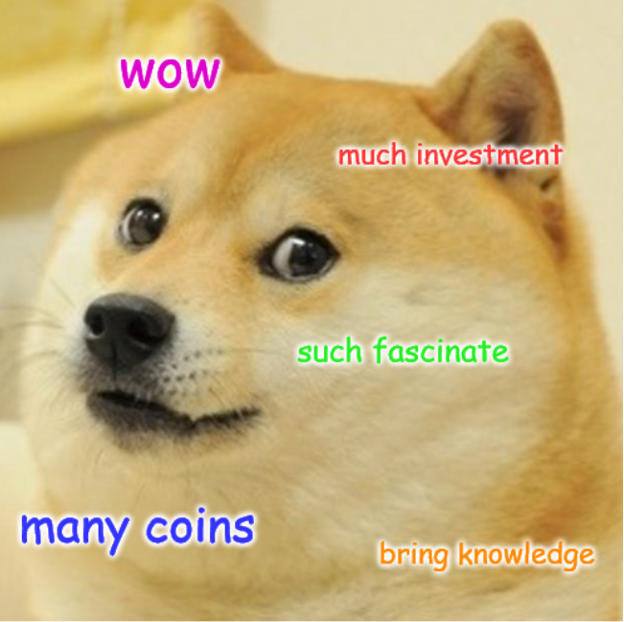 TL;DR: It’s Not Just About Price

I had a new investor ask me recently, “Bitcoin is so expensive, I can’t afford it. Why don’t I just pick up a bunch of these smaller coins instead?”

The easy answer: you’d rather have a little bit of something that’s growing in value (gold, tech stocks, bitcoin), instead of owning a lot of something with little value (plastic, penny stocks, Dogecoin).

In the blockchain world, it’s really easy to create new tokens out of thin air — even easier than it is for the government to print money out of thin air. This means blockchain investors have to know what they’re buying.

So, will DOGE hit a dollar?

What are you buying? You’re buying a joke currency that depreciates in value (10,000 new DOGE minted every minute). It already has a higher market cap than Polkadot, Cardano, and Algorand, which are actual blockchain platforms where people build things. If it gets to $1.00, it will surpass Binance Coin, which powers the largest crypto exchange in the world.

To me, it’s clear that Dogecoin is a bubble, fueled by the same kind of meme mania that has driven up GameStop stock. It’s not really an investment, it’s a gamble, and I hate gambling. So I wouldn’t touch Dogecoin with a ten-foot leash, simply because of the tokenomics.

Tokenomics are so important that we’ve given them a whole section in our Blockchain Investor Scorecard. As an investor, research how many tokens there are, how many can be created, and how they are created (or destroyed).

Asking these three questions is like a superpower that can instantly give you an idea of how high a token can realistically go, as well as the value of that price over time.

I am indebted to Reddit user lunargrover for their original post on today’s topic, which I heartily recommend.