First off, I wanted to start out with our first ever BMJ retraction. On Friday we wrote about FC Barcelona’s new digital tokens. It seems the CEO of Chiliz, who is producing the tokens, is a reader of ours and we had a great chat over the weekend. Our mistake was in saying that the tokens would only be available through the app. In reality the coins will be released as an IEO and will very quickly move to a free market system with a floating exchange rate and self-custody model. Was even more interesting to hear where Alex sees the space going in the next few years. No spoilers though. Very exciting stuff!!

Moving right along, some not so exciting stuff…

Today’s daily doom and gloom forecast for the global economy comes from none other than the Chief Investment Officer of the Guggenheim Institute. Certainly a qualified authority to speak on such matters, no doubt.

In a particularly strong worded blog post that hit the Internet waves over the weekend, Scott Minerd accuses the global financial markets of mass cognitive dissonance. In short, the stocks and bonds are priced to perfection despite some glaringly obvious risks. As Scott puts it…

“The giant flood of liquidity is driven by virtually every central bank in the world injecting reserves into the system.”

He goes on to say how investors have stopped doing their homework to figure out how much an asset should be worth and instead are just piling money into the indexes. He also names the Coronavirus as a possible black swan event and even if we could trust the numbers out of China, the way the mortality rate is being canceled is just wrong. It’s not 2-3% but more like 18%!!

In short, a lot of food for thought in this unique blog post.

The spot of light of course comes in the very last sentence where he admits that he could be wrong about it all and we could be headed into a new paradigm, and there are certainly no shortage of Suits on Wall Street ready to jump on that narrative, but it is with the same anthem that every crisis happens throughout history.

So Is the Crash Coming?

In any case, the markets can remain irrational a lot longer than you can stay solvent. As long as the Fed continues to pump money into the economy, markets can remain elevated. However, should goods start to become scarce due to the main production country going offline, people will likely be willing to pay more money for less stuff, supermarkets will start raising prices on items, and before you know it…. inflation.

The Fed would then be forced to raise interest rates very quickly. Much quicker than the market can digest and then… foreclosures. Any person or corporation who gets by on thin margins would quickly file for bankruptcy.

However, if we do somehow make it out of the Coronavirus threat, this whole dynamic could take a lot longer to play out. Still, at this point in the cycle it’s certainly prudent to take Minerd’s advice and invest in the “highest quality securities.”

My own “non-financial advice” suggestion for you is to think about hard assets, that have a strictly limited supply in addition to high-quality securities. Gold, property, art, and bitcoin come to mind. Obviously we hope that none of the above ever happens. I would much rather turn out to be a bad analyst than to see this scenario unfold.

After all, the Chinese CSI 300 index has already fully recovered from the Lunar New Year gap. It’s good to see that at least something is healthy over there at the moment. Or not. 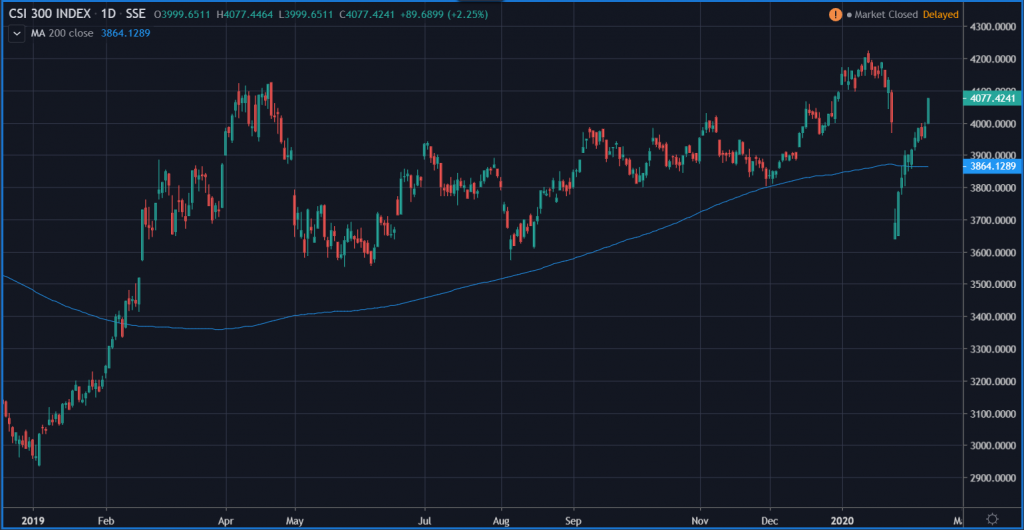 Today is President’s Day in the United States, so markets will be closed. On Wednesday we’ll get the FOMC  minutes from their last meeting that was held on January 30th. I wonder if they were thinking about any of this at that time.

How Does all this Affect Crypto

It doesn’t. Not yet anyway. As far as I see, Coronavirus has yet to have any impact on bitcoin’s price whatsoever. The few speculators who might be buying on the narrative that BTC somehow is a safety play in the face of a global pandemic are probably not powerful enough to move the market.

The idea portrayed that infected cash promotes the use case for digital assets is even more preposterous. After all, China is already a predominantly cashless society and almost all transactions done in urban regions are mobile anyway.

The one thing on the fundamental side that would seem to be influencing crypto prices today would be the looming threat that FinCEN and the US regulators will soon come out with some new scary regulations to oversee the crypto market. However, the statement from the Treasury Secretary Mnuchin that they’re looking to cultivate innovation but prevent money laundering, and I’m paraphrasing here, came out last Wednesday.

Therefore, I find it a bit funny that many are claiming that this is the reason for prices dropping today. Yes, I know it does take some time for new to proliferate, but it just seems like another case of analysts trying hard to fit a specific narrative to a specific price movement. I guess we’ll have to wait and see to be sure.

Yet, whatever the reason, prices are dropping. My feeling is that this is still within the boundaries of a normal correction after the huge rally that we’ve seen this year. In fact, if we take a look at the upward channel we’ve been tracking, we’re just at the bottom of it now. Or, just below it anyway. 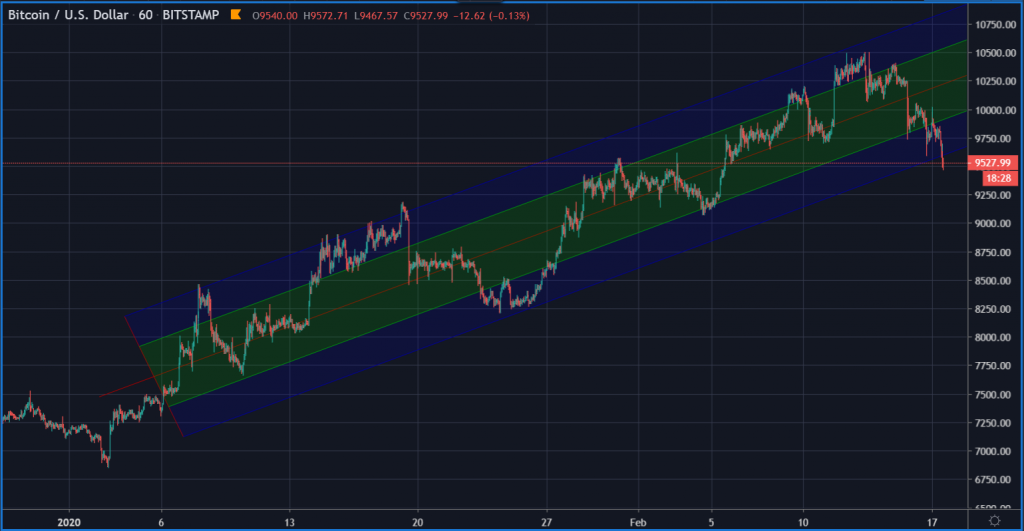 Well, if you’ve been hodling, I see no reason to change strategy now. Mati Greenspan Click to tweet

The most consistent gains that I’ve ever seen traders make was always on long term holds. Changing strategies is always risky.

For those of you dollar cost averaging or playing a buy the dips strategy, now could certainly be a good time to add to your positions. After all, it’s certainly cheaper than it was last week.

Day traders really face a moment of truth though. Does the breakout below the channel mean further downside? Or is now actually the perfect time to enter a buy position at the bottom of the channel?

I’ll leave that with you. Have an awesome day ahead!!