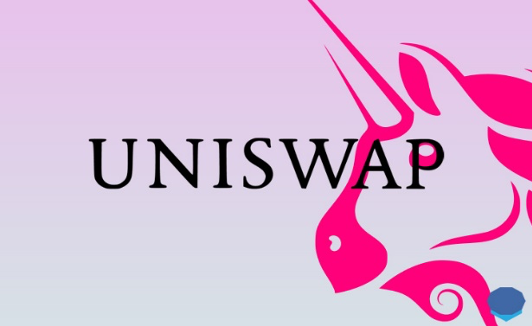 In 2017, Hayden Adams was a young mechanical engineer working at Siemens. It was his first big job out of college, and he was crushed when he found out he would be getting laid off. He commiserated with his friend Karl, who was working at the Ethereum Foundation.

“Congratulations,” Karl said, “this is the best thing that could have happened to you! Mechanical Engineering is a dying field. Ethereum is the future and you’re still early. Your new destiny is to write smart contracts!”

Hayden had experience programming macros, and was familiar with Ethereum, but had no experience as a real developer. “Don’t I need to know how to code?” he asked.

“Not really,” Karl responded, “coding is easy. Nobody understands how to write smart contracts yet anyway.”

“Catching me at a low point,” Hayden reflected later, “Karl convinced me to accept Ethereum into my life.”

This was summer 2017, just as the Great Crypto Boom was underway. Hayden spent the next several months teaching himself Solidity and JavaScript, then looked for a real project to test his skills. Inspired by a post from Ethereum founder Vitalik Buterin on automated market makers, he decided to build a service called Uniswap.

Three years later, that humble programming project is well on its way to becoming the next crypto unicorn.

From a user point of view, that’s it. If you own USDC, you send it to Uniswap and get BAT. Send it again and get MKR, or SAI, or hundreds of other tokens.

Let’s imagine you’re vacationing in a country where the currency is worthless (we’ll call it Poonesia). When you land at the airport, you have to exchange your money for Poonesian dollars, so you can enjoy your delightful Poonesian holiday. When it’s time to leave, you return to the currency exchange desk and convert any leftover Poobucks back into your money.

The same problem applies to digital assets (i.e., cryptocurrencies or tokens). Let’s say you bought some small-time Ethereum token – we’ll call it Poocoin – that looked like a great investment back in 2017, but now you’ve changed your mind. Normally you’d have to find someone to buy Poocoin and pay you Ethereum, usually at inflated rates, and only on special exchanges that allow you to trade Poocoin.

From a user point of view, though, it’s just a “swap.”

This is why we call them currency exchange desks, because the user experience is that you’re just exchanging (or swapping) one currency for another, though what’s happening in the background is more complicated.

Uniswap is called an Automated Market Maker, or AMM. To describe it in detail would require too much digression, but the quick version is it lets users easily swap one Ethereum-based token for another.

When I say “easily,” I mean eeeeeasily. If you are holding your tokens in a browser-based wallet like MetaMask, for example, Uniswap just connects to your wallet with one click and lets you swap.

No username. No password. No uploading your driver’s license and passport photos, then two weeks later getting an automated support message asking you to please also send a DNA sample. It is instant, painless, and friction-free.

You’ll pay the Ethereum fees, of course. And there’s no telling whether you’re getting a good deal on the exchange rate. But it’s so easy and so cute (hey, it’s unicorns) that you’ll pay it.

This is why the number of Uniswap users follows the famous “hockey stick” growth curve that every investor wants to see: 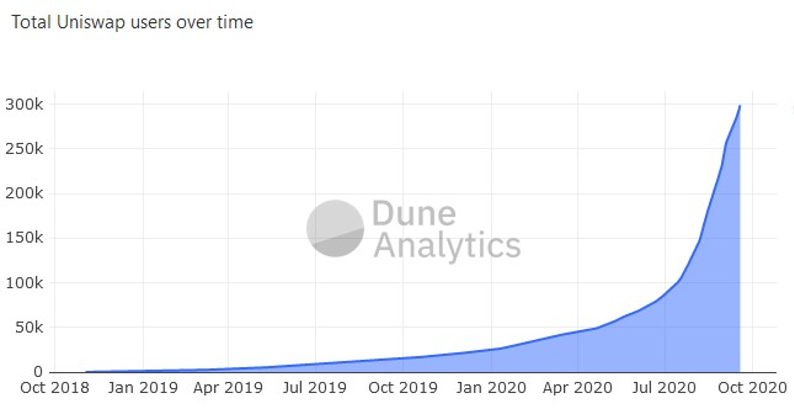 This is the Holy Grail of blockchain projects: real users.

But wait, there’s more: the Uniswap protocol is decentralized, which is easy to say but tricky to understand. Another example will help.

Let’s say that the currency exchange kiosk at the airport is no longer run by a single company. Instead, it’s a friendly robot that someone built and left out in the middle of the airport. Now when you land in Poonesia, you go to the friendly robot, who exchanges your money for Poonesian dollars.

Who owns the robot? you ask. Technically, no one owns the robot. The robot is a kind of “protocol,” or universal translator for money.

So is Uniswap a centralized company or a decentralized protocol? you ask, and here we get into the confusing part:

It’s all three. It’s a little like Ethereum, which is an organization, a technology, and a cryptocurrency. These three all get confused in the minds of investors, so they think they’re buying shares in a company. (It’s different but similar, as we’ll discuss below.)

Which brings us to how you invest in Uniswap, using their new token called UNI.

Let’s say you’re a fan of Elon Musk, and you buy a few shares of his auto company. That share of TSLA makes you a part-owner of the company, which now gives you some rights: for example, you might be able to cast a shareholder vote to decide whether Teslas should be equipped with flux capacitors.

The new model for blockchain projects is called a governance token, and it works kind of the same way. By owning a governance token, the tokenholders (like shareholders) can propose and vote on changes to the underlying protocol. (Here’s what it looks like.)

To be clear, you’re not buying a share of a company. You have no legal rights, and there’s no protection if the company goes bust. We’re in this emerging industry where it’s still a wild frontier: you’re betting on the future value of Uniswap (the company, the app, and the protocol – all three).

No one will say this, but I’m saying it. Everyone calls it a “governance token,” to avoid making it sound like a stock offering. But the truth is, people invest in these DeFi tokens like investing in stocks. And in some ways, they are like stock investments:

Which is why Uniswap’s recent move is a stroke of genius.

Uniswap’s surprise announcement that it would be launching its own UNI token came with another unexpected surprise: the company would be rewarding 400 tokens to everyone who had used its platform.

It’s as if a pretzel company filed for an Initial Public Offering, then said, “Everyone who’s bought a box of our pretzels in the past is going to get free shares in the company.” It was radically generous and strategically brilliant: what Synthetix founder Kain Warwick called a “galaxy brain move.”

This is called an “airdrop,” where you are giving tokens away for free (much like the government “airdropping” stimulus checks to get us through the Coronavirus). Normally, airdrops are a bad idea because they cheapen the value of tokens (like we have cheapened the value of the U.S. Dollar).

Most airdrops are done out of desperation, trying to get people to buy and sell a blockchain token. Because Uniswap had actual users, they could send the tokens as a thank you reward to those early users. It was like getting free stock in the pretzel company.

If you didn’t love the pretzels before, you’ll be pretty happy when you’re getting pretzel shares – especially as the price of those shares goes up, which they’re likely to do, now that you’ve created massive online excitement around your pretzel stock.

Now for the pretzel de resistance: many users will just take their 400 free UNI tokens and immediately cash out. First they have to convert the UNI tokens into something else, and where will they do it? UNISWAP.

So the giveaway has a triple effect:

In Silicon Valley, a unicorn is defined as a billion-dollar company, and I expect to see the UNI token hit that valuation this year.

(Full disclosure: I was awarded 400 UNI in the airdrop, and quickly bought an additional 400. Don’t invest more than you are willing to lose, and please read the token distribution carefully before investing.)

Hayden Adams was in his early twenties when he was laid off from Siemens, with few prospects and no blockchain experience. It wasn’t an overnight success, and I recommend you read the full story of his struggles to build Uniswap. But he kept at it: building software, building a team, and building relationships.

It’s a powerful lesson for all those dealing with setbacks: not only can you rebuild your life, you can build something that takes the world by storm. And after the storm come rainbows … and unicorns.