A fine line exists between illicit and illegal, and it’s often the wrong people who get to decide. Mati Greenspan Click to tweet

According to last week’s circular from the People’s Bank of China, transacting in cryptocurrencies is now illegal.

Therefore, the famous statement that “only criminals use bitcoin” is now very true in China.

This is very similar to how in many countries, someone who smokes marijuana is considered a criminal, even if they have never done anything else wrong in their lives. As a famous podcaster once put it:

In Australia today, it is apparently illegal just to stand on the street. Here’s a video, one of too many that have crossed my feed lately, of a gang of cops taking down a man whose only crime seems to be talking to the police officers.

For some reason, we’ve come to expect China to trample basic human rights. It’s a bit more shocking to see it happening in other countries.

Decision time for the U.S.

Bitcoin is a true indicator of freedom. Blockstream chief strategy officer Samson Mow calls it “the ultimate litmus test” where we can easily see whether a politician or organization is fair or corrupt based on their stance on bitcoin.

For the U.S., which was founded on the principles of freedom and justice for all, you’d think the decision would be simple. Some of the nation’s politicians are clearly toeing that line and supporting financial freedom in the world’s greatest democracy.

However, many of the replies to the above tweet justly argued that not all U.S. politicians are on the same page here. Indeed, many of these government officials have sided with incumbent financial institutions where it comes to FinTech innovation.

In short, the debate rages on, and we can only hope that when the dust settles, freedom will ring, and hopefully before it’s too late.

Down on your trading?

Losing money in the markets lately?

The answer: get a hamster. 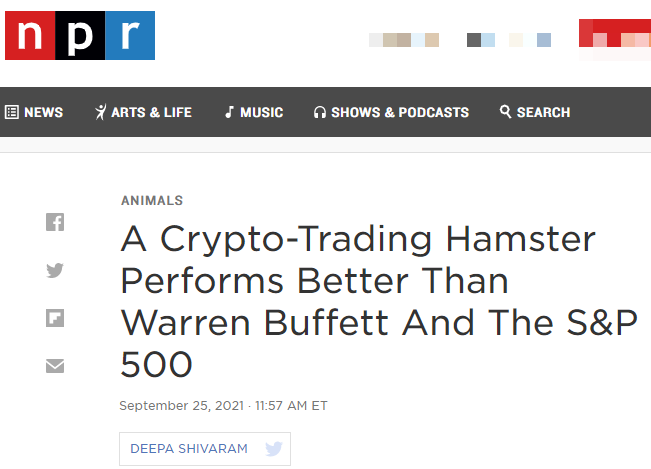 This headline is rather self-explanatory, and this is definitely alarming for those who make their money predicting the markets.

I guess it just goes to show how market outperformance can come from the strangest places. It will be interesting to see whether Mr. Goxx is able to keep up these gains in the long-term and stand the test of time.

That’s it for me.