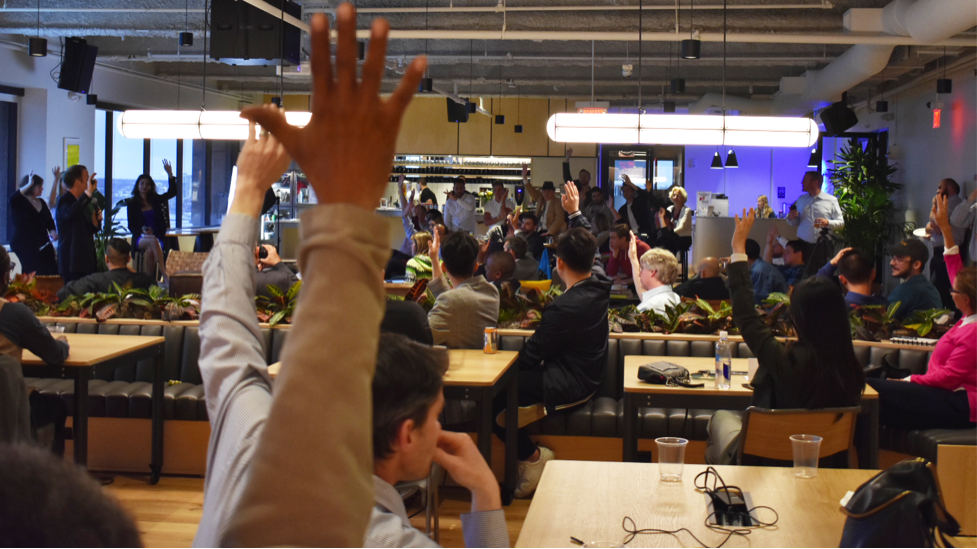 At a recent meeting of the Blockchain Investors Supergroup, we had a very special guest: Richard Kastelein—or as I call him, “The Man Who Launched 100 ICOs.”

As the publisher of Blockchain News, Richard was one of the first to learn about Initial Coin Offerings, and he quickly became a master of this new form of fundraising. As his knowledge and influence grew, he became one of the industry’s top thought leaders and advisors.

At our live event, Richard spoke about how the early days of ICOs were infused with idealism. With blockchain, we could democratize fundraising! Everyone could invest in blockchain projects that they cared about!In this spirit, many early ICOs were set up as nonprofit foundations for the public good.

Which brought us to the topic of security tokens.

Though security tokens are all the rage in the blockchain space, the idea is still being worked out. Here’s a first pass at how the two might be compared against each other: 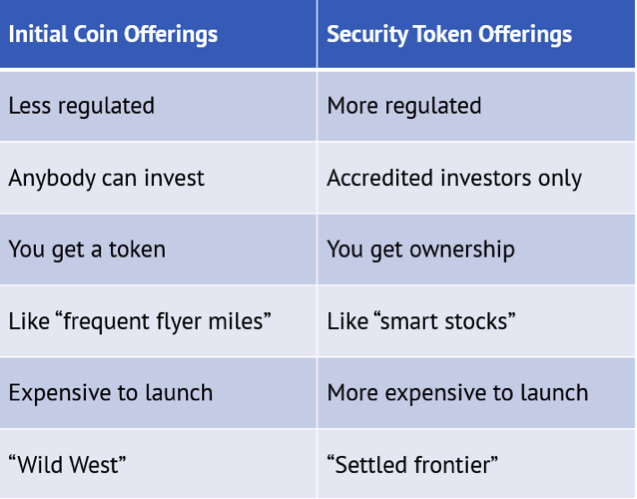 Security Token Offerings may replace Initial Coin Offerings, because as an investor, they letyou actually own something. Let’s unpack an example to see how it might play out.

The traditional tech fundraising model goes like this: an entrepreneur gets a little seed money from an angel investor, builds a prototype, then gets subsequent rounds of funding from VC firms, each time growing the company and the valuation, until finally she launches an Initial Public Offering.

The Initial Coin Offering process has evolved into a similar model: an early fundraising round, followed by ongoing “presale” funding rounds, with an eventual ICO. The difference is that while the IPO typically has a real company with real revenues, the ICO is typically still just an early-stage startup.

A Security Token Offering will still require a seed/angel round, because it’s expensive to get these things going. You have to develop a team, a prototype, a business plan. (And the lawyers. Lots and lots of lawyers.)

Let’s say you’re an entrepeneur with a great idea for a new blockchain project. You find an angel investor who’s willing to commit $50,000 to get you started, and you give up 5% of the company. (At $50K/5%, you now have a $1M company. Congratulations!)

With your $50K, you develop your blockchain prototype, get the pitch deck ready, and spend a ridiculous amount of time with your lawyer. Now you’re ready to do raise some real money. You create a pool of 100 blockchain tokens, and transfer 5 of these to your early investor (who owns 5%).

With this money, you open an office and do some hiring. You find a bunch of developers, a product person, a nacho bar. Let’s say your angel investor wants to sell his original 5 shares: he can do this at any time, with that transaction being recorded on the blockchain. (This is important.)

Now your company is cooking. You’ve got a product, you’re adding users. You have to expand the nacho bar. As you show traction, you can go after larger rounds of funding, building more valuation in exchange for selling more tokens.

Finally comes the public sale—or as we used to call it, the Initial Public Offering. Let’s say you’ve now got a $100M valuation, and you still own 40 of the original 100 tokens (40% of the company). You want to offer 20 of your remaining 40 tokens to the general public. And here’s where things get interesting.

What is the market price for your public offering? It is whatever your investors have been paying to buy and sell those tokens privately.

Remember, there is no “dark market” with this blockchain model. There are no back-office dealings. It’s all transparent. If your early investors are buying and selling their tokens, it’s all on the blockchain, for everyone to see.

We might also call them “equity tokens,” as I explain in this video:

Think about how this will revolutionize Wall Street! With traditional IPOs, shares are priced so that early investors can quickly sell out their shares at a profit — and many do. With this Security Token model, we have security(hence the name) that everyone is getting the market price.

If you want to help this vision become a reality,  join our open-source token project.. This is a radically better way of doing public stock offerings. Smarter stocks, indeed.