The Asian and European markets are up, but the real test on whether this relief rally holds legs will come during the U.S. session.

No doubt there will be many bulls who have been on the sidelines, watching the recent face-melting rally since March and kicking themselves for not taking part, who will see this latest pullback as an opportunity to get in. On the other hand, a 6% drop for both stocks and bitcoin is a clear sign that volatility isn’t quite dead just yet.

Today is Friday, and that means the weekend is coming up. For most traders and investors, that means there are precious few hours to decide exactly what side of the line in the sand they choose to stand on before the decision is locked in for 48 whole hours by the closing bell of the New York Stock Exchange.

Economic data is in from the U.K. today, and all of it is worse than expected. Here’s one sensational headline from The Guardian this morning.

GDP is the one economic indicator making headlines of course, but manufacturing and industrial production figures were nearly twice as bad as economists were anticipating, and construction output was squashed by a walloping 40%.

All this is kind of baked into the pie though. When seen in the context of a coronavirus lockdown, it should be understood that these numbers are going to be brutal.

Remember, investing in stocks isn’t really about what’s going to happen next month so much as it’s about understanding what’s likely to happen in the next few years. This is a difficult task given everything that’s been going on lately.

The big question is when will things get back to normal? Or, how long will it take for the economy to return to the strength it was at in February?

Optimists might think that a complete recovery may be possible some time next year while pessimistic views vary. Some predictions span out as far as a decade or more.

Personally, I believe there’s even a possibility, though not a very likely one, that we never return to that time. For better or worse, COVID-19 may have altered the course of humanity for centuries to come.

Of course, as with most truths, reality will likely play out somewhere between the optimistic and the pessimistic views. Also, it will likely be different in different places. In New York, they’re clearly easing restrictions, while Houston, Texas is now considering reimposing lockdown measures.

So now, see if you can decide within the next few hours how you want to position yourself for that. Now, hopefully we can understand some of the volatility that’s happening. Here we can see the VIX volatility index, with yesterday’s spike clearly visible even in this long-term data. 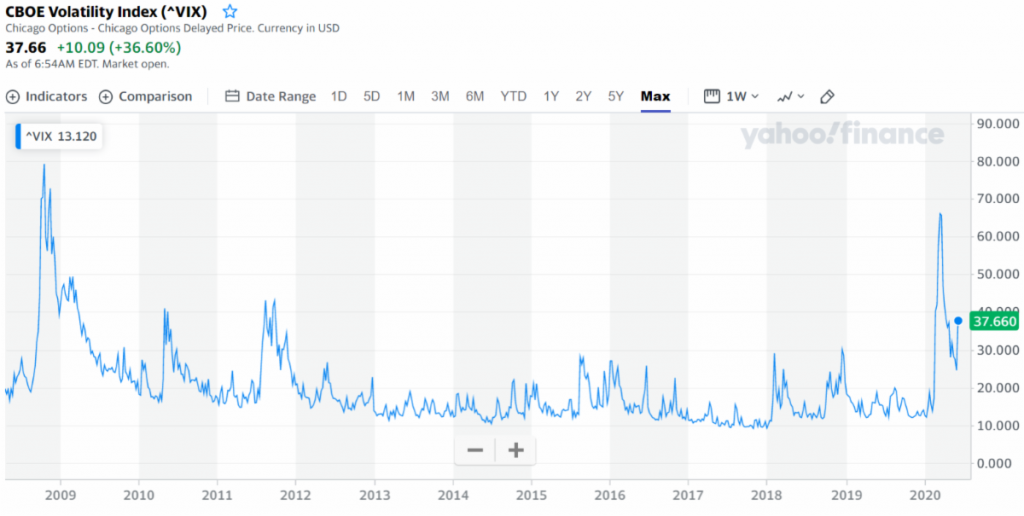 My shorts on the stock market are still in play, and I’ve reduced my exposure to the crypto market for the time being, at least until we get some better indication of where this is going.

For your entertainment this weekend, I’d like to broach a subject of great social and political import that has been coming up a lot lately. Even though I’ve received a lot of flak on social media, I will not be silenced, because the topic is freedom of speech.

Although I don’t often find myself holding the same view as Facebook founder Mark Zuckerberg, in this case, I believe that he’s in the right….

Zuck himself has been under tremendous pressure for not censoring posts from President Donald Trump. Now, we won’t go into what Trump was saying, it clearly wasn’t very nice. Twitter did take the option to censor the same speech, which I believe is the wrong decision.

Free speech is simply not free if it is censored.

Rather than explain to you why, I will simply show you two Ted Talks that prove this point. Each from a completely opposite point of view but come to the same conclusion. So….

If you tend to lean liberal or vote Democrat, watch this video now.

If you’re more conservative or support Republicans, watch this video.

After watching either of these videos, or both, I hope that you can come to the same conclusion I have. Indeed, it may give a bit of insight into how I like to do all my analytical thinking.