Even though we said in yesterday’s update that we weren’t going to cover the Microsoft TikTok talks, it seems things have now escalated to the point where it seems difficult to ignore, especially in light of unprecedented intervention from the president.

Shortly after we hit the send button, President Donald Trump stated that TikTok now has a deadline of September 15 to sell off all its U.S. operations to an American company, be it Microsoft, Apple, or anyone else. In addition, the president has stated that the U.S. Department of the Treasury should get a cut on whatever deal is put in place.

These statements have of course been met with fierce opposition from critics, and from China themselves, who labeled them as extortion.

Not that I’m about to take sides here, but given the way this year has been going so far, I don’t think it would surprise anyone if World War III was waged over a teen dance app.

Or perhaps, as several on Twitter have suggested, we should let the armies sit this one out and just have Trump and Chinese President Xi Jinping settle this with a 15-second dance off.

The messed up thing is that as detached from reality as this scenario may seem, stocks are way more far gone. Despite the massive real-world implications that pursuing this sort of policy can have down the line, investors seem just as comfortable buying today as they have for the last few months. It almost seems like nothing can interrupt the rally now.

Virtually all the biggest tech companies in the world are making more during the COVID-19 lockdown than they did during the same period last year.

… And, whether they need it or not, these companies are now raising even more money by issuing fresh debt to the market. Remember how the Federal Reserve recently announced that it’s starting to buy corporate bonds? Well, it seems that corporates are taking it up on its offer, in a BIG way. 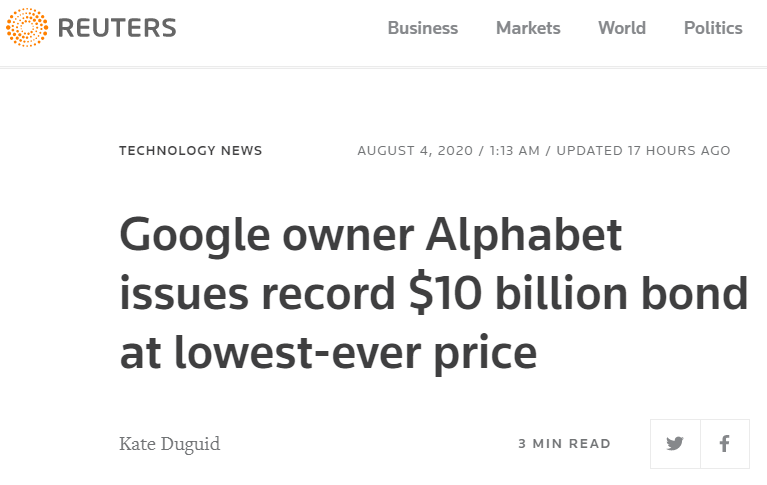 Guess we probably shouldn’t be complaining. More than half of the money they’ve raised is earmarked for cool projects, for example ones involving social justice and green energy initiatives. Of course, if we think about the fact that there’s an infinite amount of money available for such things to those that have the right credentials, $10 billion actually seems like a small amount.

Along with stocks, precious metals are also flying today. Gold is testing the ultimate psychological resistance of $2,000 per ounce as we speak, and silver is up about 4.5% so far today. Some of the cryptocurrencies are moving but for some strange reason bitcoin is again still as a rug.

This lack of movement is made even more strange by the fact that the world’s largest digital currency has been seeing extreme volatility lately. Even an endorsement from Dave Portnoy didn’t even seem to budge bitcoin today.

In this video we can see the leader of the Robinhood plebs in a livestream, stating that if the Winklevoss twins come over to his house in rowing outfits and explain bitcoin to him in a way so simple that he doesn’t need a password, then he’ll get onboard and convince all of his followers to pump the cryptocurrency. In this tweet, we can see the twins accepting.

With or without Robinhood traders or presidente Portnoy, bitcoin is now unstoppable. Mati Greenspan Click to tweet