Many people tend to forget this, but we’ve been running on an experimental monetary policy system for over a decade now.

The normal pattern is that when times are tough, governments and central banks borrow money in order to ease the burden. Then when times are good, they pay that money back.

Several valiant attempts to normalize monetary policy have been made over the last few years. All of them have failed miserably, as interest rates remain artificially suppressed and central bank balance sheets remain bloated.

When pondering the potential ramifications of low and negative rates in the long term, Howard Marks wrote in a pre-COVID-19 note, titled “Mysterious,” that markets would begin to punish companies for holding cash on their balance sheets.

Nearly a year later, we hear Michael Saylor of Microstrategy describing the company’s massive U.S. dollar cash reserves as a melting ice cube and watching as he pushes his chips all-in on bitcoin.

Indeed, as we’ve seen, the stock market, which was rather disinterested in $MSTR’s massive cash reserves, is rewarding the company handsomely now that these reserves have been exchanged for bitcoin.

As some of you may know from first-hand experience, buying large quantities of bitcoin in a regulated environment is not always simple, especially when you’re a multinational corporation that has to answer to shareholders and regulators.

So, it certainly could take some time before we hear of other companies copying this new reserve strategy.

The question is, if we do see other CEOs following in Saylor’s footsteps, what could be the potential impact on bitcoin’s price?

Well, according to our calculations, they could be quite significant. If even half a percent of all the companies that would benefit from making such a move do, it will completely drain the total available supply of bitcoin. The race is on.

Stocks are not running so hot today, with the losses being led by the FAANGMs and the Nasdaq, which is now just 1.5% away from it’s lowest point going back to July. Mati Greenspan Click to tweet

Of course, at that time, less than two months ago, that same level was the all-time high. 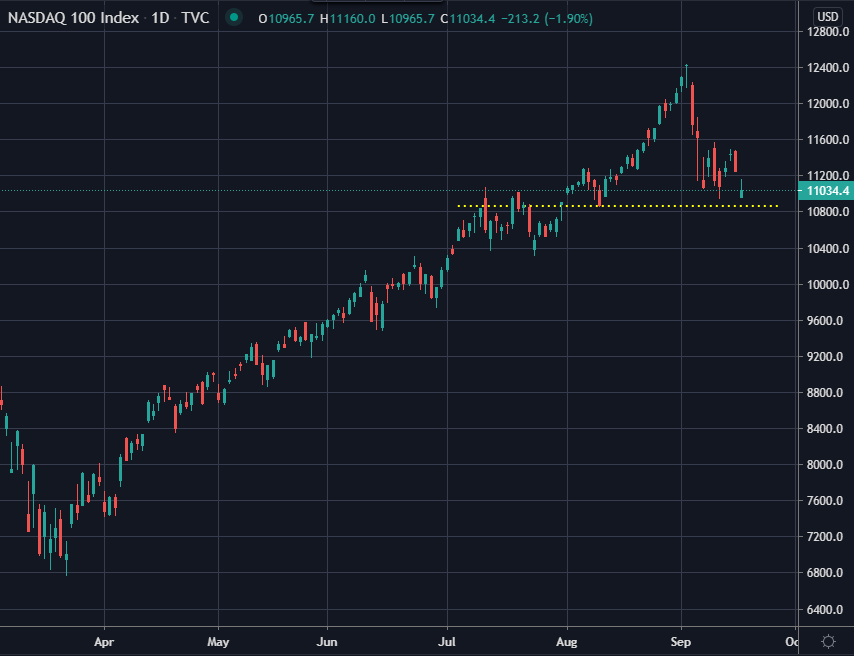 See, this is where markets get interesting. Many traders will no doubt take this as an opportunity to buy the dip. On the other hand, if this level fails to hold as a support and we see a break below, it could put a rather large dent in the momentum play that seems to be so popular these days.

For the moment, anyone really trying to play momentum must be pretty frustrated. Commodities, treasuries, and even the U.S. Dollar Index (DXY) have been remarkably flat for the last few weeks.

Here’s a bit of an interesting one for you. To provide some background context, we are looking into super short-term data, so it doesn’t really mean much at this point, but certainly there is a potential for it to turn into something bigger.

Here we can see three popular cryptocurrencies and their price movements over the last two days. Each of them has seen a significant surge during this period, but the timing is quite different for each. 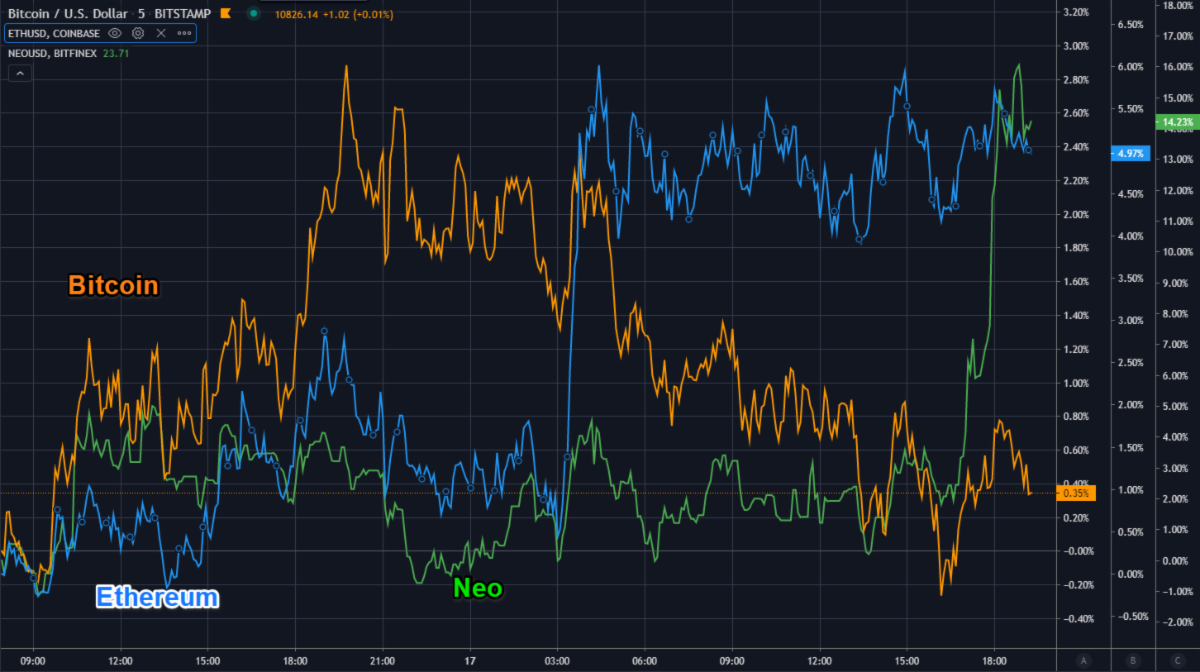 This is a very different dynamic than we’re used to, where momentum traders tend to pick up on one cryptocurrency and then we see spillover into other digital assets.

These things are rather correlated so the timing usually lines up a lot more neatly. What’s even more strange is when looking at the daily performance tables, yesterday bitcoin was up, while virtually all the altcoins were down, and today we’re seeing the exact opposite.

When we think about what’s happening in the traditional markets as noted above, it seems like the momentum play is growing increasingly difficult, as the markets are now in a consolidation pattern.