One criticism that often comes up when speaking with skeptics about crypto trading is the prospect that whales control this market.

Well, that may be true, but the issue isn’t any worse than it is in any other market. The big story crossing financial media today is about a large hedge fund who’s been pushing around the world’s biggest tech stocks.

So all the narratives about the Federal Reserve, QE, new retail money, stock splits, tech equities being immune to the virus, and pure momentum have fallen by the wayside, and now it’s clear that a record-breaking month of August was largely due to a single player.

With the amount of $4 billion, which was levered up to a notional amount of about $50 billion, it seems to have been enough to carry the wayward index to unbelievable and unrealistic new highs.

Incidentally, the “bloodbath” we’ve been seeing in the equity markets over the last few trading sessions is being blamed on the unwinding of those contracts.

And me, I have been over here pondering what that kind of damage a whale of that size might be able to accomplish in a smaller market such as bitcoin. …

So, did the Japanese equity whale affect bitcoin and the subordinate altcoin and DeFi markets? Mati Greenspan Click to tweet

One thing we do know is that over time, the day-to-day correlation between bitcoin and the S&P 500 reached an all-time peak during the height of the pandemic fear, but it has now returned to its natural uncorrelated state. However, that’s not to say that investors aren’t taking their cues in one market from another.

To add clarity on the timing, we should at least check out the chart. Here we can see the two assets rise over the last few months and the sizable pullback in both. 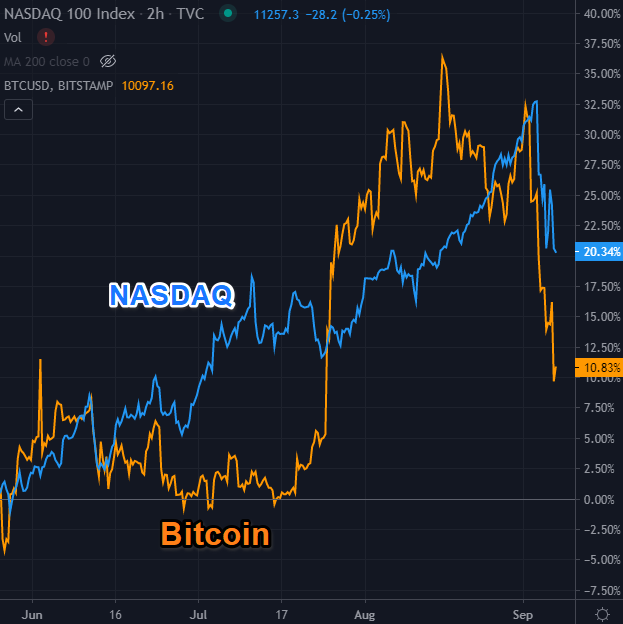 Of course, any analysis of this style is wide open to subjective opinion, but if you’re asking me, I don’t see too much connection. Not in the rise, which was felt much less subtly in late July, nor in the correction, which came nearly 24 hours ahead of the stocks.

What I mean is, if you want to build a case that what’s happening in stocks is affecting crypto, shouldn’t the stock move have come first?

As we’ve seen many times in different markets, including but not limited to the case of Softbank highlighted above, we won’t always know the real reason for the short-term market movements, and the precious few times when we do get a hint may just come at a time when it’s way too late to act.

By my count, traders had exactly three clear opportunities over the long weekend to buy bitcoin under $10,000.

One thing that really stands out about this pullback, though, is the absence of large volumes. It’s clear that there’s a battle happening at bitcoin’s most significant barrier, but given the psychologically importance of this level, you’d think that the stakes would be higher.

According to Messari Crypto, the estimated volumes across crypto exchanges have been down quite significantly over the last week. In fact, volumes were much higher throughout the month of August when the price of bitcoin was more stable.

A quick look at the stats on bitcoin’s blockchain and the institutional futures markets are similarly lackluster. 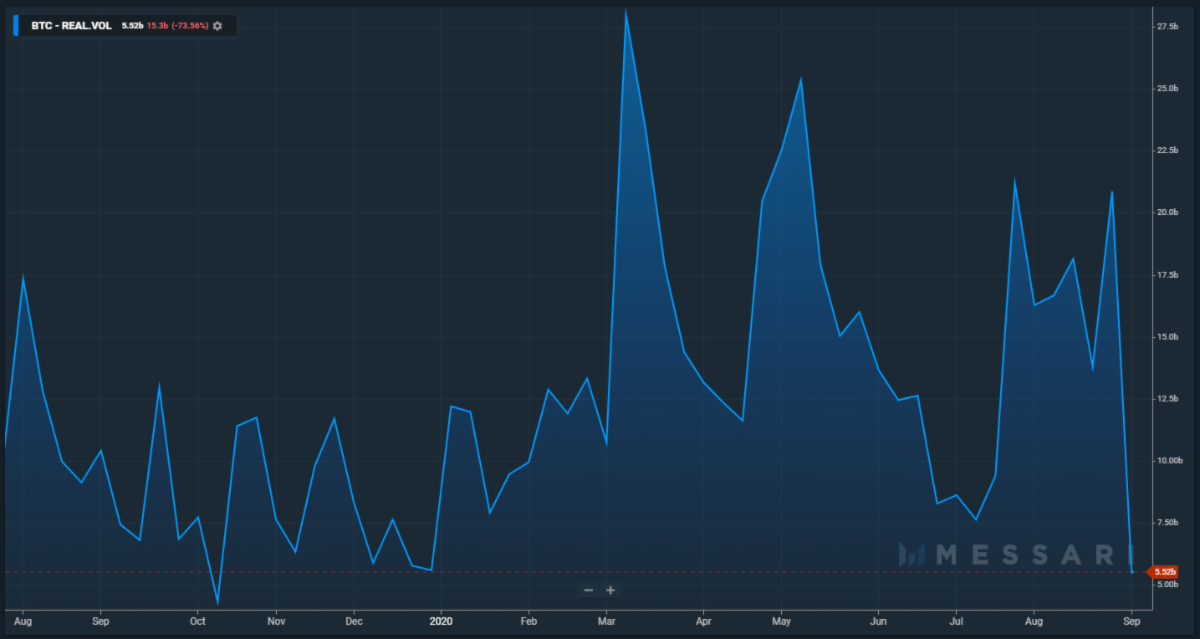 Glancing at bitcoin’s chart, it’s quite possible that we may be in for a downward breach. However, two thoughts are driving my personal bullish sentiment at the moment.

The first is that CME gap which is still open, just a fluke length away from the current prices. It closes at around $9,660 or thereabouts. The second is the indicator just below that, the 200 DMA, which currently sits at $9,000 and change.

Thirdly, is the question that I keep seeing pop up on social media, especially among long term hodler: Who in their right mind is selling bitcoin right now?