There’s been so much news over the last few days that it’s a bit difficult keeping up with it all. One thing that seems a bit too important to miss, especially for those of us invested in big tech, is this:

In a recent report from Congress, Google, Apple, Amazon, and Facebook have been found guilty. After a 16-month bipartisan investigation, it’s been decided that action must be taken to break up these tech giants.

How to accomplish this, on the other hand, may not be not so bipartisan.

True to the crux of the philosophical difference between the parties, the Democrats are gunning for hard-line changes to spin off the different chunks of these titans.

The Republicans, on the other hand, would probably opt for much lighter legislation, making it more difficult for them to buy out up-and-coming competition in the future.

With the Senate now focused solely on trying to approve President Donald Trump’s Supreme Court nominee Amy Barrett in record time, the job of breaking up big tech will fall on the next Congress. The 116th U.S. Congress will be installed in January, after we know the results of the Nov. 3 elections.

By this time, I’d imagine there aren’t too many citizens who will be voting solely based on antitrust platforms, but it would be nice to see if we can at least get a question about it in tonight’s vice presidential debate between Vice President Mike Pence and Sen. Kamala Harris.

Though with all the plexiglass they are planning on putting up, it may be difficult to get through to anyone over there.

Stock markets are flying today, as we see a full-on risk rally in play. I’m not sure what sparked it, and no game-changing short-term narratives have emerged aside from the president backpedaling on his recent decision to nix stimulus negotiations. Mati Greenpan Click to tweet

Gold and silver are up slightly, and the U.S. dollar is falling. Of course, we don’t want to read too deeply into these intraday movements, and the main theme over the last few weeks has been consolidation, but it is quite astonishing to see the main Wall Street indices up 2% by lunchtime.

Digital assets are sitting this rally out. Overall, the board showing top coins by market cap has been fairly mixed over the last month. Even in this volatile market, investor patience is often tested. 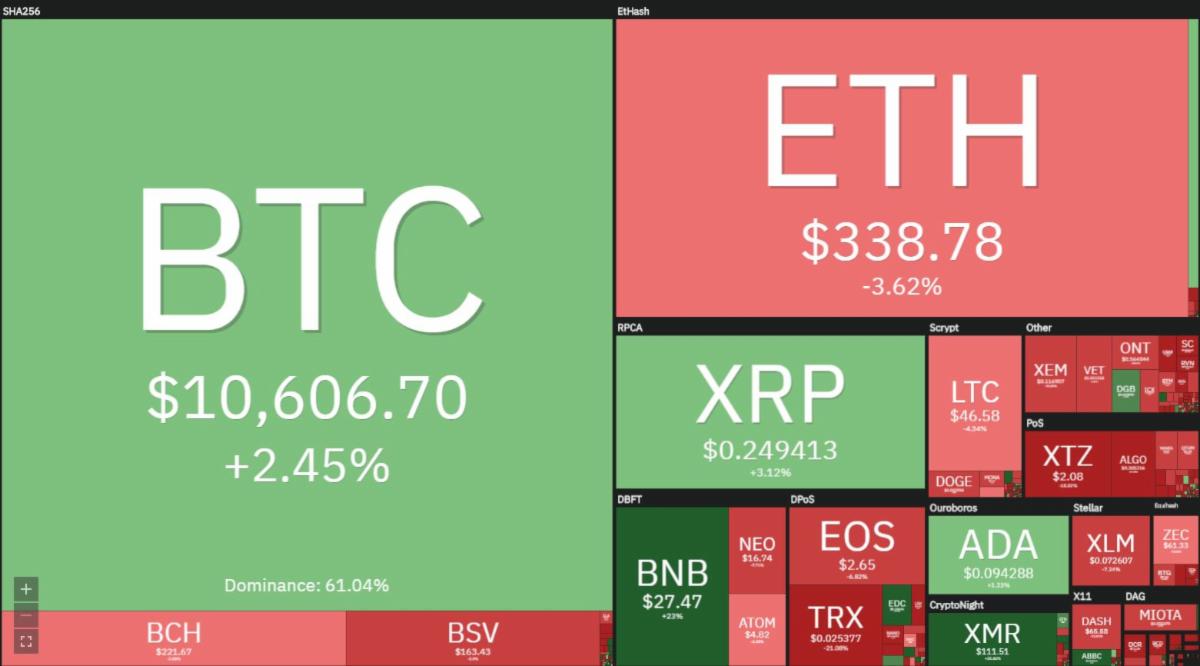 Even though we’re not headed for the moon at the moment, I’m pretty satisfied with this. It shows that the market is taking time to process the recent gains and that the high level of correlation that exists within the crypto market may be fading somewhat.

Perhaps it’s just me, but I do feel that price should somewhat be related to value, and that value varies widely between different projects, networks, and companies.

The graph we highlighted yesterday showing the deep time correlation on the short-term charts between bitcoin and the U.S. stock market was a bit of a shocker for me.

Most likely, there are some heavy algorithms in play who are scalping any divergence, and it would be extremely satisfying to see those bots get rekt.

On a personal note, we’d like to wish a fond farewell to Eddie Van Halen who passed away yesterday. Rest easy, brother.