Wall Street and the stock markets have flipped from bulls to bears in the aftermath of yesterday’s Fed announcement. Mati Greenspan Click to tweet

It’s becoming clear to all that the outrageous money printing is simply unsustainable in the long term, but that’s not the only headwind for the markets today.

Sure, there were a few analysts who celebrated the Fed’s support for the markets, but even those optimists might have trouble looking past the fact that the underlying reason for them being so accommodative is that the economy is in the pits.

Yesterday, the OECD (Organisation for Economic Co-operation and Development) put out a rather grim forecast for the global economy, indicating we could suffer a dip of about 6% this year. If we get a second wave, and this prompts further lockdowns, the decline could intensify to about 7.6% (red bars). 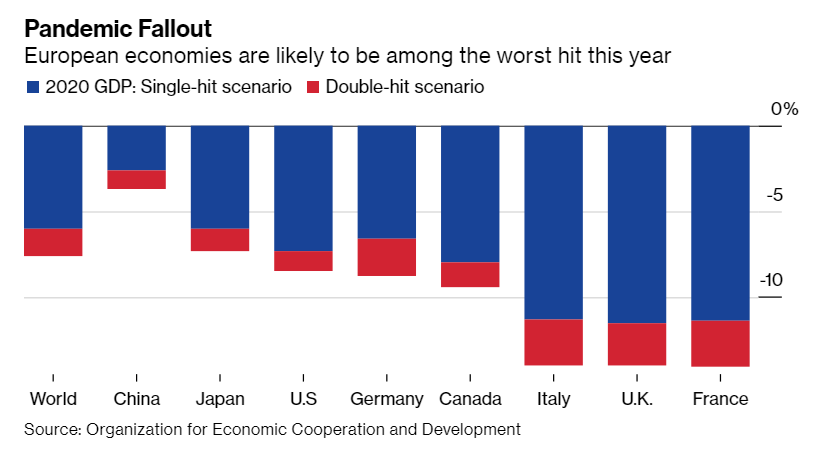 The second wave that they’re talking about is another headwind plaguing investor sentiment today, as many states in the U.S. are seeing a sudden uptick in new cases.

Also, the global figure for daily new cases hit an all time high yesterday of 135,578. Of course, this could be due to increased testing, but whether you want to call it a second wave or a continuation of the first, the virus is clearly not gone.

Despite this data, protests are intensifying in across the U.S. Anyone who was thinking that the BLM movement will easily blow over should probably think again.

A few days ago, protesters in Minneapolis, where George Floyd was murdered, managed to exert enough pressure on the government that indicated plans to disband the police force in favor a community protection initiative. Let’s pray for them.

As of yesterday, protesters in Seattle, Washington completely took over Capitol Hill and declared the entire area near the 11th precinct police department to be a new Autonomous Zone. For live footage and updates check out hashtag #CHAZ on Twitter.

According to BMJ reader Matt Case, who is on the ground there…

For all these reasons, and for the simple reason that stocks were already way over-extended and disconnected from the underlying economy, stocks are down today. I try not to brag, but it looks like my short position (yellow arrow) that I entered on Monday was quite well timed at the top of the market. 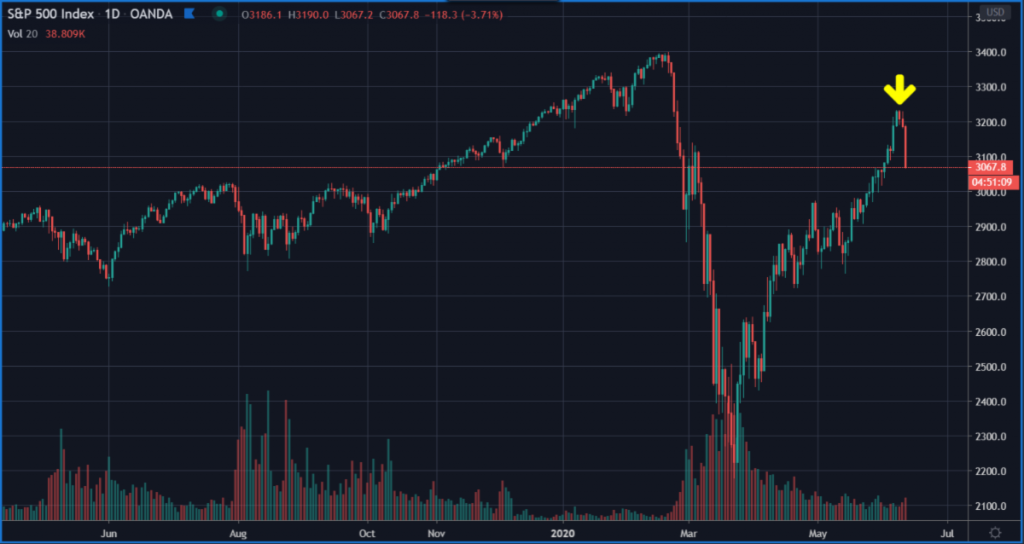 The current situation can hardly be described as a panic at this point though. Both gold and the U.S. dollar are pretty much flat on the day as of this writing. So even though risk assets are selling off pretty intensely, there’s no real flight to safety happening at this time.

Obviously, we’ll need to monitor the situation as this is subject to change.

Along with the stock markets, bitcoin is taking a hammering too today, as well as the rest of the crypto-market. Some coins are even seeing double-digit red numbers on the board.

Here we can see bitcoin (orange) and the U.S. stock market (blue) completely unraveling in harmony. The purple circle is yesterday’s Fed event, for reference. 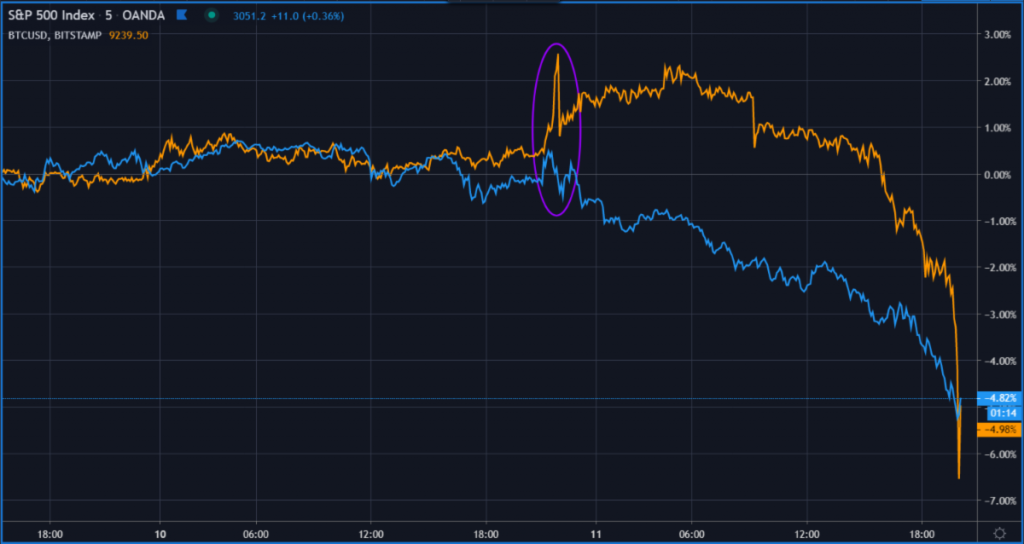 Obviously, those who were hopeful that the two markets might soon decouple from one another (raises hand), are gonna have to wait a little (or a lot) longer.

Bitcoin, along with the entire emerging digital asset class, are very much considered risky assets. The fact that bitcoin had any reaction at all to the Fed yesterday is a clear sign that either a) institutional money is playing a much larger role in the market these days, or b) retail traders are getting more savvy and reacting more to their surroundings.

Either way, the market is growing up fast. As the old meme goes, this is good for bitcoin.