The feeling of nostalgia can be a powerful motivator for a brand, and not just for me, as I’m sure many of you have also probably spent hundreds, if not thousands of hours as a child playing video games.

So the thought of Atari making serious strides into the world of blockchain and digital assets is certainly something that caught my attention.

Apparently, the producer of the world’s first mass market video game console has been watching the world’s newest forms of internet money for a while.

I’m not really sure how I missed the announcement on May 19 that they will be accepting payments with litecoin for the new game console that comes out this holiday.

The new console does look sick and includes both a newfangled controller, as well as the old one-button classic joystick dating back to Asteroids, Frogger, and Missile Command. Of course, the announcement that I couldn’t miss was that. …

So the new console will come preloaded with the Ultra game store, which apparently utilizes blockchain technology in some way, which I’ve yet to understand. Darn it! Why is that so exciting??

A quick scan of Atari.com makes it pretty clear that they’re going into the product launch of their new gaming console not just as a giant in the video game industry, but also as a crypto project with something to prove.

As a video game fan, I may actually try using the tokens if there’s an easy way to utilize them with their platform.

As an investor, I’ve just about had my fill of utility tokens. If the Block.One ICO has taught us anything, it’s that it is far more profitable to own equity in an innovative company than it is to hold a utility coin that they’ve created. Mati Greenspan Click to tweet

However, as an investor, I’ve just about had my fill of utility tokens. If the Block.One ICO has taught us anything, it’s that it is far more profitable to own equity in an innovative company than it is to hold a utility coin that they’ve created.

As a stock, it’s plain to see that Atari is currently at multi-year lows. Sure they were top dog in the 1980s, but since then, the likes of Nintendo, Sony and Microsoft have more than dug into their market share.

So when I looked up their price, I was expecting something astonishing, but nothing could’ve prepared me for what Bloomberg’s data is showing. … 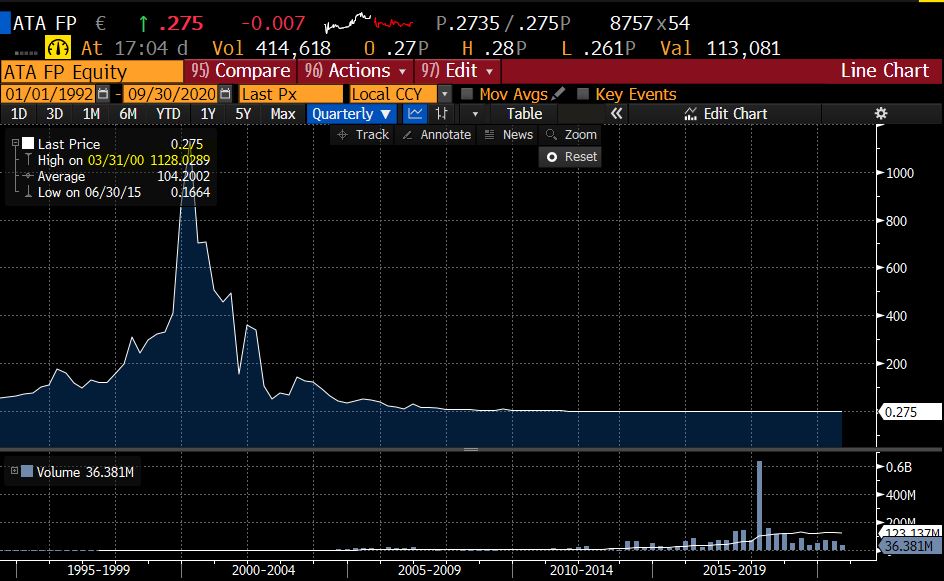 Even though their dominance in gaming had waned, the stock was clearly a full-fledged participant of the Y2K tech bubble, with a peak price of $1,128 per share on March 31, 2000. At the time of this writing, the price was 27 cents per share.

Now, I’m not an expert stock analyst or anything, but shouldn’t the planned launch of a new comeback flagship console from an industry incumbent at least be putting some sort of upward pressure on stocks?

I mean, there are 7 billion Atari tokens that will soon be released into an entirely new marketplace. There are only 154 million outstanding shares available in the market, according to Bloomberg terminal figures.

Unfortunately or fortunately, as the case may be, there isn’t too much to report in the way of market movements today. Stock indices are making a bit of a recovery, not necessarily showing strength, but the weakness of last week is gone for now.

Even the crypto market is mixed today, something that seems quite rare these days. Let’s see how long that lasts though.