With all the fanfare of a new public IPO, Robinhood has gone live today on the NASDAQ under the ticker $HOOD.

Unfortunately for them, investors haven’t quite shown as much affection for the stock as they have for the platform and the price in early trading is tanking. At least not yet. Here we can see the first 12 minutes of trading and as we can see, even though they’re the preferred venue for a lot of meme trading, this time the joke is on them. 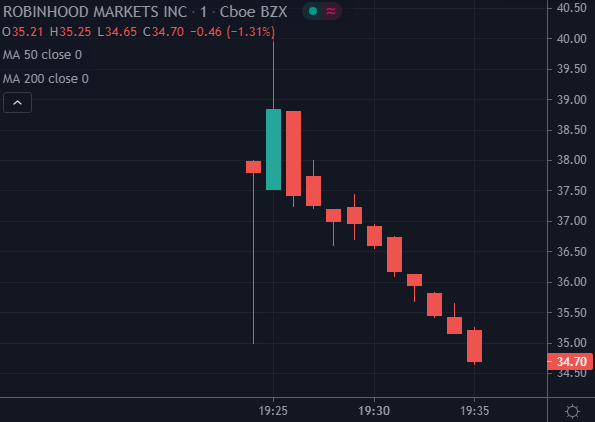 Though I should note that the situation is pretty fluid and as I’m writing the stock has created a temporary bottom around $33 per share and has now reclaimed the IPO price of $38.

Of course, there’s plenty of reason for sentiment being sour going into their first day. Not only have the recent events of Gamestop and how they halted trading for their clients in mid-play made them largely unpopular on retail trading forums like FinTwit and Wall Street Bets, but they still have the SEC hot on their case.

Some 81% of their revenues in the first quarter were from the model known as “payment for order flow.” Meaning, that they make the bulk of their money by selling their user’s trading data to hedge funds. A practice that is banned in many countries already and is now seeing serious scrutiny from incoming SEC Chairman Gary Gensler. So basically their entire business model is up in the air.

Still, I wouldn’t sell this stock short. Not even if I could. Clearly they’ve captured the imagination of a young audience that is just now waking up to wealth creation through capital markets and according statements today, they plan to use this to position themselves “to be the only app that people use on their phones for money.”

Ambitious? Definitely. Impossible? Probably. But for all the flack they get for dropping the ball on their client’s toes that one time, it doesn’t seem to have sent their users elsewhere for the time being. True to our stance on almost all IPOs and token offerings, let’s give it a few days or weeks to find a normal trading range before plunging in.

One more thing I wanted to highlight today is a spending bill that’s making its way through Congress at the moment and gaining “bipartisan support.”

Now that I’m looking at the headline again though it actually doesn’t even seem like that much money. Perhaps we’ve been desensitized to money printing lately. Yes, Biden does want to get another bill through once this passes, possibly in the neighborhood of $3 trillion, but the amounts we’re looking at are much lower than the $6 trillion he was asking Congress for earlier in his Presidency.

There are a few things that irk me about the bill. First, and this may just be me nitpicking is that it sets aside $66 billion for Amtrak, while only allotting $15 billion for EV recharging infrastructure. To me this just shows how the government chooses to throw money at old problems rather than pave the way for the future. America was literally a pioneer when it came to railroad transportation and now they’ve fallen far behind.

It’s just a shame how rather than being the pioneers again and investing in the future they’d rather pile money into old technology and even steal from new innovations. Not EVs, they’re investing in that but part of the plan for funding this bill introduces a new tax on crypto companies…

Really?? Government spending has literally been out of control these last couple years and most of the money spent has been printed from thin air. The fact that they’re now planning to steal from the future of crypto infrastructure to make their own silly ends meet is infuriating.

Not that this hurts hodlers in any major way but if this does pass, it will likely squeeze the margins of the on and off ramps leading to less market competition and more consolidation of the industry in the United States going forward.

Advanced apologies for any spelling, grammatical, or factual errors. Our VP of Content is out today and tomorrow.