The race to form the world’s first large-scale, fully functional central bank digital currency (CBDC) has now been won, and by one of the most unlikely candidates. 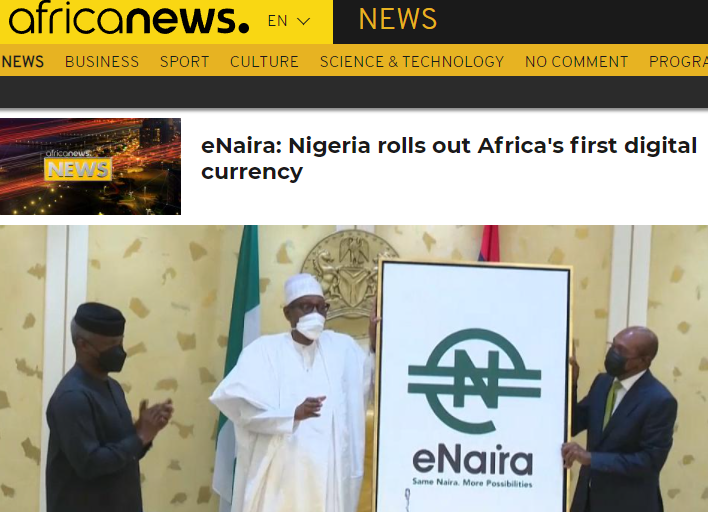 Technically, it’s not the first CBDC. The Bahamas, for example, rolled out the Sand Dollar, but the eNaira surpasses it both in size and scope of implementation.

It all seems a bit rushed, to be honest, and it certainly looks like a huge gamble for Africa’s largest economy.

Earlier this year, the Central Bank of Nigeria banned the usage of cryptocurrencies in the country, only to reverse that ban shortly after.

During the short time that bitcoin was illegal tender, the digital currency’s price in Nigeria went through the roof, trading at a 40% premium to what the rest of the world was paying at the time.

We want to applaud analyst Wonder Godzo for bringing us the story and putting together this research piece, which includes some key details about the new digital currency.

In fact, the press conference was a low-key affair, with only three local television stations attending. Further, Nigerian officials did not take any questions from the the audience.

So it’s safe to say that there are a lot more unknowns than knowns at this point.

But is it good?

Instead of opting to use a leading public blockchain like the Stellar Network or Cardano, the CBN chose to use a private company named Bitt, who released this extremely brief blog post, which did seem to stress the goals of interoperability and financial inclusion.

On the face of it, that is indeed a good thing. At this point however, it’s impossible to know exactly how good this will be for the people of Nigeria.

What we can say is that the eNaira will not be quite as authoritarian as the Chinese CBDC and probably less freedom friendly than most cryptocurrencies.

As far as product launches go, this one has a high probability of being really messy.

Still, Nigeria now has a chance to prove that they’re way ahead of the game when it comes to digital innovation.

Most developed countries have too much invested in the old infrastructure to move quickly on this, and that’s where we see Africa essentially leapfrogging the rest of the world in FinTech deployment.

No matter how the eNaira’s rollout goes, it will be an excellent case study for the dozens of countries currently at various stages of researching, developing or piloting CBDCs.

Whatever happens, now that the naira has gone digital, the government will very likely have unprecedented insight into the financial activities of their citizens. So it’s a good thing people are already familiar with Bitcoin.