In yesterday’s post, we highlighted a particular auction at Christie’s and what it might mean for the markets.

Nine pixelated cryptopunks were to be auctioned for an expected sum of between $7 million and $9 million.

The NFT market did seem like it was cooling down, and the sale price of these particular punks can give us some valuable insight into where the market might be headed. Mati Greenspan Click to tweet

We’re pleased to report that it was a smashing success! 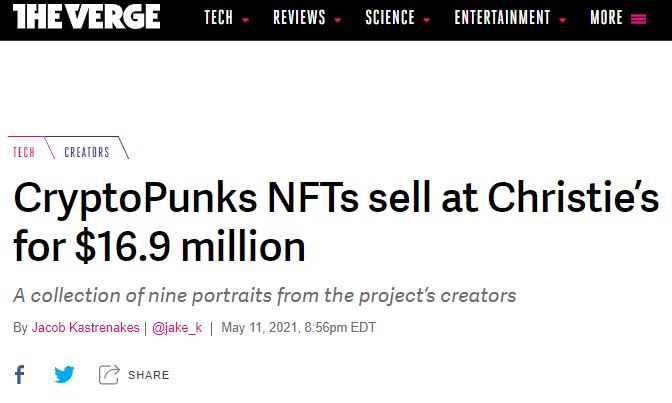 Needless to say, this market is still red hot. Even larger though is the announcement from eBay, the world’s third-largest online marketplace, that they are now allowing the sale of NFTs on their platform.

Guess it’s not just a fad after all.

Although many economists were expecting a pickup in inflation, very few expected it to happen this soon or by this much.

In an even harder slap to the Federal Reserve, core consumer prices, which we’ve discussed previously as the main metric the Fed watches as it excludes food and energy prices, experienced its largest annual gain since 1996.

If only America’s problems stopped at inflation. Last Friday’s jobs report highlighted some serious issues in the economy, a new phase of a failed recovery, one that has yet to be addressed by policymakers. 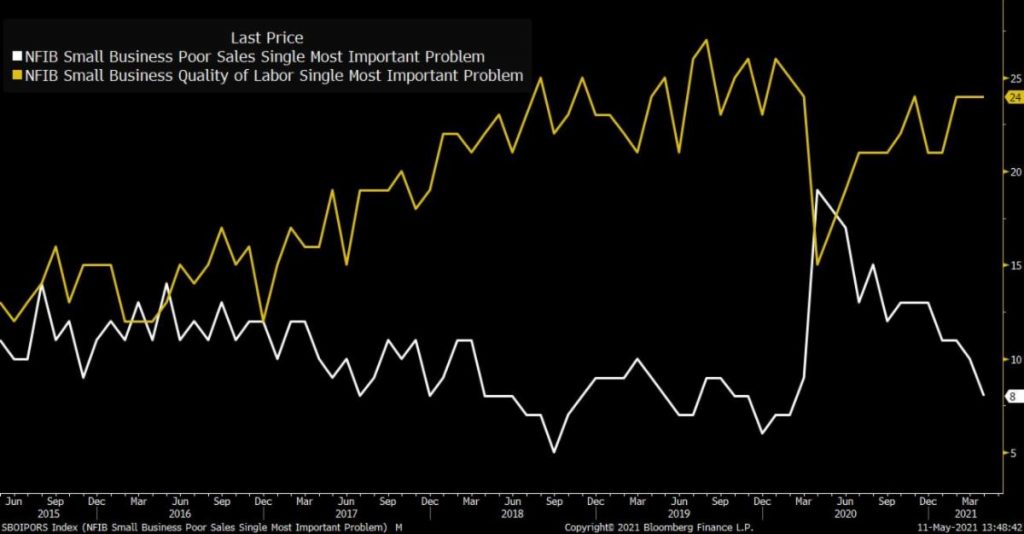 The white line represents the demand side of the equation.

We can clearly see the large spike at the beginning of the pandemic in March 2020, where business owners’ number one complaint was the lack of sales, indicating very low demand for goods and services.

The yellow line is the supply side, which shows how businesses are now more concerned that they cannot find quality workers. But wait…

Surely, with so many people out of work, it should be easy for companies to go out and hire.

It seems to me, and this is purely speculation, that companies who fired employees at the start of the pandemic are now having trouble hiring whose workers back at the same wages.

I’ve heard from several people in a few different industries that their jobs are getting harder. Employers are demanding longer hours and more production for the same pay.

On the other hand, those who lost their jobs are getting extended unemployment benefits.

Why would they go back to that environment when they can just as easily sit on the couch and watch TV or surf the internet?

As we speak, employers are starting to realize that if they want to hire quality workers they will need to incentivize them with higher wages, which as we can see from the bustling pickup in demand for goods and services, they should be able to afford without an issue.

Higher wages means more money in the system, which will most likely lead to even higher inflation. It’s a vicious cycle, and unfortunately, I do not share the Fed’s optimism that inflation will be transitory.

Bitcoin was created to fix this, as was Doge. Well, Doge was created as a joke, but with an annual supply increase between 3% and 4%, and rapidly rising adoption, it’s looking a lot more attractive than the U.S. dollar right now.