“Like gold, US Dollars hold value only to the extent that they are strictly limited in supply.”

Less than seven years later Helicopter Ben, as he’s since been nicknamed, became the father of quantitative easing and set the world down a path of unfathomable money printing.

Today, it seems like what’s giving the Dollar it’s value is simply the perception that it will hold its value better than anything else through the current crisis. However, it’s not clear where that perception is coming from.

At the moment, governments and central banks are creating money faster than they ever have in history. So it would seem to me unreasonable to assume that fiat currencies will hold their value for very long. Mati Greenspan Click to tweet

Very soon, once this mass-liquidation process is over, be it a day, a week, or a month, people are going to be holding on to a lot of fiat. That includes asset managers, businesses, and every day people. The good folks at r/wallstreetbets are already salivating thinking about how they will invest their upcoming stimulus checks. After all, one thing that most people don’t realize is that inflation is good for the stock market.

As long as companies have a solid business model then holding a piece of the company is certainly preferable to holding a piece of paper. For reference, here’s the main stock index of Venezuela over the last few years, priced in Bolivars of course. 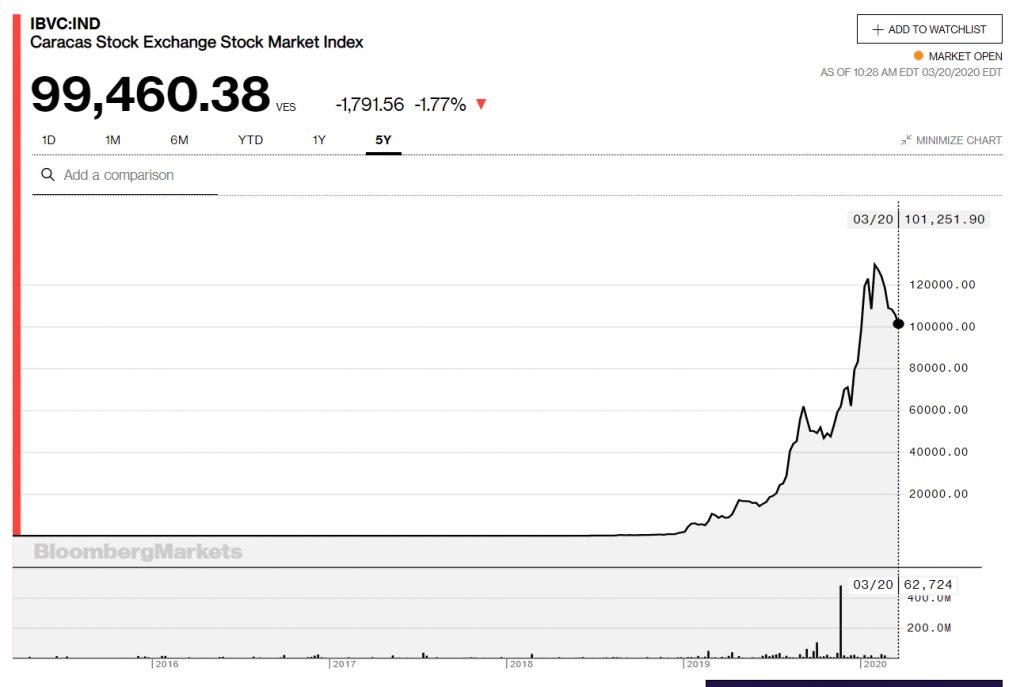 So, as long as social distancing doesn’t deteriorate into social disorder and chaos, it would seem to me far more prudent to be holding assets, especially limited supply assets, then paper… but that’s just me.

Is it the End?

All the above is purely speculation though. A simple hypothesis of how the world might look in a few weeks or months. Last night, the Governor of California has put the entire state on lockdown.

What’s essentially happening here is that the entire global economy is seeing intermittent shut-downs and travel bans in order to combat the virus. The inevitable question arises… can the global economy be turned off and on like a light?

Even with ample helicopter money flowing, it simply doesn’t seem very likely. According to a smart Doctor who I’ve been following on YouTube for a few weeks already, to think that we’ll have a widely circulated vaccine within the next year would be hugely optimistic.

So even if the lockdowns can somehow get coordinated enough to be effective, we could be looking at April of 2021 before we can all sit in restaurants and attend concerts and sports events again. So how does that work, the government just supports everyone until then and expects them to sit at home and wait?

So, the theory that things are at some point soon going to return to the way they were before doesn’t really seem likely to me. Really hope I’m wrong, but the more people I speak to, the more I’m hearing theories about a coming apocalypse. How do you even invest for that?

On the other hand, as an investor it always pays to be an optimist and indeed, many have theorized that just because things have forever changed doesn’t mean it’s for the worst and whatever is coming next might put us in a better situation than before. I much prefer this way of thinking.

Many articles have already been written in the crypto media pointing out how bitcoin has risen nicely over the last few days while the stock markets have been flat to negative. People are calling it the decoupling.

Well, it certainly would be nice to think that way because it would indicate that the peak of the panic might finally be coming to an end. However, a quick look at the charts shows that those calls may be a bit premature.

Here we can see bitcoin in orange and the S&P 500 in blue, since the beginning of the current crisis. I don’t know, they still seem quite intertwined to me. 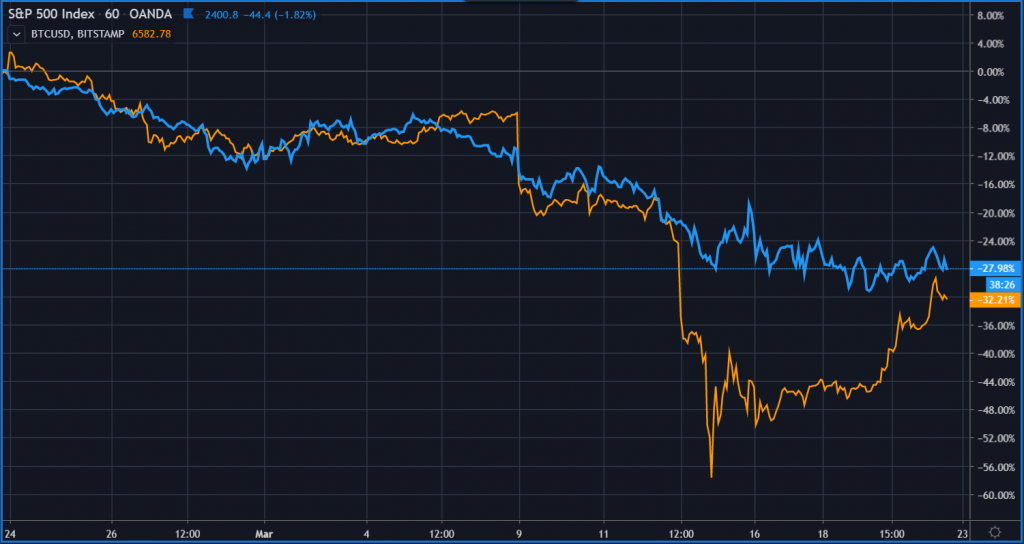 The big drop on March 12th came at a time when the stock market had reached it’s limit down. Limits have have very much helped to stave off some of the selling action. At this point, bitcoin is simply catching back up on some of the lost ground but overall the losses are almost exactly in line.