Seems like the markets have finally found some level of sanity today. Though things are still quite volatile, at least the reduced level of movement is providing some breathing room. So at this time, I’d like to ponder with you about a few of the ways that the world has been altered by the virus.

Probably the biggest thing seems to be the amount of people working from home. We’re still waiting for a proper estimate but by this point just about everyone on the planet who has the option to work from home is doing it.

Pleased to say that I’m ahead of the curve on this one and actually started working from home in November. Pleased to say that my productivity has been drastically increased in that time. The home-schooling thing on the other hand, is not so productive. Children need fresh air and sunshine. Hope the schools start up again soon.

The world of video conferencing, for example, should be doing very well at the moment. Zoom stock is literally zooming at the moment. Nearly doubled since the beginning of the year. 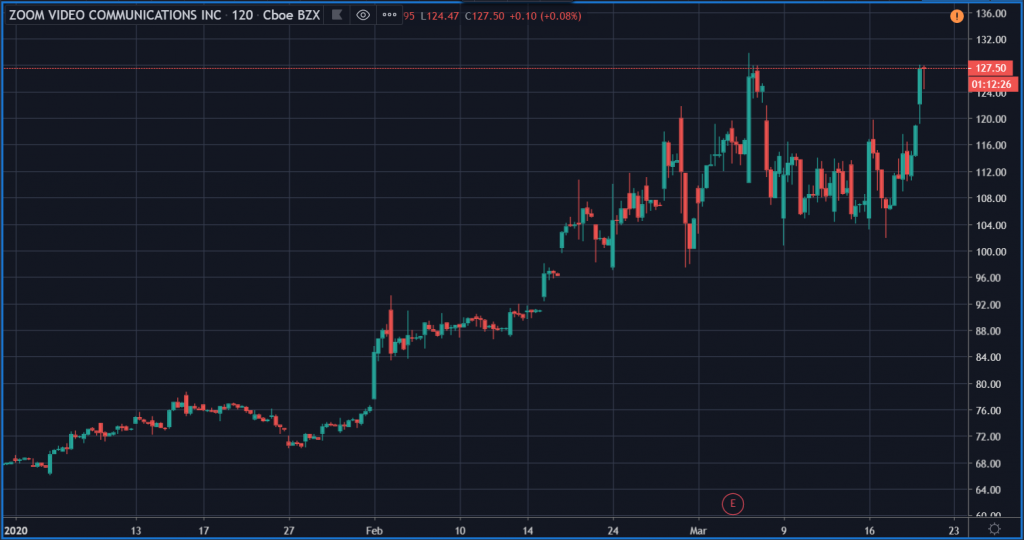 From everything I’m seeing, investors should be considering the concept of social distancing and what type of companies might be affected by it. Because, as far as it seems this new practice may last even longer than the virus itself.

Another thing that’s likely to be forever altered is the way that governments give away money.

The implementation of things like helicopter money, suspending mortgages, and other free handouts from the government are now being considered very seriously by many of the biggest countries in the world. The idea is simple, if people are sick, they should at least have the ability to stay home. As well, people who’ve lost their jobs due to the virus shouldn’t have to go into financial ruin, not when the government can help them out until the economy gets back on track.

These are two very different circumstances that politicians seem to be conjoining at the moment.

Regarding the first, we have to realize that just giving people money will not necessarily make them stay home. Also, that not everyone who is contagious will necessarily feel sick, so they almost certainly won’t want to sit on the couch, especially not with all that money in their pocket. So, unless the government is willing to enforce lockdowns using martial law and the military, then this tactic won’t be particularly helpful and the virus will continue to spread for a very long time forward.

As far as those who’ve recently lost their jobs, and sorry if you’re among them, we really don’t know how many people are in this category just yet, nor how long the economy will be in the pits. I mean, if the virus goes away quickly then we’ll be in a good place, but what if it takes years before restaurants, bars, and theaters can open safely again? Will the government simply implement Universal Basic Income for that entire time?

The thing is, these type of policy tools are kind of like Pandora’s Box. You can’t put Pandora back into the box. Once they’ve been implemented once, for whatever reason, they’re much more likely to be used again and again.

We saw a great example of this in 2009 with Quantitative Easing. At the time, it seemed a necessity. By 2019, even a small hiccup in the repo market had the Fed injecting billions. I mean, why would Powell not use a tool that was available to him? Especially, when faced with a choice between use the tool and watch the stocks rise, or not use it and face mass criticism when the stocks fall.

Very soon, UBI and helicopter money will most likely be very commonplace in many countries.

This of course, would most likely lead to large levels of inflation. The value of a fiat currency is often purported to relate to the total amount of working hours that the country produces. So, if you have a lot less work hours and a lot more currency floating around, the value of the currency will more than likely come down.

Very soon, the shock factor will wear off and people will be sitting on a ton of cash. They’ll then want to put that cash to work.

Bitcoin, Gold, Silver, precious metals, real estate, even most stocks, just about anything that will hold it’s value when fiat is printed into oblivion.

One graph that I have for you today is truly a sign that people have lost their minds completely. Silver is now at it’s lowest levels in more than a decade. 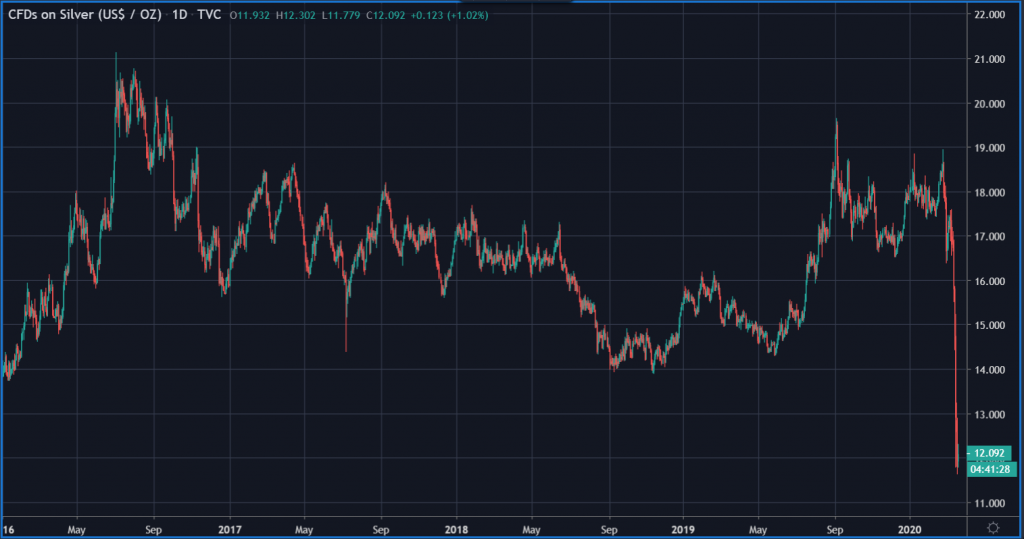 This is especially strange when we consider that pysical silver is incredibly difficult to obtain at the moment. More than a dozen people on Twitter in the 12 hours since I posted this graph have reported to me that they’ve searched online and IRL and could not find it anywhere, especially not at that price.

According to another friend of mine who runs an online physical gold and silver delivery service, the supply line for silver is always pretty weak but at this point it would probably take him about three weeks to fill an order.

So, there is clearly a disconnect between the physical stuff and the paper offered to you by your broker. Does that mean it can’t go any lower? Absolutely not. For myself, I’m accumulating at these levels and will continue to do so should it go any lower.

This is the same strategy I’m currently deploying in my crypto-only account at eToro. I’ve already sent them a wire and will be buying up some more BTC at these cheaper levels within the next few days.