Welcome to the worst earnings season of our generation… probably the worst in history. Except maybe next quarter. Mati Greenspan Click to tweet

Starting today, and for the next six weeks or so, companies will be reporting how they fared during the first three months of 2020. In a way, this is the market’s moment to snap back to reality, or to at least understand which reality we’re in.

The overall economic data has been dismal so far, much worse than most economists were anticipating. Unemployment numbers are nothing short of historic and other data points haven’t been much rosier. So we can probably expect that many companies will be shocking us with their reports.

However, it won’t all be bad. Some businesses are sure to have benefited from COVID-19 and the global response. We’ve mentioned a few of those already in previous episodes but there are sure to be more. This article in the New York Times does a good job of highlighting some of the industries most affected.

What’s important to bear in mind is that the face-melting rally off the market bottom on March 24th has largely been driven by support from governments and central banks who are literally creating money in order to help people and businesses through the crisis.

Will it be enough though to stave off mass bankruptcies? Well, who better to answer that question than the companies themselves. Good or bad, the incoming information will serve to remove a layer of uncertainty from a market that can use all the clarity it can get, and there’s no doubt that these next few weeks will be critical.

As is tradition, the first companies to report are in the financial sector and we’re already off to a terrible start as the Japanese conglomerate SoftBank expects a close to $17 billion loss for their tech-focused Vision Fund.

This is largely due to losses from WeWork and OneWeb, whose business models have been thrashed by COVID-19. According to one analyst that I heard this morning, these numbers are very difficult to digest.

Quantum Economics Analyst Evamarie Augustine has just provided a very aptly timed analysis of the financial sector in her unique blog series, which is looking at how each individual sector of the market is reacting to the virus. According to Evamarie, what was one of the best performing sectors last year, with a gain of 32%, will likely be the second worst performer this year, after the energy industry of course. 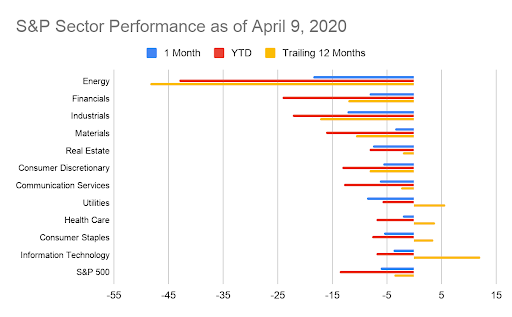 Tomorrow we’ll hear from Wells Fargo and JP Morgan before the opening bell. Estimates are not optimistic.

Obviously, markets are none too happy about all the above, and stocks are down about 2% on the day as of this writing, while gold has broken firmly above $1,700 and is now trading at it’s highest level since 2012.

Bitcoin, however, isn’t doing much of anything at the moment. It did take a little dip last night, but that was mostly a reversal of yesterday’s gains. Since the beginning of the month, it’s largely remained within a tight range from $6,600 to $7,400. 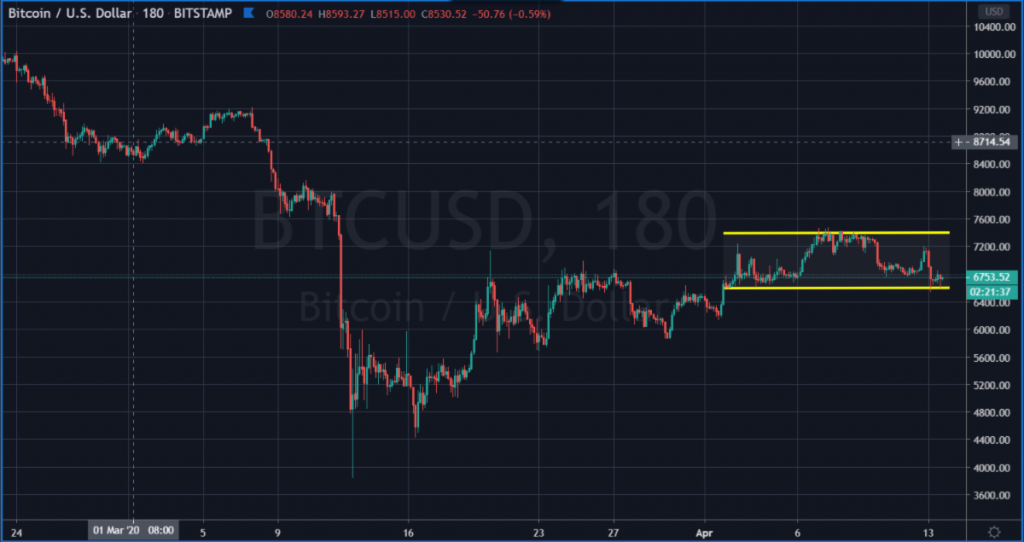 What I wanted to point out though, as we’re now less than a month away from bitcoin’s long awaited third halving, is the effect that the halving can have on the network. Now, rather than going back four years ago, we can actually see an example of a halving that is a lot more recent. Namely, the Bitcoin Cash halving that occurred last Wednesday.

Much to the amusement or chagrin (depending what side you’re on) of many in the market, the price hasn’t moved much at all. In fact, the graph of BCH/USD looks a lot like the BTC/USD chart above, which a narrow range forming between $220 and $280 per coin. 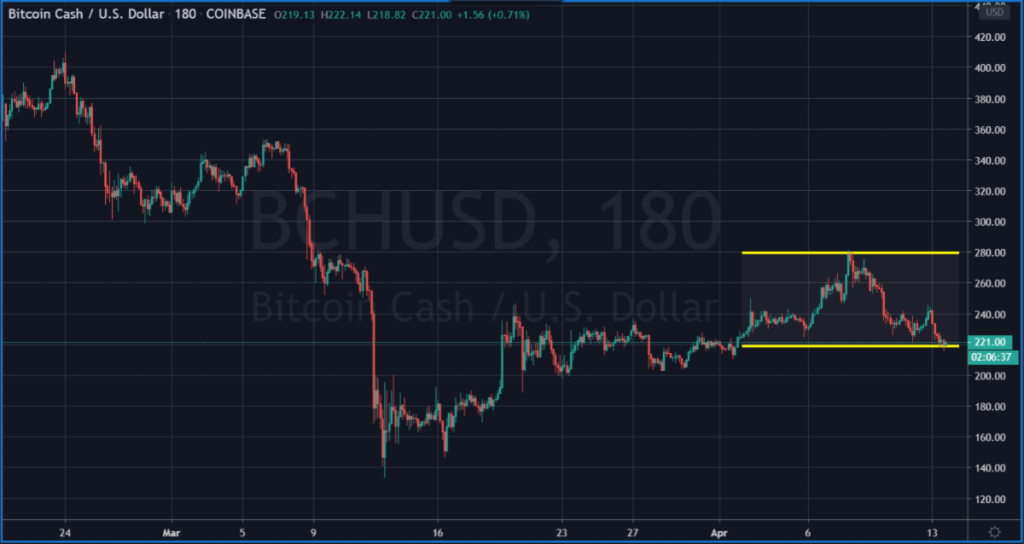 Actually, what I wanted to point out was the sudden drop in BCH hashrate as we see a mass exodus of miners leaving the network. You can probably spot the halving point on the graph…

It’s fairly normal for the hashrate of a cryptoasset to drop off after a halving event but this one seems to have been accentuated by the fact that BCH and BTC miners are quite compatible. So, it seems like many BCH miners have simply switched over to BTC temporarily in order to take advantage of the higher block reward until the halving.

So, overall, not a great indicator of what’s to come as we might like. We can probably say with a fair amount of certainty that the hashrate will drop off after the halving. However, since the hashrate has grown so quickly in the last few years, even a large drop would not necessarily have any noticeable impact on the performance or security of the network.

As far as price goes, who knows? I’m not convinced that the halving event will have any immediate effect on the price. It might, but then again, it might not. Over time however, and in the long term, fewer new coins will likely translate into a higher price per coin. And the concept of scarcity is certainly a value add over the current fiat currencies, especially in this time of phenomenal money printing.

Many thanks for reading. Please feel free to share this note in any social media feeds or chat groups where it might be appreciated. Don’t forget to wash your hands.