It might seem like a bunch of craziness, but I just can’t shake the feeling that we are witnessing something truly historic today.

The regulators stepping in to stunt retail investors and help out the billionaires is something we probably could have expected. But to watch the online trading firms, who are supposed to be on our side, blocking people from trading in a free market, is both unprecedented and intolerable. Mati Greenspan Click to tweet

In particular, Robinhood, whose entire motto is about opening access to the free market, is now pulling the rug out from under the very people they pretend to support. We’re now getting reports that the brokerage has not only canceled orders, but is now actively closing positions without customer consent.

As someone who has been working inside various online brokerage firms ever since the great financial crisis, I can say that their actions today are simply reprehensible.

It seems I’m not the only one, as social media is blowing up right now, and the outcry is palpable.

Even politicians, on both extremes of the great American divide, are crying foul. 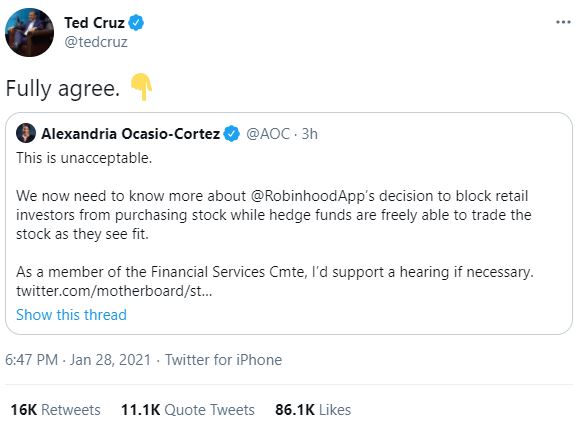 Shares in the popular Reddit stocks like GameStop, AMC, and Blackberry have crashed today, only because the platforms are not allowing people to buy them.

They claim that the reason they’re doing this is because volatility is too great, but at this point, it seems their actions are only creating more volatility.

We were expecting a crash to take place, and for many new traders to get burned, but nobody could have expected that the platforms themselves would be the ones to deliberately burn them.

They are going to have to open the markets back up at some point. These are real companies, after all, and they can’t just force them to go private.

In the meantime, the anger and frustration on the WSB subreddit only seems to be growing. Needless to say, their bullish calls have not abated, they’ve only gotten louder.

It will be fascinating to watch over the next few sessions, especially as a lot more attention has turned this way.

Further, an investor has already filed a class action lawsuit against Robinhood in the state of New York. A different individual filed a lawsuit in Chicago.

More legal action may follow, and we can expect a full-blown regulatory inquiry, and all of President Joe Biden’s new regulatory heads will have a powerful platform to bring greater oversight into a very opaque market. Even as I type, Sen. Elizabeth Warren is on CNBC advocating to “have a cop on the beat.”

As we know, the government’s solution to everything will always be more government, but that doesn’t really help here. They had a chance to fix this in 2000, and they had another chance in 2008, but for all the grandstanding, markets are still very clearly rigged.

To many involved in bitcoin and cryptocurrencies, the answer is very clear. Luckily for us, an alternative market has been under construction for the last few years, the decentralized marketplace.

It’s a place where transparency is enforced by code and not by men. It’s a really exciting time to be alive.