It’s been nearly a month since the GameStop saga came to a head with a high of nearly $500 per share, but the story is far from over.

Yesterday, in the face of the broad sell-off, $GME started making massive moves upward, gaining about 300% from the lows before suffering a slight pullback.

It’s not the same monster-short-squeeze-induced rally that we saw then, nor is it coming with all the fanfare and mass media attention, but it is happening nonetheless. 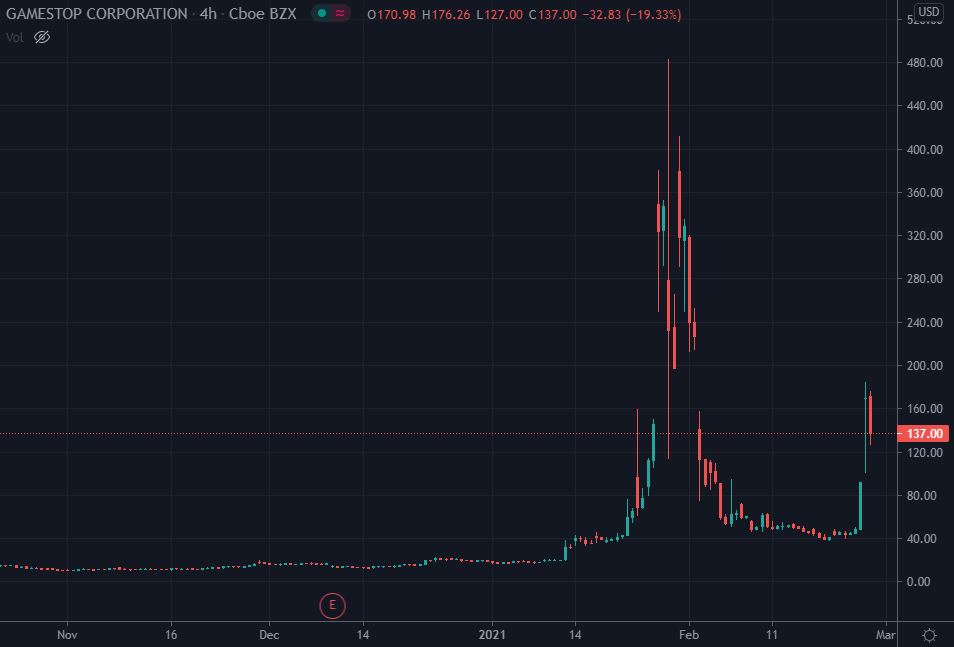 The great saga of how a few foulmouthed hoodlums on Reddit took on the great suits of Wall Street in a modern day David-meets-Goliath fashion turned out to be a blatantly false narrative perpetrated by pundits and the media, but the fact that so many are holding shares of GameStop seems to give us a lot more insight into the current mood in the market.

Much more than say rich versus poor, to me this looks like a case of the poor figuring out how to band together in order to fight the system.

Sure, the company GameStop is doing everything they can to upgrade the business model and bring it into the 21st century, but speculation on the shares now seems to be more of a fundamental play not at all dissimilar to that of bitcoin.

If cash is trash, then we need to be looking for rare assets of limited supply. Well, there’s only about 50 million shares of GameStop outstanding, and many of those are already off the market. So in a very real sense, $GME is even more scarce right now than bitcoin.

For those of you with the patience to read through some of the threads on the Wall Street Bets forum, you’ll see a lot of junk, for example sarcastic and/or cynical comments, but the real insights come from those who are providing the fundamental analysis.

They’re closely watching the current short interest and the float, counting how many shares are available in the market and how many they’re not going to sell back. They’re basically just hodling.

The big bond sell-off continues today, as economists scratch their heads. Several have tried to label this as a rotation from large caps to small caps, but by now, it seems clear that many investors have shifted their risk preference from high to medium.

After testifying before Congress for the last two days, the chairman of the Federal Reserve, Jerome Powell, or J-POW as we like to call him, has said exactly what the market wanted to hear.

More specifically, he stated that the Fed will continue leaning on the money printer even after the economy turns back to normal.

It’s a variation of the same rhetoric we’ve been hearing since long before the global pandemic, but somehow, the markets seemed to hear it differently this time.

Here we can see the yield of the U.S. 10-year Treasury bond spiking today.

Remember, yields move inverse to the price of the bond, so a sharp move upwards like this means that investors are selling off their worthless over-abundant government debt. 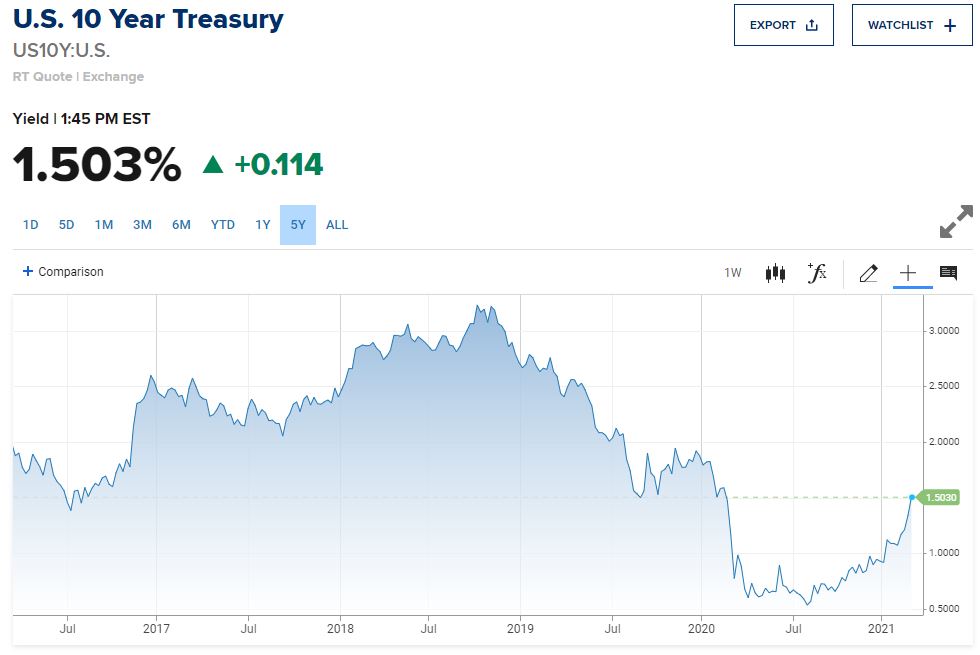 So far the sell-off seems to be fairly contained. It can be seen in the bond markets, the top tech stocks (the Nasdaq is having it’s worst day in four months), and cryptos, which are trying to rally but clearly struggling to reclaim the highs.

But that’s the thing about this new meme economy and magic internet money.

The reason for buying it might be as simple as liking memes and dogs, but that doesn’t stop anyone from buying it.

The other day, we highlighted a growing trend in the non-fungible token marketplace, and it seems that just in these last few days, valuations in this unique market have been taken once again to ridiculous proportions.

For those of you still not familiar with NFTs and how they work, here’s an excellent article for beginners by none other than the New York Times. 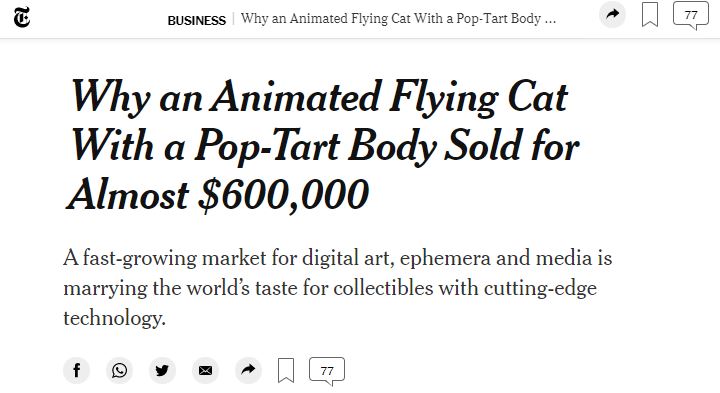 After all, if the point is to find the rarest possible assets, what can be rarer than something that is completely unique?

To be perfectly honest, the Nyan Cat probably should’ve fetched a lot more than that.

Even though the creator seemed to be quite pleased with the payout, I feel that with a bit more tactful marketing, it could’ve gone higher.

Some of the other NFT sets, however, are probably selling for a fair bit more than what they should probably be worth. Mati Greenspan Click to tweet

Some pixelated pirate pictures have already sold for hundreds of thousands of dollars. I imagine it’s only a matter of time before authorities want to know if there’s some attempts at money laundering going on. Either way, it’s fun to watch.