“In the midst of a routine inspection on a space station orbiting Earth, astronaut Katherine Barnes is visited by an extraterrestrial, who takes her on a tour of the universe- past, present, and future.”

So reads the log line for the world’s first ever full-length feature NFT film, “SILHOUETTES.”

It’s kind of like a “Disney’s Fantasia” meets “2001: A Space Odyssey,” featuring the voices of Helen Day and Dick Terhune, and it will be packed with digitally tokenized goodies.

The movie will be released next month in conjunction with our friends at the Litecoin Foundation and the Blockstream/Pixelmatic team with Samson Mow on a state-of-the-art platform that accepts litecoin and liquid bitcoin.

Will this be the next Netflix-like service allowing media creators to more directly monetize and distribute their content, or will it be just another super-cool hyped-up movie release gimmick?

Time will tell. For press inquiries, please contact me directly.

As I write, Federal Reserve Chair Jerome Powell, aka J-POW, is presenting the forward path for monetary policy, of which we did a deep dive in yesterday’s BMJ Newsletter.

Powell seems to have shrugged off the poor employment figures, emphasizing confidence that the “labor market will be strong in the next year or two,” while at the same time stating that “inflation could turn out to be higher and more persistent then we expected.” Mati Greenspan Click to tweet

The question-and-answer portion of today’s meeting is one of the roughest I’ve ever seen. The chair has clearly avoided many of the questions asked thus far, and on several occasions, he made statements that don’t fully add up.

The analysts are going to have a field day with this over the next day or so, as they strive to parse this dumpster fire of a press conference.

For what it’s worth, markets are holding up pretty well. The stock market took a dive at the start, but by now, it has mostly recovered the levels it had before the latest Fed statements. 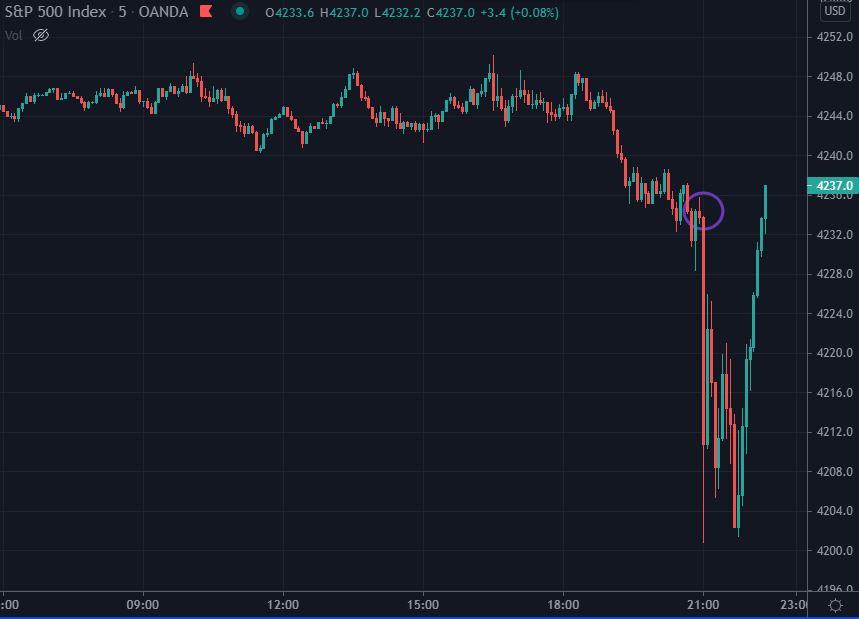 The simple fact of the matter is that even though Fed officials are clearly concerned about the latest inflation data, they don’t seem to be in any rush to do anything about it.

As Scott Minerd, the global chief investment officer of Guggenheim, calculated in a live Bloomberg interview today, the soonest we’d be practically looking at a rate rise would be late 2023.

In the meantime, they’re still printing about $120 billion a month in quantitative easing, and they don’t even seem ready to reduce that amount.

So even though the bond markets have made some small movements on an updated outlook for the next few years, for now the markets remain flush with cash for the foreseeable future.

The only market move that is clearly visible on long-term charts is the U.S. dollar, which has gained against it fiat peers. There is no doubt that this can be corrected, as other central banks follow the Fed’s new lead.

As you know, we’ve been talking a lot about El Salvador lately and their latest move to the bitcoin standard, as well as what this might mean for other countries.

It’s always important to highlight contrary opinions though, and there’s one that stands out. …

Clicking the above image will take you to the video interview, which runs about 15 minutes.

Of course, as we mentioned, this is a contrary opinion.

He has not tried to pay for a beer on Bitcoin Beach, which generally uses the lightning network and where bitcoin already is money.

His point about them sucking all the U.S. dollars out of the country is noteworthy, but of course perspective is important.

From Hanke’s perspective, bitcoin is not money. Therefore, having the “real money” leaving the country could be very problematic.

However, if your perspective is that bitcoin is money and that the U.S. dollar is inferior money, then this really isn’t a problem. I guess time will tell.