If their intention was to cool down the markets, then they failed miserably.

It seems like market participants (myself included) had something very specific in mind for what the Fed was about to do, but what actually happened was a bit uninspiring.

One beautiful thing about markets is we can get a great view of how outlook is changing in real time. Here we can see the U.S. Dollar Index at the exact time that Fed Chairman Jerome Powell took the stage. Each candlestick is set to one minute. 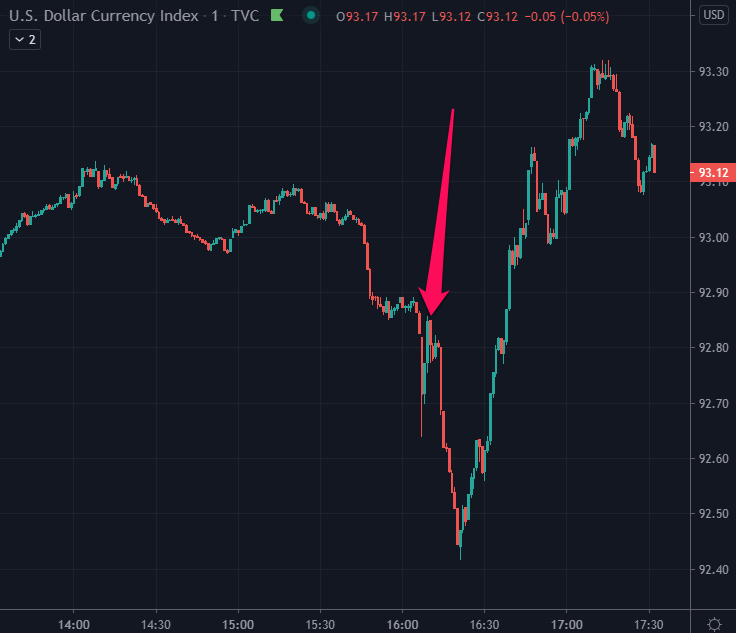 As we can clearly see, there was a lot of negative momentum going into the event, but very early into his speech, the markets reversed direction and the dollar began to rise. The same pattern is currently playing out in several other markets, as we will review below.

It seems that a number of economists and analysts (raises hand again) were anticipating the start of some groundbreaking campaign to spur on inflation.

What we got instead was a minor pivot, one of many such recent pivots in that direction. So, even though we didn’t get a dovish turn from the Fed, it seems that it was a lot less dovish than markets were expecting.

What’s the big deal then?

There’s no doubt that certain members of the financial media are making a huge deal out of this speech. Yes, some are even framing it as a “historic” change in policy.

If that were true, no doubt the market reaction would be a lot larger than we’re currently seeing. Instead, the U.S. Dollar Index hasn’t moved more than 0.5% over the last week.

So despite the short-term chart above, which appears to show something dramatic, we’re really witnessing some rather lackluster market activity.

Indeed, the Fed has been pushing for higher inflation for quite a while. Let’s compare today’s headline to the following one from May 2018. …

Notice the subtle differences. From that time until this, their rhetoric has been getting stronger but the action is the same.

This is the root cause of the disappointment today. Many were expecting action, but instead all we got were more words. This should actually come as a relief for those of us who were worried about the Fed’s higher inflation campaign. However, the market reaction to the speech is cause for grave concern.

No doubt, J-Pow got on that stage feeling like the king of the world, in his mind this strategy shift would be received with admiration and respect, causing a weaker U.S. dollar and stocks through the roof. Instead, what the markets gave him back was a big meh. So, what do you think his next play is?

Not sure if he’s about to back off. More likely he’ll double down. If the markets are demanding stronger action, the Fed will be there to serve it. If not today, perhaps next time.

If there was any doubt about bitcoin’s hearty participation in the broader markets lately, today’s events should quell it entirely. Here we can see CNBC overlaying a chart of bitcoin’s real-time price action during the chairman’s speech. 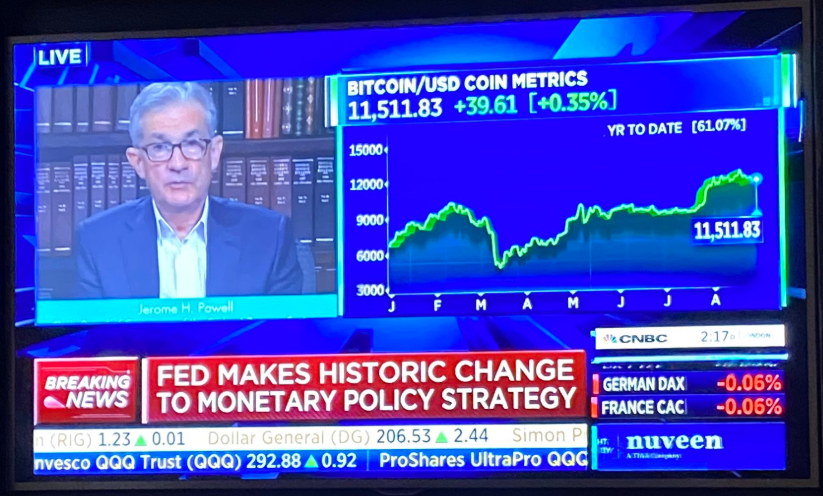 Bitcoin reacted exactly as you would expect, given the view that it is considered by many to be nothing less than a digital form of gold. In fact, the reactions of paper-traded physical gold and bitcoin were almost exactly identical, almost as if BTC were taking some cues from her older sister.

In summation, short-term moves can help us understand long-term trends, but they’re far from indicative. You should definitely share this analysis with everyone you know right now. It’s not only insightful, it’s free.