To say that the United States is behind on crypto regulation would probably be the understatement of the year. Mati Greenspan Click to tweet

It’s quite possible that some of the issues will be cleared up under the new leadership of Gary Gensler, who many expect to be confirmed as the chairman of the U.S. Securities and Exchange Commission on April 12, two days before the Coinbase initial public offering (IPO) is scheduled to take place.

We have no clue who’s calling the shots there right now, but they don’t seem to very crypto friendly at all.

Nowhere is this more apparent then in the SEC’s arduous case against the blockchain-based YouTube competitor LBRY. 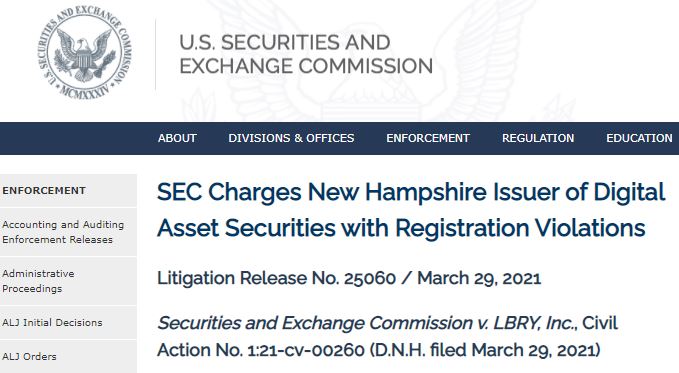 Not only is it clear to all that the project’s only crime was to set up shop in the United States, this case also lends credence to the presumption that, for whatever reason, some U.S. officials are deliberately discouraging innovation within their borders.

To state that LBRY credits, which are the epitome of multifaceted programmable money, are indistinguishable from your traditional investment vehicles, is an extremely thin stretch of the Howey Test that the SEC continues to use as their primary weapon in their war on digital assets.

There has been no fraud here. Nobody has complained. So who is the administration really trying to protect?

Sorry for the harsh wording, but it seems many people fail to understand the broader implications for this case.

Should the court side against LBRY, it would literally put the future of all cryptocurrencies, including bitcoin and ether, in question.

The simple fact that the case of Securities and Exchange Commission v. Howey Co., which was decided more than 70 years ago by the Supreme Court, is still being used a deciding factor in courts today, should give us a sense of how powerful common law is.

Judges generally take their guidance from previous rulings on similar cases, so a negative ruling here could make it easier for them to kill off any project which utilizes crypto tokens. DeFi, non-fungible tokens (NFTs), smart contracts, and just about everything except possibly stablecoins would potentially be on the chopping block.

The large caveat here is geography. In many countries, innovators like LBRY are free to thrive, even if they do need to take special care not to accept U.S. users.

So try as they might, this won’t stop the revolution. It will simply chase it offshore. Web 3.0, the internet of value, is at this point inevitable. Even LBRY will move forward, regardless of the outcome of this case.

Perhaps someday soon, U.S. citizens will need to use a virtual private network (VPN) in order access large swathes of the internet, just like the Chinese do. Oh, wait…It’s already happening.

What can I do?

It’s easy. Write to your congressman to show support. No Kidding.

Although you can do that, I suppose most of you won’t.

Fortunately, there’s a much less cumbersome way to show your support, if you indeed support this cause.

Simply visit the website that was set up for this purpose, which is helplbrysavecrypto.com.

There’s a great explainer video there on the homepage with the awesome crypto maven Naomi Brockwell, who does a great job explaining the idiotic actions of American regulators.

This FAQ is also worth a read, but most important is the petition on change.org, which for some reason only had 15,000 signatures when this newsletter was written.