According to Messari data, a total of $29.4 billion worth of bitcoin traded hands across major crypto exchanges, surpassing the previous record from Jan. 11, by $1.7 billion.

This is a keen reminder that even though prices may move down, the action is actually ramping up.

As cryptocurrencies grow, some more quickly than others, it’s important for them to be able to scale.

Thanks to a smashing debut in the mainstream, Dogecoin’s blockchain has recently surpassed bitcoin in daily transactional value.

That isn’t bad for a meme coin that was virtually unheard of outside the crypto space at the start of the year. 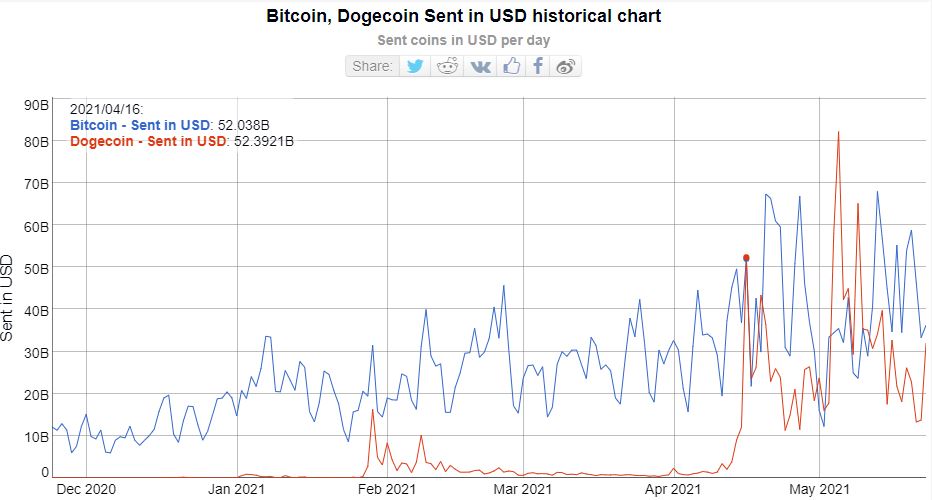 The need for scaling here is apparent, and the “Dogefather,” Elon Musk, has already addressed the issue in a tweet stating…

Now, to be straight, to someone with a rudimentary understanding of blockchain technology, this statement seems a bit like wishful thinking, almost like having your cake and eating it too.

It is not something befitting a literal rocket scientist. To someone whose life work has been in scaling blockchains, for example Vitalik Buterin, the statement probably reads like a child’s demand to buy every toy in the store.

Of course, rather than take it out on Twitter, Buterin responded in a purely scientific way, with a 3,500-word research report exploring The Limits of Blockchain Scalability, what’s needed to achieve maximum potential and how it applies in the real world.

The paper, of course, like any academic one, was reviewed by four of his peers. The paper is highly recommended, and even I was able to grasp most of what Buterin had to say.

My only criticism is that its focus on Ethereum, a platform that enables smart contracts and complex coding, does not necessarily give us much insight into Dogecoin, which is a purely transactional monetary network.

Rather than a logical retort, however, our rocket-loving billionaire friend responded with three words and a recycled, low-quality meme not even worth republishing here.

The fact that Musk didn’t even bother to respond directly to Vitalik, but rather to a tweet from Cointelegraph that was highlighting Vitalik’s paper, only shows us that for Musk, this is all about media manipulation.

As we forecasted on Feb. 4 in a daily newsletter titled Pushing Prices, the market has finally grown indifferent to Musk’s tweets, and unlike then, where the reaction was clearly visible on all charts, the price reaction to today’s tweet was only noticeable to those who zoomed way in.

Even though I’m still holding it, it’s almost comforting to see dogecoin underperforming the market on today’s bounce.

Perhaps now people have learned some valuable lesson about investing based on tweets…or not.

Obviously, I’m not some kind of genius who can predict the future.

Anybody who read my note from Friday, where I stated that another major sell-off was not likely, can probably tell you that.

Credit goes to Oz Sultan, AKA the Crypto Wizzard, for calling the double dip well in advance. It’s not that I feel too bad about hodling through this dumpster fire. After all, it seems I’m in good company. …

Ray Dalio has always been a hero of mine because of his analytical free thought and his impact investing.

Watching  [Ray Dalio ]’s journey from nocoiner to hodler has been one of the most satisfying validations of my confirmation biases I’ve ever received, and hearing him echo my own thoughts on government debt has only strengthened my conviction. Mati Greenspan Click to tweet