Hooray! At the very last possible moment, lawmakers have finally put aside their differences and struck a deal to inject an additional $1 trillion worth of stimulus into the American economy. … or at least, that’s what the headlines might have you believe.

Ok, to be clear, the agreement on the table is only between the Senate Republicans and the president. As we discussed in several episodes of the Blockchain Investor Daily newsletter already, there’s been a growing rift between the Republicans in Congress and those in the White House.

Well, those differences haven’t exactly been fully resolved, but at least they’re now ready for a first draft of the agreement. There is no word as of yet whether the Democrats in the House of Representatives will sign off on this one yet though, probably because it’s only set to be unveiled later today.

Optimistic political analysts have estimated that we might get an actual spending bill through both houses of Congress on the president’s desk by the end of August. The more pertinent question is: will these headlines be enough to move the markets?

In fact, it seems so. The Nasdaq has been struggling over the last few trading sessions, and as of this writing, is about 1.5% in the green.

The fact that the soon-to-be-proposed bill is only $1 trillion, and not more, has been a point of criticism by some analysts and even politicians, especially those on the left who would much rather see $4 trillion or more. But as the stocks don’t seem to mind, I doubt if it will really increase much from here.

You see, as the stock markets are rising to inconceivable levels, the U.S. dollar is eroding quickly, and people are starting to notice. Consider this week’s cover of The Economist. 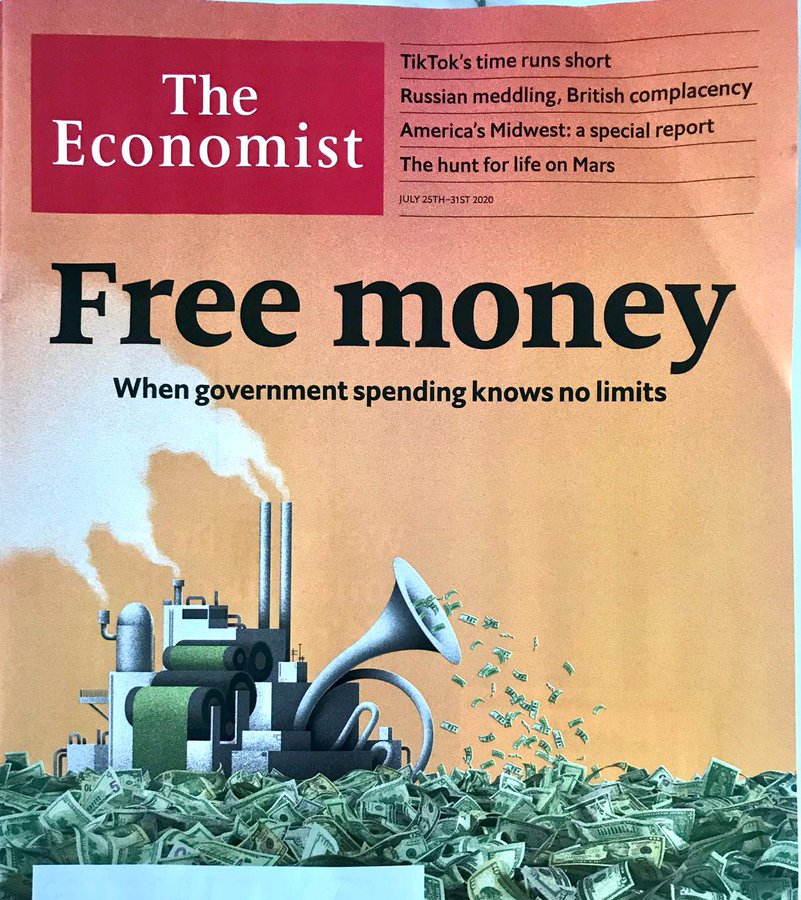 With that we can see, the U.S. dollar is falling at an alarming rate. Here, for example, is a chart of the Dollar Index, which shows the strength of the U.S. dollar against a basket of it’s peers. It’s important to note that the basket is weighted by trading volume, so the chart is nearly identical to an inverse of the euro/dollar. 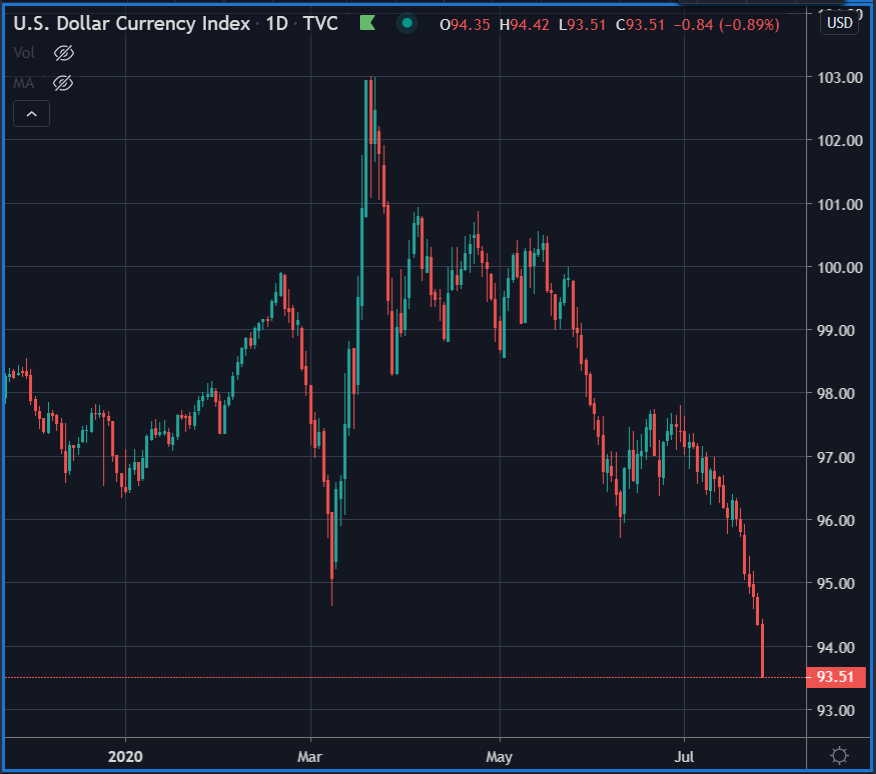 That’s just against other currencies, too. If you think about the U.S. dollar’s value against the stock market, or gold (the precious metal reached an all-time high last night), or against just about any other financial asset, it’s plain to see that people are ditching the buck as fast as they can.

Not in any immediate sense that I can tell, no. These type of shifts tend to take a long time, but certainly the dangerous game politicians have been playing and the extraordinary amounts of free money could possibly have the effect of hastening that shift.

In light of these things, something dawned on me.

Not sure I’ll be able to fully explain it here in writing, but the main idea is that because the market is moving on the idea of too much central bank printing, and general asset inflation, the crypto market is basically missing the main narrative.

In my humble opinion, way too much emphasis has been placed on decentralized finance, smart contracts and tokenization, much of which is highly experimental and therefore extremely speculative.

What might more accurately fit the current macro narrative, however, is the idea of digital scarcity, and so I’ve made the decision to reallocate my public crypto portfolio to reflect a possible upcoming pivot in the crypto trends toward more hard assets.

My copiers on the trading network, which are now more than 400 strong, have been updated with this note to investors. Also, I’ve attempted to explain the possible upcoming shift using technical analysis on a different social network here.

It’s certainly a risk to be taking, and most traders would rather let the market take the shift rather than trying to front run it, but with bitcoin’s strong surge above $10,000 today, I feel this is probably the correct move.