It’s been nearly half a year since Italy first imposed a full lockdown on their citizens, and most of the rest of the world soon followed.

The lockdowns proved extremely effective at combating the spread of the virus but also came with a heavy cost. The impact these measures had, however, became completely useless after the restrictions ceased.

It’s 48 days until the next U.S. presidential election. Similar to the lockdown measures, a U.S. president is only effective while they are in power, thanks in part due to a rapidly expanding partisan division in the nation’s politics.

The system is a bit silly if you ask me, but understanding it is critical when trying to forecast how the global economy will perform over the next few years.

Stimulus measures thus far have been abundant, but it’s time to come clean and understand that we’re not likely to see this level sustained. What’s done is done.

Most central banks are now exhausted from printing, and to the best of my knowledge, few to none are considering further shock-and-awe campaigns. Meanwhile, the second wave of the coronavirus is making some countries nervous.

Here in Israel, a new, full lockdown is likely to be imposed by the end of the week, a move that is already known to be a killer of small businesses.

In the U.S., we may see further stimulus before the elections, or we may not. Either way, now that the lockdown measures and the stimulus have eased, life is getting even more difficult for many millions of people across the world.

This is really the time to have a strong stomach, because it does seem like things have a potential to get worse before they get better. One way or another, they will improve.

I’m really sorry to be such a downer today. Fortunately, the stock markets are actually performing quite well, as are most currencies, commodities, and even crypto as the U.S. dollar continues to test various levels of support across different asset classes.

Perhaps the most obvious of these is the Japanese yen, which has been gaining ground against the dollar rather steadily for more than three years. Today’s 0.5% movement may not appear very significant on this long-term graph, but let me assure you that it rather encapsulates what’s happening in all markets in the short-term. 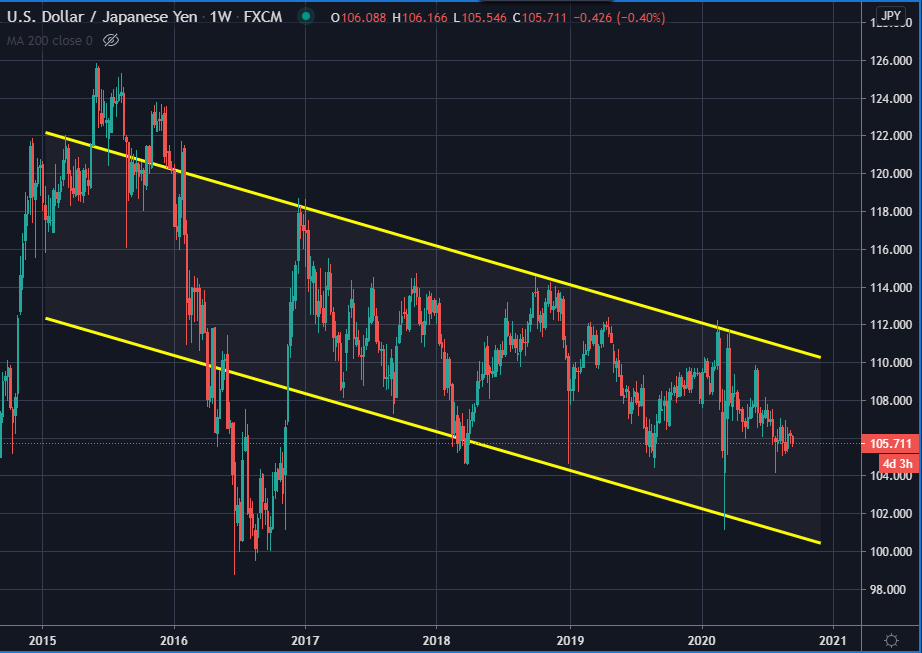 We’d like to wish a lot of success to Yoshihide Suga, who was confirmed this morning to replace Shinzo Abe as the prime minster of Japan.

Abe recently announced his resignation due to a mysterious illness, after being the country’s longest-serving prime minister. Suga is currently seen as the most stable option to carry out his former prime minister’s directive, despite having rather opposing personal politics.

So perhaps there’s some reason the yen, in particular, is gaining confidence today, and it’s probably just a coincidence that it coincides with the multi-year trend.

In conclusion, the movements of the U.S. dollar relative to the Japanese yen, a pair known fondly to forex traders as The Sushi, are really a reflection of what’s happening in the rest of the global economy.

We’re going through a rather uncertain transition right now, but all will be clear in due course. Different parts of the economy are progressing at varying paces. Mati Greenspan Click to tweet

Entire industries are downsizing and some are even disappearing, while other industries are becoming more productive now than ever before as the pandemic has accelerated many trends that were already present but have now become supercharged.

Long-term investors quite obviously feel that everything will soon get better, and this breeds confidence in the markets. When I look around right now at the global landscape, all I see is potential.