There’s no doubt that whatever is going on in the fascinating world of Decentralized Finance (#DeFi) right now, it has been stretched far past its limitations. But that’s ok, because the entire point of this exercise was to test the boundaries of programmable money.

Yet another delicious sounding product has joined the ranks of Yams, Tacos, Spaghetti, Porkchop, Tendies and Cake. This new one is actually a fork of Sushi and is named after the popular South Korean dish, Kimchi. I know, right?! 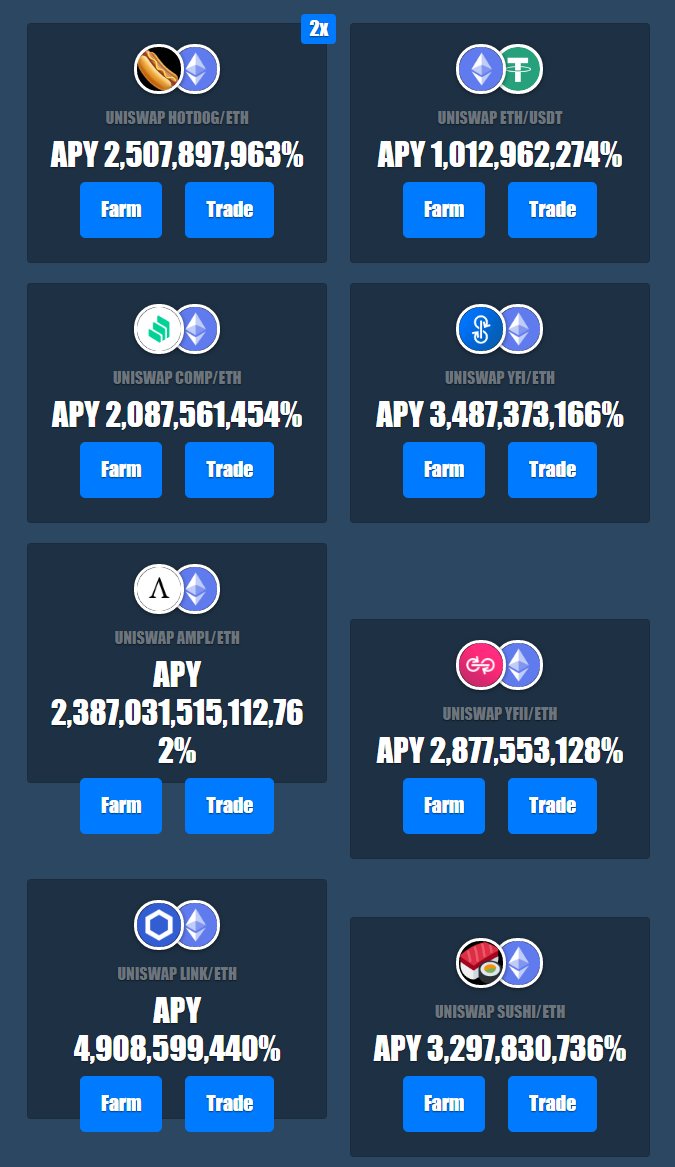 Yup, that’s right. According to this screen cap, lending these guys your hard-earned digital currency can net you billions of percent in annual interest.

Those of you who are quick at math have no doubt already figured out that farming $1,000 worth of the Link/ETH pair will net you $5.7 million every hour, or not. …

With great returns, come great risk. It should be noted that just like Yam before it, Kimchi’s code is still unaudited, meaning that the code could very well have bugs in it. In fact, I might have found one bug already.

In any case, for those of you brave enough to tinker, participation doesn’t come cheap.

We’ve already seen reports of people paying $400 or more for a single transaction on the Ethereum blockchain (where all this is being built) just to get in on some of these DeFi smart contracts.

Of course, that’s really the high-end transaction cost. According to bitinfocharts.com, the average fee is only around $13.23.

The analysts on my team have given several explanations for the discrepancy, but this stuff is pretty technical, so I’ll leave them to explain on Twitter where I can comfortably retweet without risking botching the explanation.

Whatever the case may be, DeFi is growing very fast, and the entirety of the traditional finance world is watching the space very closely.

Other than just your average volatility, there are two things that we can point to that may have contributed to the selling.

First is a stronger buck. The U.S. dollar has bounced off her lows again today. Commodities like gold, silver, and crude oil fell too, but the stock market seems to have remained impervious.

Not too surprising, considering that stocks are on a friggen tear.

Here we can see the U.S. dollar and the U.S. stock market in green and blue, respectively, while gold and bitcoin come down. The entire dollar swing started right around the time of yesterday’s opening bell on Wall Street (dotted red line). 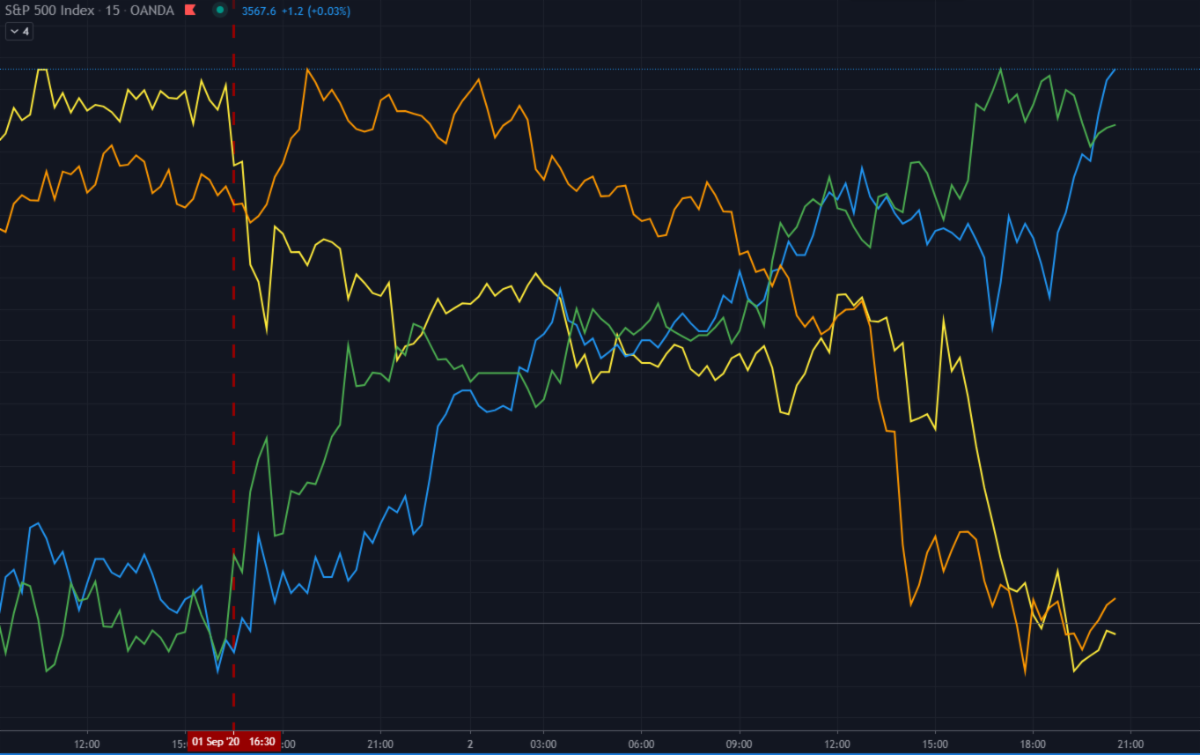 The other thing that may have galvanized the movement was the fact that South Korea’s most popular exchange, Bithumb, was raided by the police today.

Upon careful inspection, however, we can see that even though the headline itself may have caused a few people to sell their coins, there really isn’t any profound fundamental reason that this raid should cause any selling pressure whatsoever.

Bithumb might be in a bit of trouble, or not, depending on the outcome, but their clients funds are SAFU.

As far as ether goes, it’s all two steps forward and one step back. After reaching a fresh high of $489, we were due for a pullback, and that’s exactly what we got. According to the graph, there is now hard support at exactly $420. 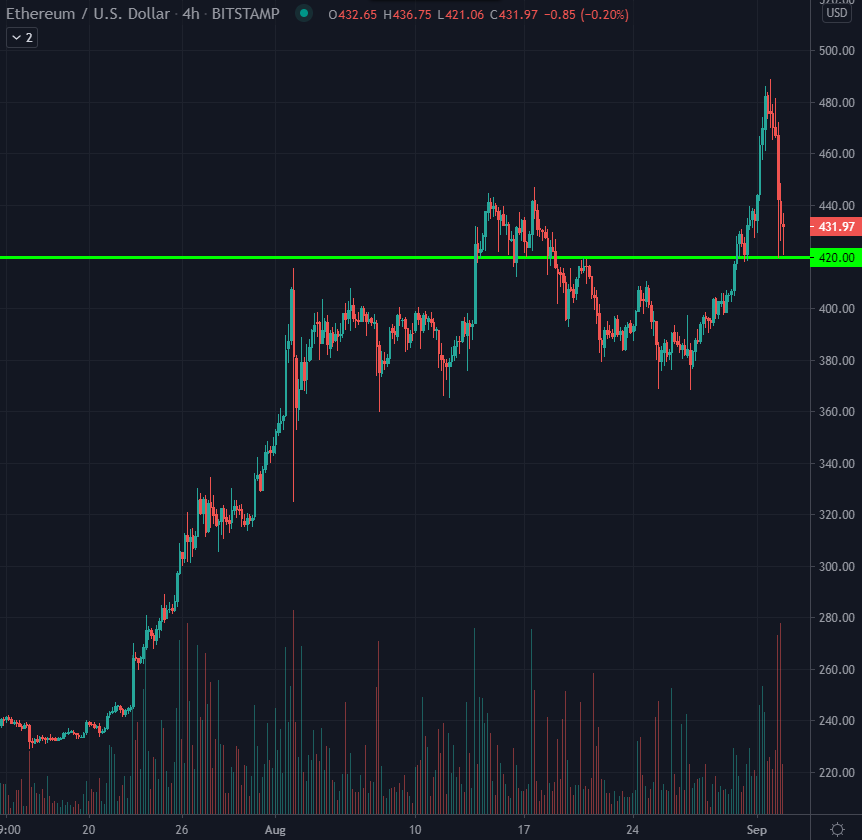 For bitcoin however, we’re seeing a lot more stability in the price, and rather than an upward climb, we can see that a range has developed between a little over $11,000 and about $12,000. As far as trading ranges go, this one is pretty well defined. 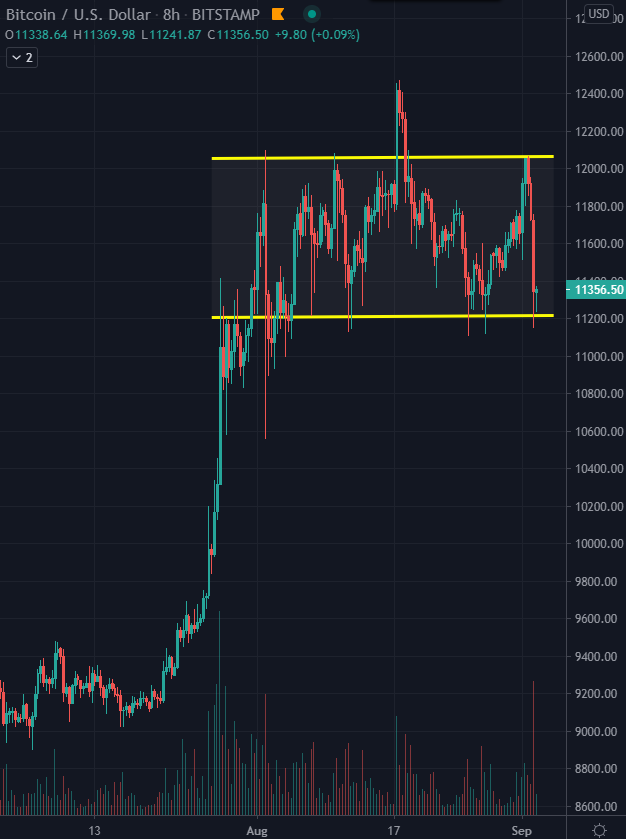 Usually, when we get a range like this, the idea is to buy the bottom and sell the top. So when it gets higher up, we close a few positions, and near the bottom we add some. That is unless we see a breakout, in which case all bets are off.