The hope of securing an additional much-needed stimulus package has once again been delayed by a dysfunctional U.S. government.

Even the piddling amount of $916 billion cannot be pushed through a bickering Congress, to the chagrin of Treasury Secretary Steven Mnuchin.

In the European Union however, the European Central Bank is gearing up to unleash a monster. Well, it’s more like they are increasing the level of monstrosity, but you get the point. 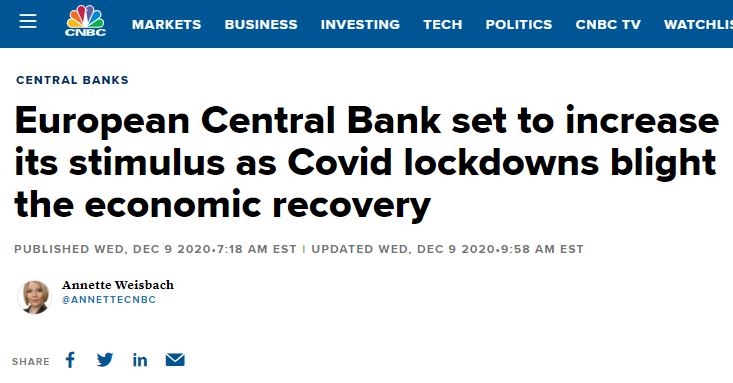 It took a while to figure out what the exact figures are. The CNBC article referenced above, as well as other similar articles, only mention that analysts expect an extension through December 2021 for a total increase of €600 billion.

However, it doesn’t mention what the current level of quantitative easing actually is at the moment.

So, according to their website, the ECB is currently expanding their balance sheet at a pace of about €30 billion per month.

If my math is correct, and I believe it is, an additional €600 billion over the next year works out to another €50 billion every month, for a total increase of roughly 166.67% over where they were at the height of QE at the beginning of 2017.

They are literally pushing the limits. … 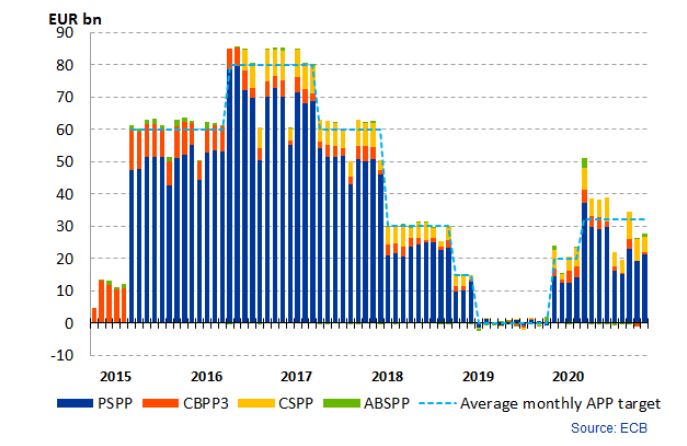 For reasons unknown, the ECB does not see the latest advancements toward vaccinations as a potentially stabilizing factor.

Further, their patsies at the Bank of International Settlements are on record as saying that “doing too much is better than doing too little.”

Of course, all this is in regards to monetary stimulus, the kind that is created by the central bank for domestic banks.

Fiscal stimulus, the kind that puts money in the hands of private citizens and small businesses, on the other hand, is in a similar situation to the U.S., and has basically been stalled. Mati Greenspan Click to tweet

Tomorrow, we’ll hear from Christine Lagarde, president of the ECB, likely confirming the above figures, or more.

Further, European heads of state will be meeting for a two-day economic summit where fiscal stimulus is likely to take center stage.

In short, the printer keeps creating more money in all the wrong places, to the great delight of investors everywhere.

It is a bit strange. With the clear expectation of increased QE in Europe and the Federal Reserve all spent since April, you’d think the value of the euro relative to the dollar would be sinking like a stone, but in fact the exchange rate has risen to its highest level since April 2018.

Here we can see the EURUSD since the great financial crisis. The last leg up over these past few weeks is almost enough to get me interested in currency trading again. 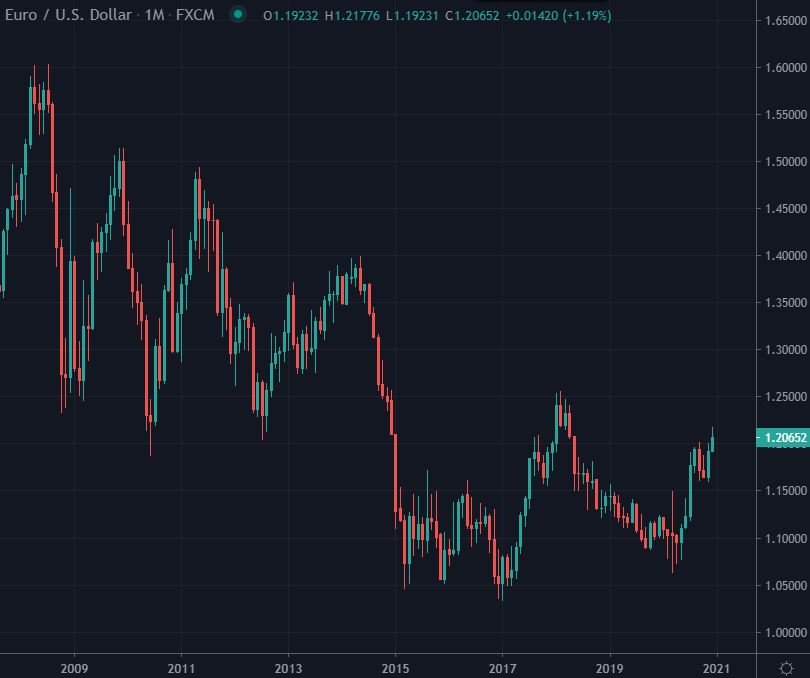 As we pointed out in Monday’s BMJ Newsletter (titled: Blindsided), in a world where all of the government currencies out there are falling fast, it’s a bit silly to speculate on which one, exactly, will fall the fastest.

However, it can be a good way to diversify your portfolio and drastically reduce risk, a fact I believe we failed to mention in that episode.

Wall Street is quickly realizing that having a minimal exposure to crypto assets can be very healthy for your overall portfolio.

Most crypto traders, on the other hand, have yet to learn the value of diversification.

Unfortunately, that’s about all I got for today, and it’s getting a bit late, so we better hit the send button before everyone goes to bed.

If you’re still craving more information, Messari Crypto just put out a full 134 page thesis for the crypto outlook in 2021, which I’m personally looking forward to falling asleep to tonight. Too much is not enough. …