One thing that really bugs me as a father is hearing my kids fighting with each other, especially when what they’re fighting over is completely inconsequential or is in abundant supply.

They both want the same spot on an empty couch, or they both want to play with the exact same Barbie doll when there’s at least a dozen similar ones within arms’ reach.

Not sure exactly where I’m going with this, but it’s just something that I struggle with. Punishment and yelling don’t really seem to do much, and explaining to them logically that the fight is silly doesn’t seem to do much more than frustrate the children.

Kind of reminds me of the two-party system the United States has. Democrats and Republicans are now approaching a rather bitter election, and though it may seem like there’s a lot at stake, voters are still stuck with only two options.

Today was day one of the Republican National Convention. Word is we get another three speeches from President Donald Trump, and then we go into head-to-head debates. Unlike watching my kids fight, these sparring matches can be really entertaining, even if they are no less constructive.

So, what I like to tell my kids, and sometimes this works, is that when you do choose to fight, fight over things that matter.

Goes to show you

The rotation from bonds to stocks continues today. Stocks are green pretty much across the board, something to the tune of 1%, as the S&P 500 forges new all-time highs.

With most of the major earnings reports behind us and little in the way of economic data scheduled for release in the next few days, we can literally see volatility declining. 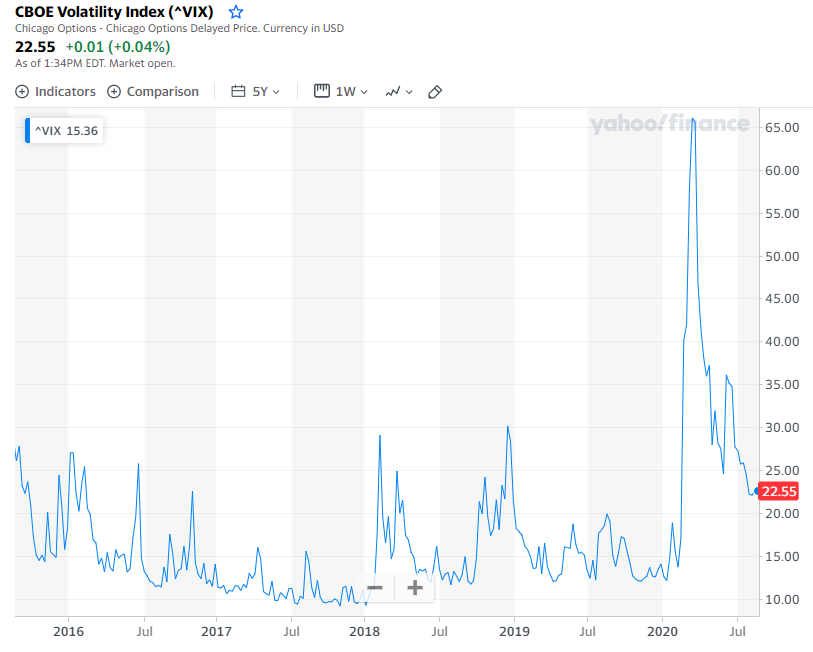 Notice that even though stocks have only been going in one direction, volatility is still not back to normal levels. In many places, it may seem like the world is ending.

Fires, floods, hurricane warnings and power outages are making headlines, but this turmoil doesn’t seem to be affecting the stock markets. I guess it just goes to show you that no matter how bad things seem at the moment, those with a longer-term outlook and a lower time preference seem to feel that everything will be just fine, which is a rather comforting thought right now.

See how it goes

Even gold and silver are falling today, and the store-of-value money cryptocurrencies are underperforming their decentralized web counterparts. So it’s quite clear that this aura of equanimity is being felt across all markets today.

Here’s a snapshot of gold so far this year. That 200 DMA line looks like a nice spot for support, and if we can get that low, I’ll definitely be a buyer, especially if we see some kind of vaccine or other progression that will shorten the pandemic. 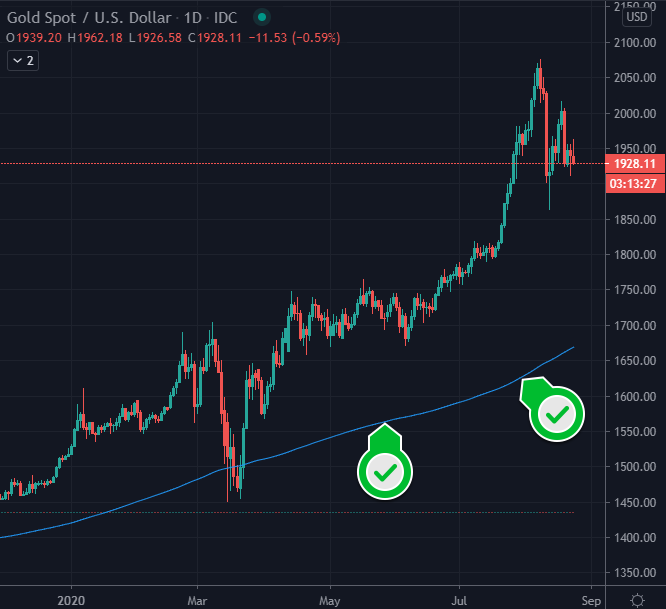 Not sure who I’m kidding though. I’m definitely not that patient. I will probably start scaling into a position anywhere below $1,850. Anyway, let’s see how it goes.