United we stand, divided we fall.

So goes the ancient saying commonly ascribed to the Greek storyteller Aesop in the prose. …

Today, the eurozone put together a landmark stimulus package which is being hailed by political analysts as nothing less than an historic milestone in European unity. CNN Business even used today’s deal as the cornerstone for this latest investment thesis. …

You know the impact is positive when despite the increased money printing, the single currency has surged today to its highest level since January 2019. That’s what we call confidence, baby.

Even though the headline number is only 750 billion euros, the fact that they managed to reach a deal which has been agreed upon by the heads of all 27 countries is pretty amazing.

It should be noted they’re not out of the woods just yet, and each head of state now needs to go home and pitch the plan to their own house of parliament. Especially in countries where parliamentary coalitions are thin, this will not be a very easy task.

Not featured in Google’s above blurb is the bitter end of the story when the oxen quarreled, and the lion ate them one by one.

Most Americans these days see the 50 states as a single land of freedom and liberty, and unlike the many countries of Europe, America’s union is centuries old. Yet, political affiliations and partisan issues are deeply dividing the country at this time, and that’s having a very real impact, not only on the politicians, but on life itself.

The current debate surrounding the efficacy of wearing face masks in public is a particularly baffling one. Last night I kind of lost it on Twitter when I discovered that a very large amount of my American followers are actually what are referred to as “No Maskers.”

I didn’t even know that was a thing. One of them kept calling me a donkey. It wasn’t until this morning when I finally realized that he was assuming that I vote democrat. … I don’t.

As far as politics go, I’m a libertarian, but still I think that the U.S. could benefit greatly from a government mandated mask policy. Does this sound shocking? I don’t think it is.

The government mandates seat belts while driving and helmets while riding a bike. Nobody seems to take issue with these policies, and they save lives every day.

It was only after I posted a tweetstorm containing 14 independent studies done by professional researchers in the medical field, all coming to the same conclusion, did the responses ebb. 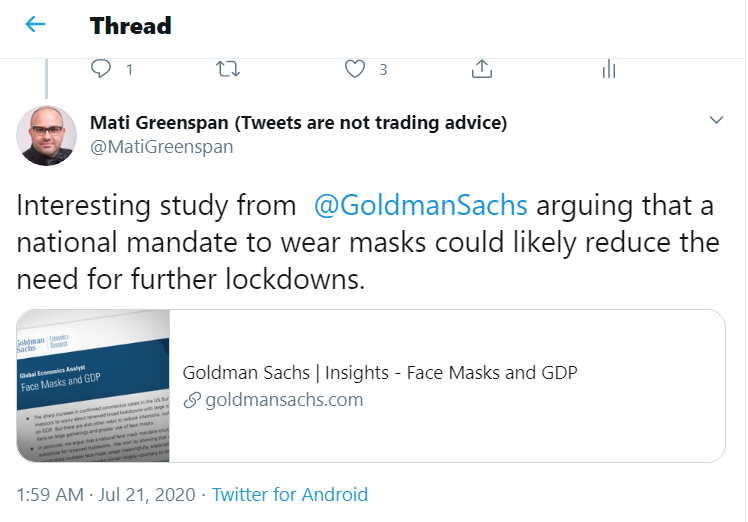 Masks aside, the provisions for the stimulus outlined in the CARES act will lapse at the end of this week. The U.S. government is working frantically to put a deal together that they’re dubbing “the fourth package,” but the parties are still quite far apart.

The president has mentioned that he would like to see some sort of payroll tax holiday inside the bill, something that not even the Congressional Republicans seem interested in.

Mitch McConnell, the leader of the Senate Republicans, is vying for easements of corporate liabilities to make it harder for workers to sue their employers over corona cases.

Chuck Schumer, who leads the Democrats in the Senate, says that McConnell is “out of touch with reality.”

So clearly enough, there are hurdles ahead. The market, however, is completely ignoring these hurdles for now. …

Stocks are up today. They are not up by a huge amount, but they are certainly up. Yesterday’s performance was simply outstanding, with Amazon rising about 8% and Tesla exceeding 10% gains.

The stock continued surging after hours, as SpaceX launched another rocket into space. I’m not sure if most of Elon’s fanboys understand that SpaceX launches don’t actually benefit Tesla shareholders in any way.

Yes, the company did carry a Tesla car through the stratosphere, but that isn’t really a reason for stocks to moon.

Bitcoin made a move this morning, snapping nearly a month of low volatility. It wasn’t a huge move, but it was in the upward direction, and it did break a level of temporary resistance that traders were watching.

The move in bitcoin, as well as the continued excitement in tech stocks, has set some of the key altcoins onto another leg higher. Mati Greenspan Click to tweet

This market definitely seems unstoppable. The feeling is that if all traders band together and everyone buys, valuations can only go higher. The lion cannot get us, for united we stand.

This kind of situation is pretty rare, so let’s hope it continues for as long as possible, and let us not quarrel, because we all know how that can end.