One of the defining hallmarks of President Donald Trump’s term so far has been the controversial protectionist stance the U.S. has taken with China. Today, that’s moved to a new level. …

Pulling a consulate is not very uncommon these days, but it does represent a significant escalation in tensions between the two countries. It’s also a clear sign that the issues are a lot bigger than just trade deficits.

Personally, I would much prefer to hear world leaders condemning China for the current genocide of Uyghur Muslims. Still can’t get this drone footage showing people bound and blindfolded being boarded onto trains.
If the video is faked, it’d be nice to know, but if it is not, surely the world’s leaders must know about it. Either way, the silence is deafening.

In any case, just like the mainstream media’s attitude toward the Uyghurs, the stock market seems completely apathetic to the tensions between the world’s two largest economies. After all, this is corona-time, when fear and greed are on overdrive.

Speaking of fear and greed, both Tesla and Microsoft will report their second quarter earnings after the bell tonight, along with a couple dozen other companies.

After Netflix’s disappointing earnings last week, it will be nice to get a better picture of how these mammoth companies are handling the pandemic. Earnings from the most-traded popular stocks will likely have an outsize impact on markets.

As we can see in this graph, the four largest companies by market capitalization in the United States are actually bigger than the entire Japanese market combined (red line).

Tesla isn’t quite there yet, but if it manages to somehow miraculously maintain its current growth trajectory, it won’t be too long. Tesla is increasingly being seen as a technology company rather than a car manufacturer, a perception that magically opens up new imaginary valuation methods.

Given the nature of the business it will be interesting to see if this is a sustainable model … pun intended.

We’re also keeping a sharp eye on the recent deterioration of the U.S. dollar, and with it the rise in gold, silver, and even crude oil, all of which seem to be benefiting from the weaker greenback.

Silver, in particular, has profited from this, blasting through the resistance at $20 and rising more 6% today to over $22.75 an ounce. 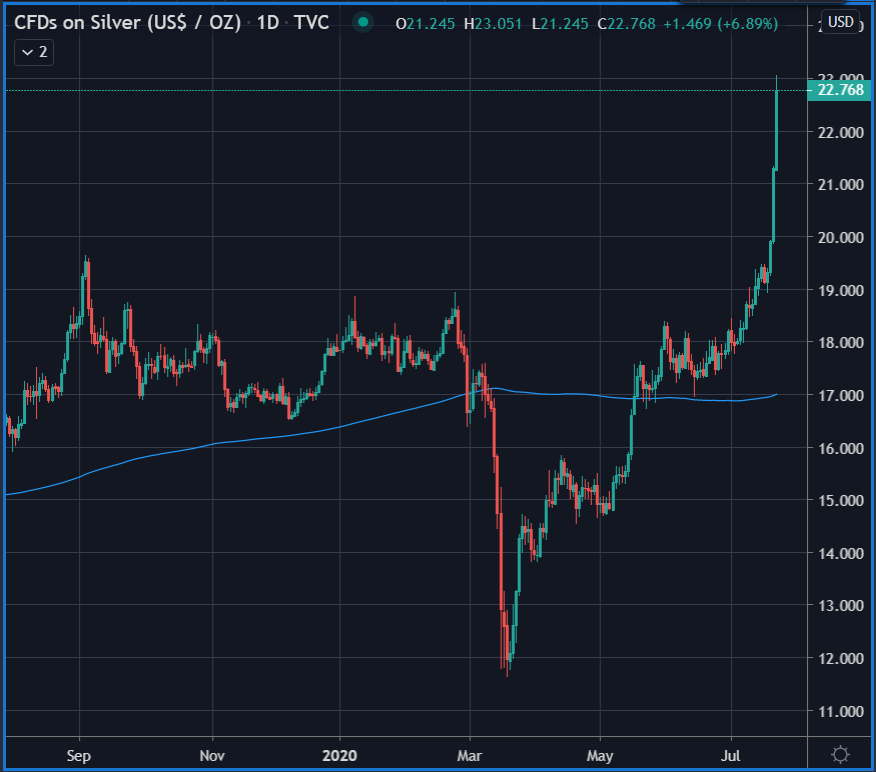 Unrelated and yet related, we also have news that. …

Trump’s nominee, Judy Shelton, has long been an advocate of the gold standard and hard money, and it will be nice to see whether the Senate will confirm her for a seat on the Federal Reserve. Mati Greenspan Click to tweet

However, even if she does end up clinching the nomination, it won’t necessarily change much. Remember, previous Fed Chairman Ben Bernanke, the father of quantitative easing, was also a gold bug before he took up the post.

Consider this passage from a speech made by Helicopter Ben in November 2002. …

“What has this got to do with monetary policy? Like gold, U.S. dollars have value only to the extent that they are strictly limited in supply. But the U.S. government has a technology, called a printing press (or, today, its electronic equivalent), that allows it to produce as many U.S. dollars as it wishes at essentially no cost.”

“By increasing the number of U.S. dollars in circulation, or even by credibly threatening to do so, the U.S. government can also reduce the value of a dollar in terms of goods and services, which is equivalent to raising the prices in dollars of those goods and services.”

“We conclude that, under a paper-money system, a determined government can always generate higher spending and hence positive inflation.”

Ironically enough, Bernanke spent the rest of his career attempting to fight inflation by printing dollars, a practice that was continued by his two successors.