Few things are more fun than a revolving door. We’re not just talking about killing time with your kids in a hotel lobby either.

Rather, we’re talking about people who make millions by lobbying the government after previously working in an official position.

Most of us will likely recall the famous pool scene from The Big Short, when an apparent bimbo, who was working for the U.S. Securities and Exchange Commission (SEC), attended the Las Vegas party in a blatant attempt to gain employment at the big Wall Street firms.

Though I won’t complain about the latest revolving door incident affecting the crypto market, it does highlight how some people have no moral compass. 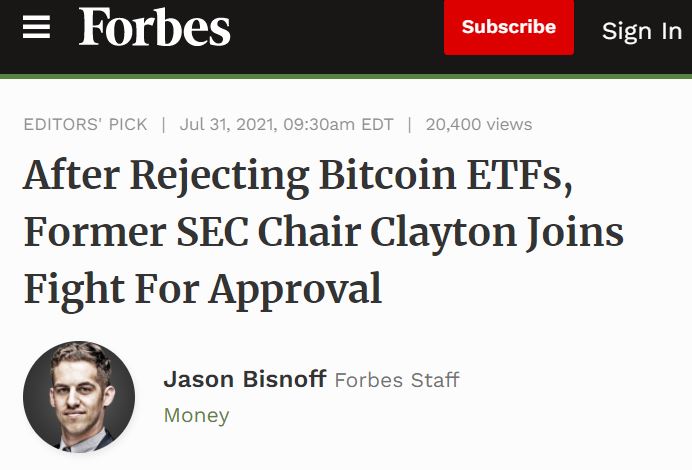 At this link, we can see former SEC Chair Jay Clayton’s profile on the advisory council of One River Asset Management, where he’s been since March 2021, just three months after quitting the government watchdog.

Two months later, the firm announced their filing for a carbon-neutral bitcoin exchange-traded fund (ETF). Obviously, it would be very difficult to prove any sort of conflict of interest on Clayton’s infamous last day in office, when the SEC took legal action against Ripple Labs.

Clearly enough, nothing here is new. We already know that anyone who holds a coveted position in public office will likely find it very easy to make a killing in the private sector.

In Clayton’s case, I often wondered who would hire him, given his subpar performance as a politician.

Never in my wildest dreams did I imagine him as a lobbyist in favor of bitcoin institutionalization. What a strange world.

We’re now halfway through earnings season on Wall Street, as all publicly traded companies report to investors how well they did in the second quarter of 2021.

Despite the GDP numbers coming in below expectations and the housing market boom that completely collapsed, both of which I managed to highlight on our CoinDesk interview last Thursday, corporate profits at this time are figuratively through the roof.

According to the article, earnings are up a total of 86% over the last year, which is the biggest jump since fourth quarter 2009.

I suppose that makes perfect sense, as in both periods, we’re calculating from the depths of the lows and measuring the full recovery from the bottom.

Also in both cases, we’re looking at a period of unprecedented central bank money printing.

Yesterday didn’t really feel like a record high volume day for bitcoin, but as far as the on-chain data is concerned, yesterday was the second-largest day on record with a total $69.69 billion worth of value flowing through the global payment system. 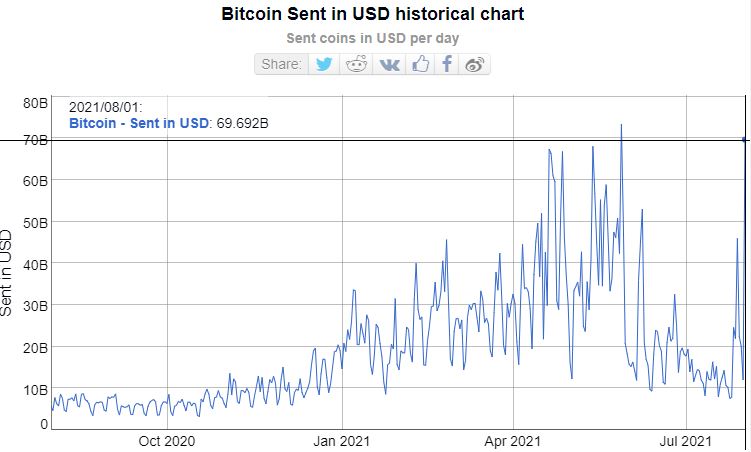 The weird thing, however, is that the high on-chain volumes seem to be completely disconnected from the rest of the market.

Exchange volumes, as measured by Messari crypto, have been completely lackluster over the last six trading days, and the mempool is completely empty.

What’s even stranger is that the number of transactions on the blockchain yesterday was well below average, and the number of unique addresses used was the lowest it’s been since 2016!

This is clearly some very strange and yet to be explained whale activity. I’m sure there’s a perfectly valid explanation for it, but due to the pseudonymous nature of bitcoin’s blockchain data, it could take a long time to figure out what the pods are up to, that is if we ever learn the true story.