We’ve been seeing new hockey stick graphs every day lately and today is no exception. The weekly jobless data just came out from the U.S. and the numbers were even worse than any analysts had guessed.

This chart shows the number of Americans who filed for unemployment for the first time last week. Notice that the number is almost exactly double the average analyst forecast (gold bar).

In total for the last two weeks, that makes nearly 10 million people out of work due to the virus fears. That’s about 3% of the total U.S. population and more than the entire population of Hungary.

Tomorrow, the U.S. will release their monthly jobs report including the unemployment rate, which in the month of February reached its lowest level in about 50 years. This number is going to jump tomorrow, but by how much?

Logic would dictate that if it was 3.5% in February and we have another 3% unemployed, then we should see 6.5% for March. However, the official unemployment rate known as U-3 only calculates the percentage of people eligible for employment and not the entire population. As the eligible workforce in America has consistently been less than half the total population over the last few years, the calculation should be 3.5% plus approximately 6% or 7%.

Thus, the unemployment rate in the USA could go from it’s lowest level in 50 years to it’s highest level in 80 years in a single moment when the data comes out tomorrow.

Things are happening really fast in the oil market right now. Of all the commodities affected by the virus, oil takes the cake. The sudden drop in demand due to lack of air and ground travel is devastating what is usually a very strong and stable industry.

As we reported in previous QE Newsletters, The Russian Federation and the Kingdom of Saudi Arabia have been involved in a bitter spat, with each country pumping as much as they can in order to drive the price down and increase their market share.

In the meantime, the U.S. has been feeling a lot of pain as well. Thanks to new fracking technologies, the country has very recently become energy independent, something that they’d very much like to maintain. The thought of having to ship oil from the Middle East again is extremely unnerving to the Yanks in particular.

U.S. President Donald Trump has been toying with the idea of intervention over the last few days but until now, nothing too concrete. Well, the president’s full hand is now on display.

This single tweet has had a fairly sizable impact on the price of oil and may well have set the floor at $20 per barrel. If Trump, Putin, and MBS can all agree on very deep production cuts it could very well begin to reverse the massive glut and at the very least end the price war. World leaders have been actively intervening in the oil market for decades quite effectively. More cooperation usually means price goes up, and vice versa. 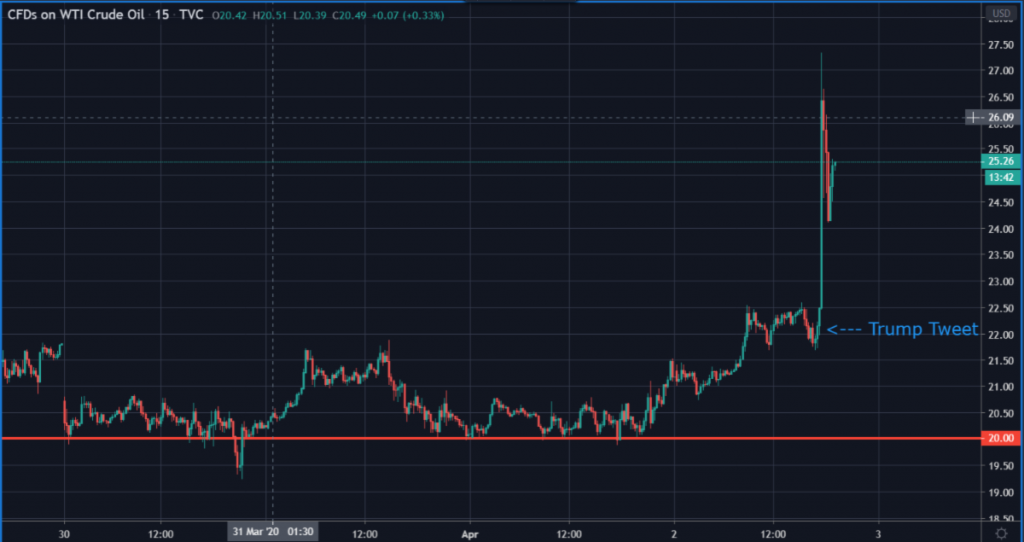 Tomorrow, Trump will hold a large meeting with all the biggest US producers to discuss the issue. No doubt he’ll get a good gauge of how much pain their willing to take. Putin has also called for action yesterday. As well, the KSA has called for an emergency meeting of OPEC plus. We could well get a comprehensive compromise within a week.

Meanwhile, this morning, even before all of the above happened, China put in a large bid for a massive amount of oil to refill their reserves. Can always count on the Chinese to get the best possible deal. They’re like the Warren Buffetts of the commodities market.

Gold, silver, the stock markets, and the digital assets market are all doing fairly well today. It seems as if the massive cash hoarding phase may finally be over and investors are ready to put their money back to work.

Bitcoin is up nearly 10% over the last 24 hours and is regaining a lot of its dominance over the rest of the crypto market. Mati Greenspan Click to tweet

At this point, only Tezos is doing better. For BTC though, the next point of resistance is quite clearly at $7,000 per coin (dotted yellow line). We may well get a test of the rising support (orange) before attempting to cross it, but a lack of such a test would be pretty bullish. 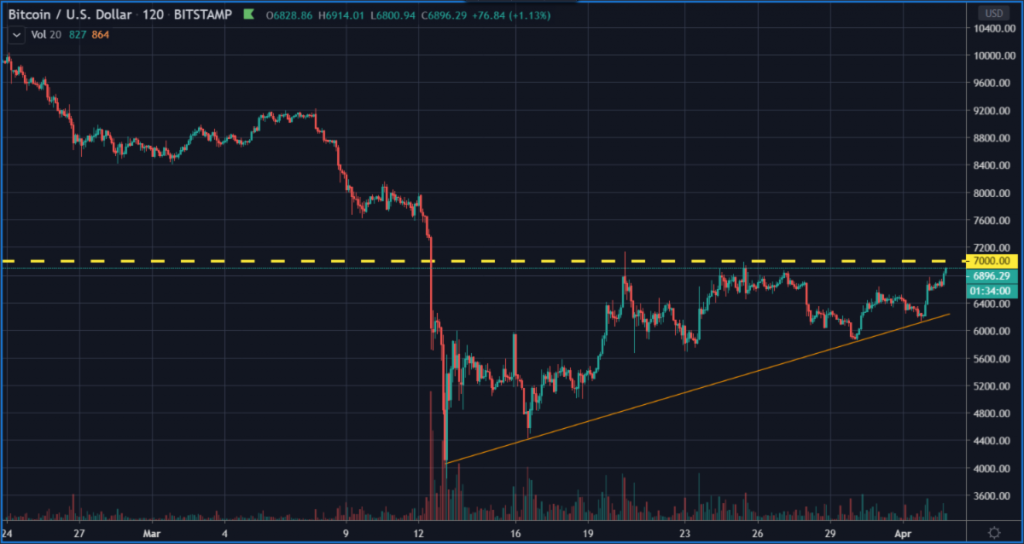