Ever since the halvening event, Bitcoin has been running slowly and it’s starting to cost users.

This is something we’ve discussed in prior articles at length, but I wanted to use it here to pivot the conversation to a more productive tone. Craig Steven Wright is a liar and a fraud.

Or, so claims a message encoded into the blockchain over the weekend, signed 147 times using keys that CSW claimed ownership of in court. The full message reads as follows… 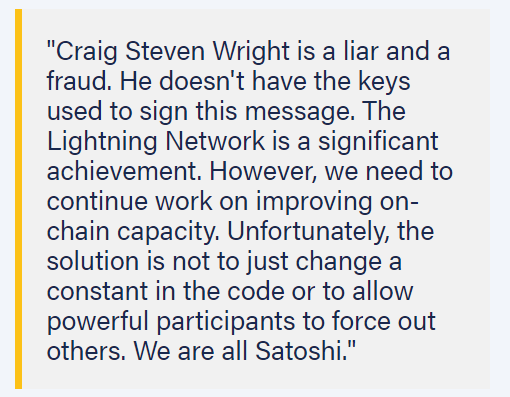 The fact that he’s a fraud is certainly not surprising. The evidence against him has been piling up for a while now. What’s more interesting is who wrote this message? And why now?

Is this Satoshi Nakamoto?

While I don’t know the answers to these questions, what we do know is that whoever it was is alive and certainly has some strong opinions about how to fix the Bitcoin network.

Debates about how to upgrade this network have been raging ever since I got into bitcoin in 2013, and these have led to multiple fractures in the crypto community and more than a few forks of the digital currency.

Whoever it is, it’s quite comforting to know that they’re still looking out for the growth of the network after all this time. Even though they may well have access to so much bitcoin, that even the thought of those coins coming back into circulation is causing tremors in the market, they’re still willing to speak up for what’s right in the interest of moving forward.

We are all Satoshi.

Stock markets are up again. As per the normal, financial media are split between calling this “optimism over a vaccination” and “optimism on re-opening the economy.” Of course, the real reason is “optimism on the Fed printing an unlimited amount of money in order to protect investors from falling prices.”

Over in Europe today, we’re seeing fresh signs of nationalization…

Should the European Commission agree, this will be a huge step back from German principals that led to fully privatizing their largest airline carrier back in the 1990s. Their competitors, namely Ryanair, are pissed and will likely sue. But what else can they do at this point, it’s either go national or go flightless at this point. Certainly a sign of the Corona-times.

Who is Playing Bitcoin?

As mentioned above, the Bitcoin network has been running a bit sluggishly lately. The long weekend did however do it some good, as the reduced number of transactions gave the miners a good chance to clear out the backlog a bit.

Here’s a snapshot of the mempool since the halvening. As you can see, the level of unconfirmed transactions has come down nicely since Friday, but is still a bit elevated.

Blocks are now being churned out approximately every 12 minutes, meaning that bitcoin is running about 20% slower than normal. Mati Greenspan Click to tweet

In addition, it could well stay this way until the next difficulty adjustment. Fees have also come down somewhat, but are still quite high at $3.30 per transaction.

Looking more broadly, we can see the impact that Memorial Day weekend has had on volumes at the popular crypto exchanges by checking Messari Data, which not only shows a historic price graph, but also has committed to showing much more accurate exchange volume data (cleaning out the wash trading).

Notice the big spike in mid-March during the height of the multi-asset Corona sell-off. May’s volumes have been elevated, but this weekend has seen things muted.

To me, this is very telling of exactly who has been driving the bitcoin market lately. Back in 2017, when it was retail investors running the show, it was very common to see large surges in volume during the weekends, because that’s when people were off work and had time to trade.

Now that institutional players have stepped up their game, and their volumes, weekend trading is likely to fade out again.