With every new day of Corona madness comes something new that completely changes the way we view the world, and the markets.

Today’s shock and awe news comes directly from the legendary investor, the Oracle of Omaha, none other than Warren Buffett himself, who told us…

Surely, Warren is aware of the knock-on effect that his actions have, not just on the airline sector, but on the fragile psyche of the entire financial market. A fact that only makes this action all that much harder to swallow.

Watching his call with CNBC was simply mind-blowing and certainly a sign of the times. It seems the Oracle feels that the airline business has “changed fundamentally,” meaning he feels the current pandemic will have a lasting impact on people’s habits. Though I personally feel like people are going to want to put this all behind us quicker than expected, a recent FinTwit poll is indicating that people are not quite as eager to fly as myself. 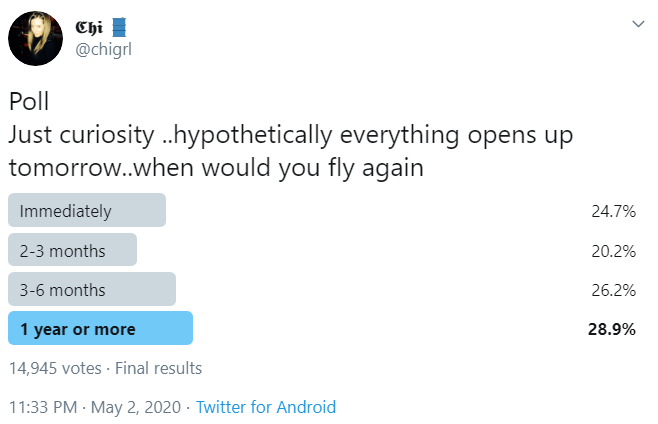 Forget about that though. The real kick in the teeth for financial markets today is that many investors have been on the buy side lately in the hopes that the Fed will provide some critical downside protection and therefore minimize the risk. It seems Buffett isn’t buying into any of that nationalization BS. The value of the companies has gone down, so he’s liquidated them, even at a significant loss. It’s as simple as that.

As can be expected, Buffett’s airline liquidation does seem to be causing some negative price action in the stocks today, but not too much. Major U.S. indices are down just about 0.5% as of this writing, which doesn’t really scream pandemonium and mayhem.

But if we get our head out of the stocks for a second and look at the bigger picture, a very distinct risk-off atmosphere does seem to be developing. The U.S. Dollar index is up so far this week by nearly 1%, a fact that instantly brings back fresh memories of the great dollar surge of mid-March.

Also, the VIX Index is off the lows and on the ups once again. Here we can see the famous volatility index since the beginning of the crisis. As we can see, the month of May is starting out on an uptick. 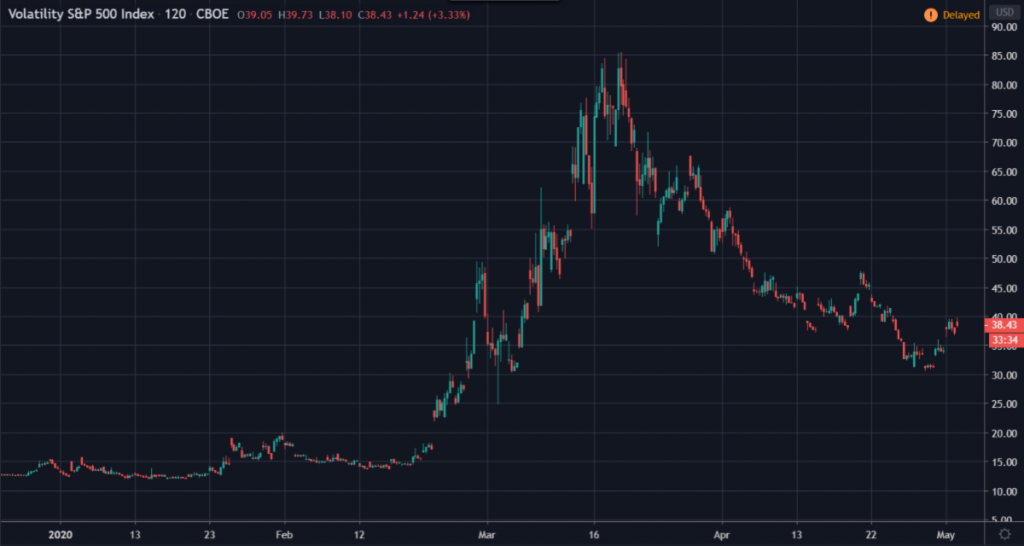 All in all, uncertainty remains at unprecedented levels, as it is likely to be for quite some time to come, or not, who knows?

A column by Barry Ritholtz published last Thursday does a great job of putting the massive job loss and enormity of the calamity into perspective. In Barry’s words, the stimulus is likely to continue but is merely a salve and not a long term solution. He feels that what’s really needed quite quickly after the lockdowns are lifted is something on the level of the moon landing, feel free to check out his suggestions here.

The bitcoin block half countdown timer now reads just seven days, and the price is holding up nicely for now. Mati Greenspan Click to tweet

Volumes across exchanges and on Wall Street are elevated at the moment, not as much as they were during last week’s pump, but still much higher than what we were seeing pre-virus.

The big question that many have been asking me lately is weather there will be some sort of sell-off immediately after the halving event.

The idea behind this is that mining operators may need to sell some of their stash in order to upgrade their hardware once the halving makes their old rigs unprofitable. While this is certainly a possibility, there’s really no guarantee of this. It’s quite feasible that many miners have already done their upgrading and therefore have no need to sell, or they’ve already sold much of their holdings during the highs around $10,000.

To help us visualize the profitability levels of the various mining rigs in the market today, we can use TradingView’s ‘Bitcoin ASIC Cost’ indicator, which shows at which levels each rig is currently making a profit. 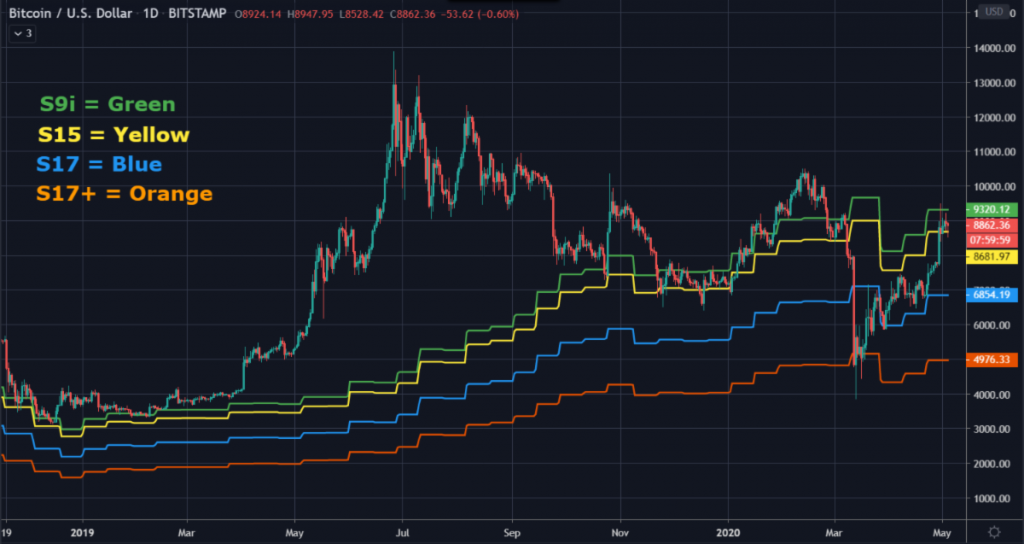 Now, I’m not an expert in Bitcoin mining hardware, but from what we can see here, it does seem as if most of the older models have been operating at a loss over the last two months and have only just returned to profitability.

More than likely, once the halving occurs, many of the older models will need to be shut down for good. The higher the price goes between now and then, the less the hashrate will drop. Still, it’s hard to imagine it rising to the level needed to avoid a major hash plunge. The following graph shows what level the price will need to reach in order to save those rigs after the halving event. 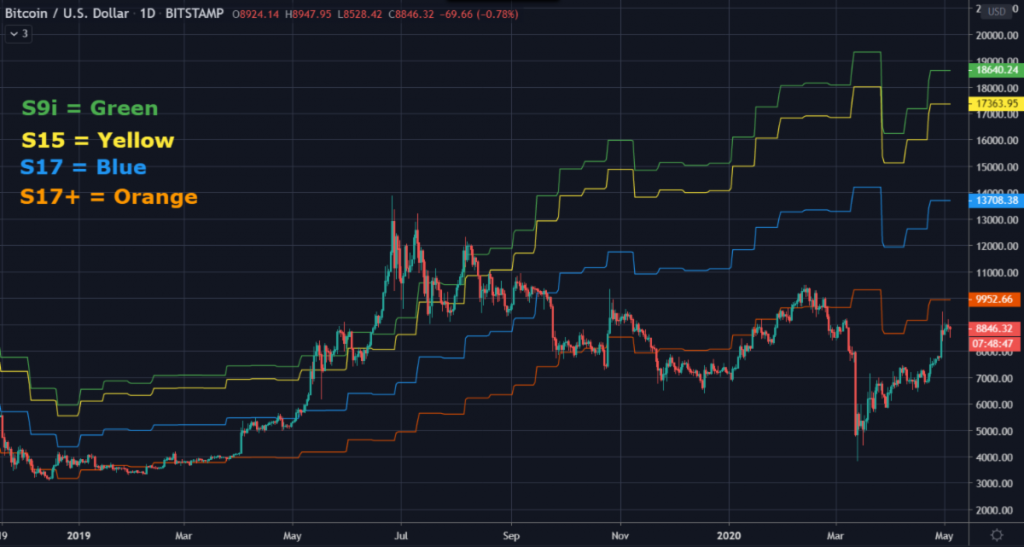 Now, once the event takes place and a lot of the old machines get mothballed, the hashrate will probably come down quite a bit and two weeks later, the difficulty will be adjusted lower so those colorful lines will all come down somewhat.

What I’m less sure about are the new rigs coming online and how powerful they are. In any case, anybody who says that the halving event is already priced in clearly hasn’t taken into account all of the ins and outs, the pros and cons of each individual player in this vibrant market. It could take months for this to play out and for the price to reflect the massive change in the ecosystem.