Inauguration day. Such hope. Such optimism. Such change…

Unlike his predecessor, President Joe Biden wasted no time between the elections and today, and he is completely prepared to hit the ground running.

His entire cabinet and key roles have already been nominated and are currently going through the congressional confirmation process. In addition, Biden is planning on signing no less than 15 executive orders this evening.

This sort of aggressive early agenda is nearly unprecedented in modern times, so anyone who thought that change might be gradual was gravely mistaken. He is certainly not living up to his nickname “sleepy Joe.”

The stock markets are also greeting the new president with a grand salute. The Nasdaq 100 index is leading the way, with nearly 2% gains in the first two trading hours.

The U.S. dollar, on the other hand, is perfectly flat. The currency markets don’t seem too eager to actualize the optimism into actual pricing.

The words uttered by former Federal Reserve Chair Janet Yellen yesterday leave much to ponder. Her statements on China revealing the political agenda of the administration she’s about to serve was also a stark reminder that we’re no longer dealing with the apolitical Fed chair that we once knew.

Yellen’s words on the U.S. dollar also rang clear. The statement that she would not deliberately debase the USD as a strategy to promote American exports is not surprising.

Just about every administration since that of former President Dwight D. Eisenhower has promoted a strong dollar. After all, the greenback is by far America’s greatest export.

Still, she made no mention, nor was it really asked, whether or not she might act to actually strengthen the buck. In the above statement, she merely mentioned that she wouldn’t push the dollar off a cliff, yet made no mention whether she might act to try and stop it from falling off by itself, or even being pushed for that matter.

Normally this might be interpreted as a good sign for bitcoin and the digital asset space, were it not for a different statement Yellen made specifically about cryptocurrencies. … 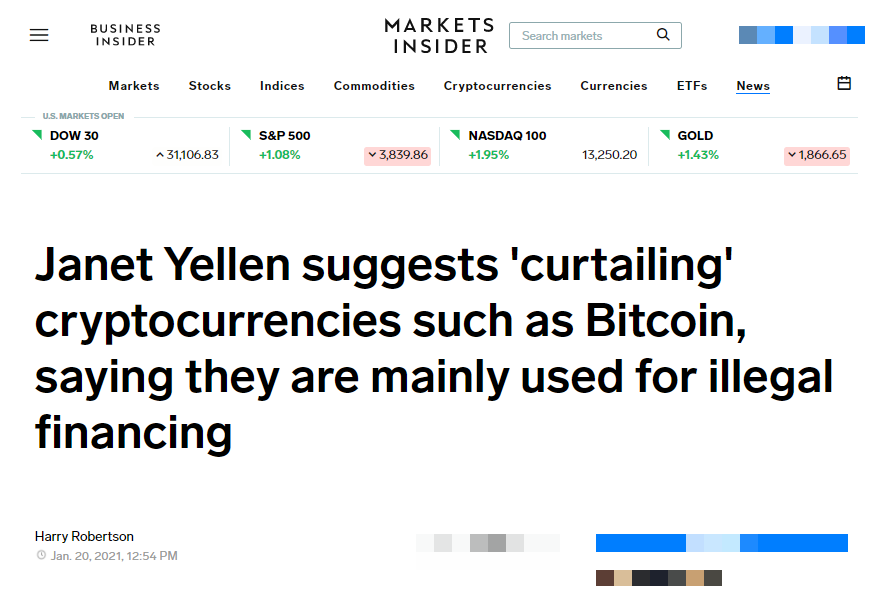 This isn’t a remarkably different stance than her predecessor, Treasury Secretary Steven Mnuchin, took. Mnuchin even tried pushing through sour crypto regulation at the very end of his term but, unlike Yellen, he didn’t have the backing of the U.S. House.

Even if former Commodity Futures Trading Commission Chairman Gary Gensler is a FinTech genius, Yellen will outrank him when it comes to legislation.

The crypto market is the only market on the planet right now not breathing a sigh of relief because of the new U.S. administration. Mati Greenspan Click to tweet

What’s more, the trend line that we managed to remain above for the last five weeks has now been clearly punctured.

The dotted yellow line here will be drawn slightly different by every chartist, but it would be a stretch for any to claim that it hasn’t been broken today, a fact made even more unnerving by the fact that the 200-Day Moving Average (blue line) is still below $16,000. As we know, past performance doesn’t indicate future results. For what it’s worth, I haven’t closed anything so far in my high-risk crypto-only portfolio. There are so many notable levels of support immediately below that it would prove difficult for even a large sell wall to penetrate them.