For the first time in a long time fear can be felt in the global markets. Over the weekend we’ve received some distressing news regarding the spread of the Coronavirus to more Western countries including Iran, Israel, and Italy.

If traders aren’t fearful of pandemic an even bigger nightmare of theirs seems to be materializing. Bernie Sanders is gaining steam in the Democratic party and now seems quite likely to be the one who’ll face Trump in November.

All this and we still haven’t heard a firm commitment from the Fed and papa Powell that everything will be fine. The current “not-QE” stimulus program is set to expire in April and we don’t have any promise of free money for the markets beyond that.

If traders managed to stay complacent last week, it’s gonna be very difficult for them to continue burying their heads in the sand now.

By this point, it’s probably reasonable to assume that China’s growth figures for the first quarter of the year will be dreadful but I’m not sure people really understand just how bad it is.

According to a recent survey, about 66% of small and medium size businesses say they will run out of cash in the next two months. That’s millions of companies and about 80% of the jobs in the country at stake. The graph shows the percentage of Chinese companies who think they will go under in the next X months. 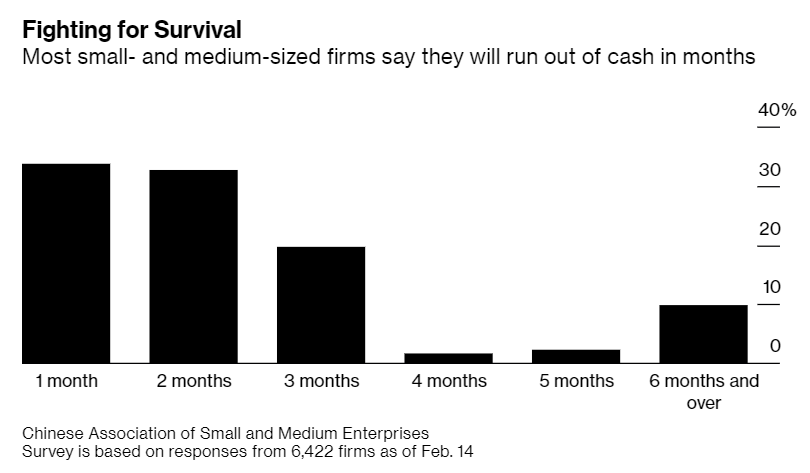 The situation might not have been so bad if the economy wasn’t already way overextended going into this. Months of trade war and years of economic stimulus have left the country ill-prepared and with few economic tools to weather this storm.

Many countries across Asia are already exposed beyond containment. Now we’re talking about possible spread in Europe as well. Markets have every right to be concerned. This is scary stuff.

Here we can see the gap down in the US stock markets (left) over the weekend and the gap up in gold (right). It’s extremely clear that investors are reducing risk as Wall Street prepares their day. 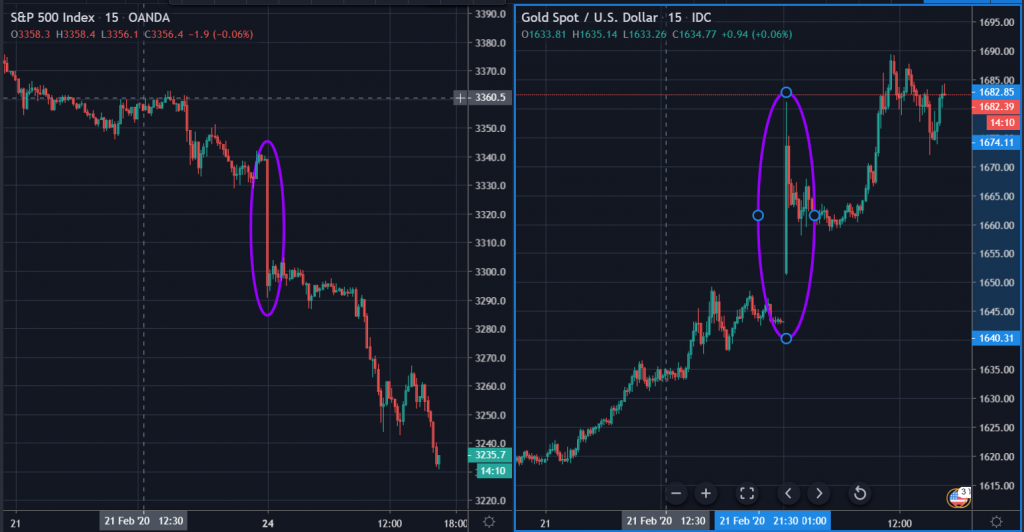 With investors being conditioned to buy the dip over the entire course of the last decade, it’s gonna be an exciting day today.

Is bitcoin a safe haven from Coronavirus?

This is one of the most comment questions I’ve been fielding since the start of the year and the answer is, I don’t know. Though my initial assessment was that the two have not been correlated thus far, it seems that we might soon reach the point where they’re more connected.

After continuing to hear the theory on social media, I put out a twitter poll this morning and the initial results are a bit surprising to me. Feel free to vote by clicking the image. Will be glad to get your opinion.

As far as correlation goes though, it’s pretty clear that even though gold has been more in-line with other markets lately, it remains quite separate. This graph from coinmetrics.io demonstrates that quite clearly. A strong correlation would have to be above 0.6 at the least but as you can see the daily correlation between gold and bitcoin is now at a high of under 0.15.

Even though there doesn’t seem to be very much logical reason that fears of a virus would cause people to buy bitcoin, other than the obvious… bitcoin doesn’t catch viruses… narratives can be quite powerful at times.

If enough people believe that fears push up the price, then that’s what could very well end up happening. Mati Greenspan Click to tweet

Or not. I guess we’ll have to wait and see.