Of all the Cinderella rags-to-riches tech stories we’ve seen since the turn of the century, none can hold a candle to the tale recently created by popular microchip maker Advanced Micro Devices, Inc.

AMD has seen their stock grow more than 4,000% in the last five years. That’s something that Facebook, Apple, Microsoft, Netflix, Google, or even Tesla cannot boast at this time. 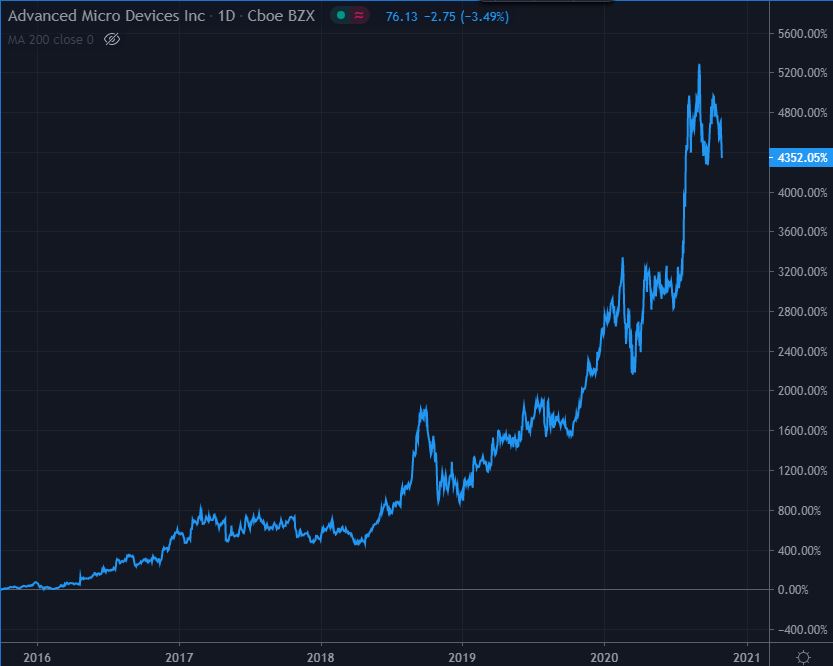 As far as earnings go, Q3 was strong. All in all, the company brought in $2.8 billion in revenues during the last three months, a record for the firm by far and nearly $1 billion more than their average quarter.

It seems that, unlike SAP, who we covered yesterday, the pandemic is working out favorably for many. Yet, the stock is dropping.

Sure, part of that could be due to the fact that the entire market is falling. The Nasdaq is tracking a 3% decline by the time of this writing (noon on Wall Street).

So even the tech sector is taking a hit, as this broad sell-off continues. Also, it should be rather easy to say that some investors might be about ready to take their profits after holding for so long.

Most pundits, however, seem to be attributing the fall to a different piece of news entirely. …

The move is certainly risky, especially for a company that’s worked so hard to consolidate their market share.

As is explained in this CNN video, it can take five years to create a new bit of technology, and doing so requires a fair bit of foresight to understand what the landscape will look like when your product gets to market.

This future of computing, as AMD CEO Dr. Lisa Su explains, lies in data processing. At the moment we know that many companies are relying on big data to make their decisions.

However, similar to how the brain works, modern computers simply lack the capacity to process this data, and by acquiring Xilinx, she feels that AMD will be well positioned to create that capacity.

For investors, the big question here is about Su. Since her appointment as CEO five years ago, she’s managed to bring the company from the brink of bankruptcy to one of the world’s best performing entities.

So, was that turnaround a stroke of luck or was it by design? More importantly, will this success be repeated into the next five years?

The U.S. elections and the global pandemic are being blamed for the losses, though in my mind we were about due for a correction anyway.

Across Western Europe, lockdown restrictions are set to go back to full capacity over the course of this week.

The idea is that a cleansing November has a good chance of bringing families together for the holiday season, or at least that’s how it’s being sold to citizens who are more than weary of continence and far less scared than they were in March.

According to World Health Organization data, cases are rising sharply again but the number of deaths attributed to COVID-19 remains consistent.

As far as the electoral polls are concerned, it does seem like Vice President Joe Biden has this one in the bag. However, the race is far from over, and uncertainty about the outcome will only grow over the next few days.

The possibility for a disputed outcome is as high as I’ve ever seen, and this is almost certainly a main contributing factor in the current market action.

Past that, it’s earnings season. Second-quarter earnings were less than helpful, and it seems that many companies are still using the pandemic as an excuse to deliver opaque forecasts for their future growth, leaving investors to once again navigate blind.

In fact, instead of asking why volatility is so high, should we inquire as to why it’s so low?

Bitcoin and the gang deserve mad props for completely avoiding the first two days of the sell-off, but by today, it seems the pressure was too much, and they finally cracked.

What’s mostly been lost so far though is limited to the gains of yesterday. In charting, we call this an engulfing candle formation, and in addition to being incredibly confusing for traders (hangs head in shame), it’s generally seen as a bearish sign. 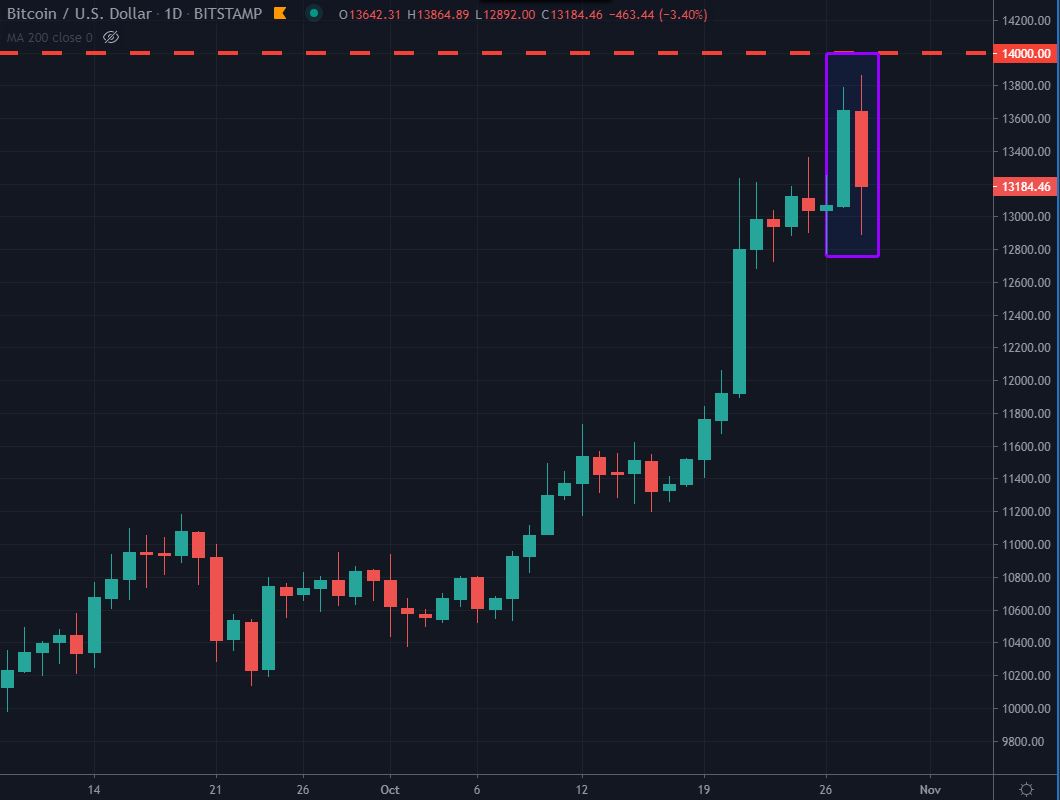 The one saving grace, from a technical perspective, is that we did get a bounce, so we’re unlikely to close below yesterday’s lows.

At any rate, $14,000 (red dotted line) is a huge psychological barrier, and I would be delightedly flabbergasted if we were able to pass through it without first seeing a significant pullback.

Well, we’ll see how it plays out.