With everything going on these last few weeks, it can get a bit difficult to know what’s driving the market’s euphoria.

Sure, there are always millions of factors at play when it comes to any globally traded market, but there is one dominant theme. Later this afternoon, we’ll see it boldly embodied on prime time international television for the entire world to see.

Apparently, President-elect Joe Biden is planning to introduce two new bills before the all-new Democratic-majority Congress, with one for rescue and another for recovery.

It will be interesting to see exactly how the money will be used to try and prop up the teetering U.S. economy but one thing is for certain. The vertical line on this graph showing the U.S. dollar money supply is about to get a lot taller. 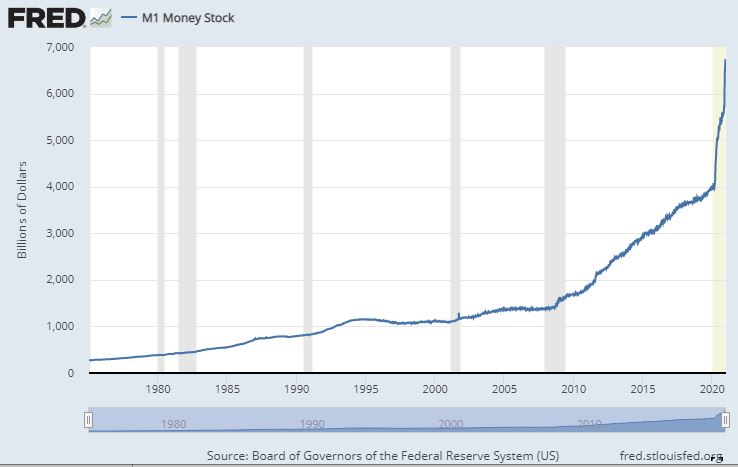 The effect that this new purported stimulus plan could have on the economy is of course unknown.

Ever since the 2008 financial crisis, world leaders have been running the largest economic experiment in history.

We’ve gone from quantitative easing to full-blown Modern Monetary Theory in just 10 years. Now they’re talking about rescue and recovery. To me, it seems a bit much, but at the same time, I am fully aware that this is likely just the beginning of it.

The immediate effect on the market is apparent enough. The Dow Jones Industrial Average was up nearly 0.5% at the start of the day, and judging from the bullish sentiment on social media, we should have a nice green trek into new all-time highs.

Gold didn’t seem to have much reaction to the news, but on the other hand, we’ve kind of known that this was going to happen for a while now.

It’s similar to how we know that this sort of action is very likely to damage the U.S. dollar in the long-term, so its apathy on this particular day is more than understandable.

What’s more interesting here are the long-term trends, which demonstrate the greenback has been falling both in purchasing power and against other fiat currencies.

In the meantime, we see bitcoin rising again today, gaining confidence in light of the recent pullback. The simultaneous fall of the USD and a monstrous bitcoin rally will probably make sense to most of our dear readers, but you should know that the inverse correlation between the world’s most prominent digital currency and the dollar is now at historical levels.

This graph from Coinmetrics shows this correlation over the last several years. As you can see, we chose the Spearman calculation on the longest available timeframe of 360 days. 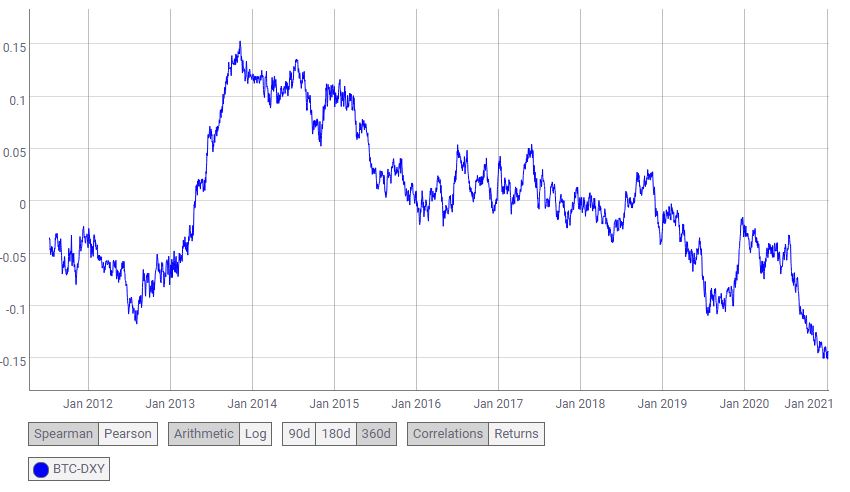 A reading of -0.15 doesn’t represent a particularly tight correlation, but that makes sense, since the volatility of bitcoin is so much greater. While 5% rise of fall would represent a normal daily move for bitcoin, it would be a rare event for the U.S. dollar. The trend on this chart, however, is rather undeniable, and it speaks clearly to the atmosphere of today’s market.

Win some lose some

Over the last few days, we’ve certainly had many updates from world leaders regarding regulation of bitcoin and digital assets. Some of it has been positive, some of it has been negative. Mati Greenspan Click to tweet

It can be very difficult to keep on top of this stuff sometimes.

The most notable, of course, was a rather defensive statement from European Central Bank President Christine Lagarde.

Lagarde is highly regarded as a digital asset friendly figure but she’s never been fond of bitcoin itself. The ridiculous statements she made are almost as bad as the lighting in her office.

The most important update, in my opinion, though we still don’t have any official word, is the rumor that Acting Comptroller of the Currency Brian Brooks may be handing in his resignation in the next few days due to the changing administration.

Even if he doesn’t resign, it seems unlikely at this point that he’d be able to keep his job, but rumors like these take even those tiny chances down to nil.

This will be a great loss for the future of crypto regulation in the United States. Even the great work that he’s done over the last year is now in jeopardy.

Rep. Maxine Waters, D-Ca., who has a lot of pull in the Democratic party, has already asked Biden to rip up everything he’s accomplished on the crypto front. It’s a crying shame when partisan politics gets in the way of progress. This is why America is being left behind.

Last, but certainly not least, is the rumor that the next chairman of the U.S. Securities and Exchange Commission will be Gary Gensler.

As we know, after the grotesque-yet-welcome departure of Jay Clayton, Elad Roisman has stepped in as acting chairman.

Roisman is extremely pro-crypto, and just the thought that he might be heading the most important U.S. regulatory body was extremely enticing. Gensler’s not bad though.

At least he’s familiar with the lay of the land and seems to have an open mind and a willingness to move forward, which is ultimately good for bitcoin.