Man, the Fed will buy anything!

Over the weekend there was much discussion surrounding Congresswoman Rashida Tlaib who proposed the issuance of two platinum coins, each one worth exactly $1 trillion. Wait what??

The $1 trillion coin was first hypothesized during Obama’s response to the original financial crisis. And no, it doesn’t mean that we mint a coin with $1 trillion worth of platinum because that would be ridiculous. A coin like that would need to be approximately 50 meters in diameter and 1 meter high.

The idea is that the US Treasury would mint a regular size coin and assign it the value of $1 trillion, then sell it to the Fed, would could then create the money out of thin air and give it to the Treasury.

See, for the most part the Fed can only lend money to the US Government. With this thought experiment, the loan would be a bit more permanent as the Fed get’s to keep the coin and add it to it’s long list of inflated assets.

Unfortunately, or fortunately, whatever the case may be, it doesn’t seem like this plan is all too likely to happen. It would of course raise too many questions about how value is created and no doubt cause a bit of a political muss. Not that there isn’t one already. In any case, it seems like the Fed has committed to buying something a bit more intangible today…. the market. 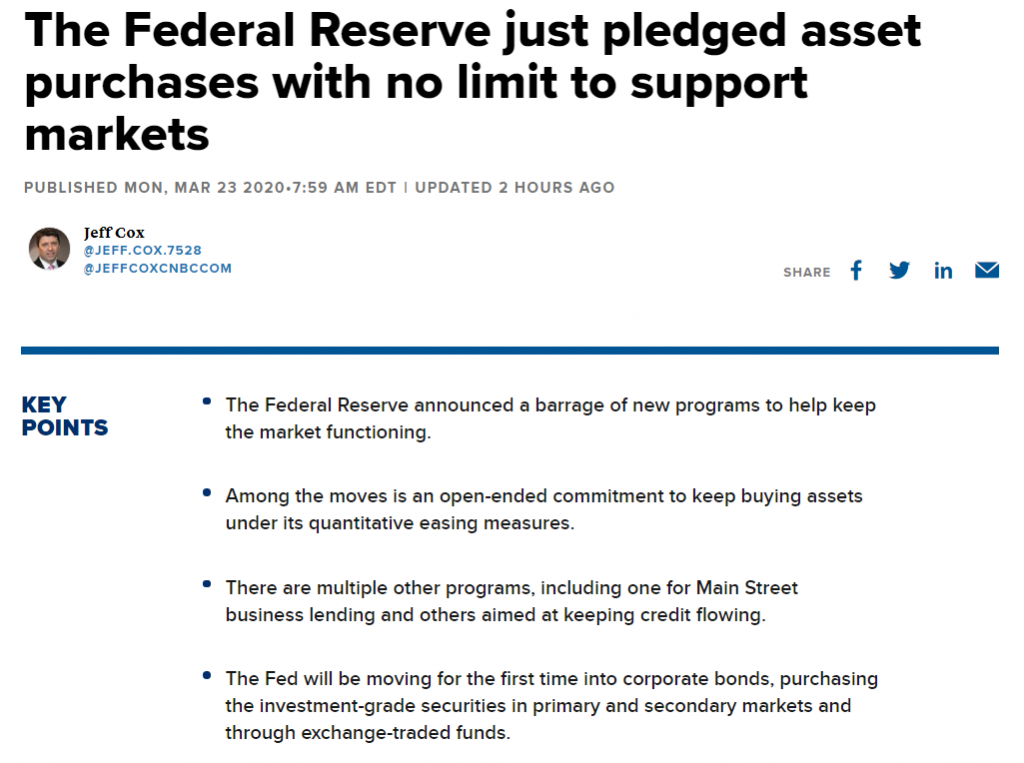 So, that’s a lot to take in. Let’s unpack that…

Oh. Yeah, that wasn’t too difficult.

The key word “unlimited” basically means that they can buy anything and everything that everybody is selling. Which in a way is good because there’s a sea of sellers at the moment. On the other hand, well, if you’re reading this then you probably already understand the implications.

RIP the free market. Or, whatever was left of it anyway. This idea of QE4 AKA QE Infinity has been going around for many years and now the prophesies have come true. Hope it helps stabilize the market at least.

The initial reaction to the Fed’s announcement has been quite positive. Stocks were sitting limit down when the news broke and actually managed to open the day in green. I did manage to get a screenshot of the markets about 40 minutes after the announcement. As you can see asset prices shot up across the board but none surged quite as energetically as bitcoin.

By now however, two of the three main US indices have succumb to losses and only the Nasdaq is holding any real gains. I guess the Fed really can’t cure the virus.

For now, we’re still waiting and watching the US Government try to pass the much awaited fiscal stimulus bill, that will likely include helicopter money and some level of universal basic income. However, Democrats and Republicans have been fighting for so long that it seems like they’re really forgotten how to work together to pass a piece of legislation. If they do manage to put differences aside and get it through, it should provide some level of relief for the markets.